Toppling of a cylinder on a block

A uniform cylinder rests on a cart.The height and diameter is given.coefficient of static friction is given.How can i find the minimum acceleration of block such that the block topples?

Morever what is the reason of toppling? 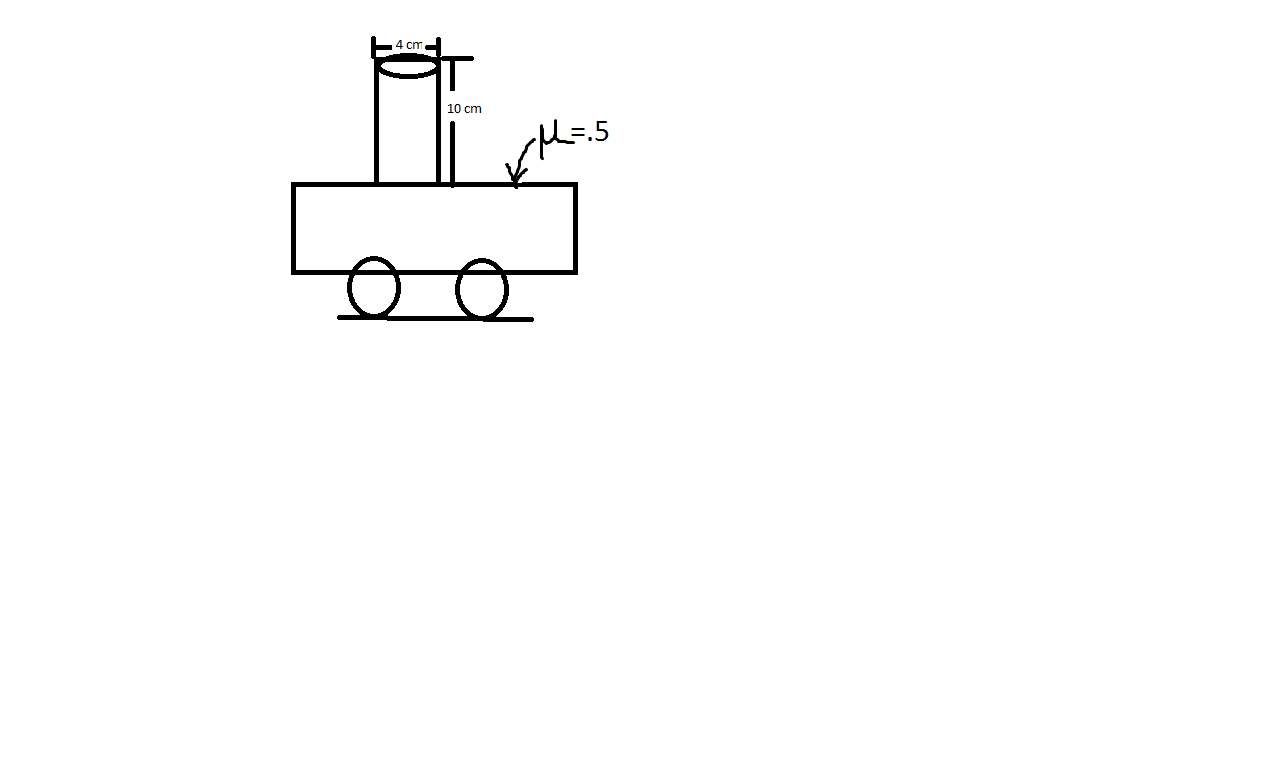 Again, if i consider static friction to be the cause,then what is the point of rotation?

If i consider the top to be te point of rotation,then why does the block topple with the lower end as point?I have conducted this experiment many times and if the block falls,it fell along the lower end.

This is how to think about the problem, not how to do the calculations.

An external force on the cylinder always accelerates the cylinder. It may also cause the cylinder to rotate. The rotation depends on where the force is applied.

The cylinder is made of many atoms rigidly connected together. If you pull on one atom, it exerts a force on its neighbors, which pull on their neighbors, and so on. The result is the whole cylinder moves or rotates, but distances and angles among the atoms don't change. These are internal forces. They change the motion of individual atoms. But since the sum is 0, they don't change the acceleration of the cylinder as a whole. We will mostly gloss over them.

In general, the goal is to think about the cylinder as a whole. You want to do calculations with mass, moment of inertia, external forces, and such. You don't want to think about atoms and the internal interatomic forces.

But to get the idea, we will look at the pieces of a simpler system. Three identical rigidly connected blocks are floating in space. You exert a force on the bottom block. 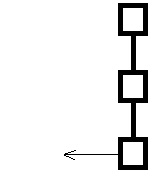 Forces and accelerations are vectors. You can add them together to see the total effect of multiple forces. This property of vectors is really useful. Sometimes replacing many little forces with one big force makes a calculation simpler.

Likewise, you can pretend that one force is really multiple forces, so long as the sum is the same, and you are careful to apply the forces at a points that produces the same torque. Sometimes this allows you to consider a problem piece by piece, where each piece is easier to understand.

You get the same accelerations (and therefore the same motion) with these three forces, because two forces on the middle block cancel. 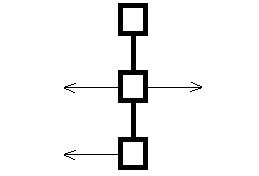 Divide the problem into these two pieces.

A force through the center of mass accelerates the system without rotating it.

Two equal and opposite forces, not on the same line, are a torque. They rotate the system without displacing the center of mass. The torque will move the bottom block forward, the top block backward, and leave the center block still.

For the cylinder, it may appear that the rotation is around the bottom of the cylinder because the bottom is at rest with respect to the cart. But the cart is moving.

To see why a minimum acceleration is needed to topple the cylinder, we will look at 4 blocks sitting on a cart. When the cart is still, there are two external forces: gravity and an upward force from the surface of the cart.

I have drawn the external forces off to the side. Gravity exerts a force $mg$ on each block. You should be able to see that this does not cause any rotation.

The cart exerts an upward force that is just strong enough to keep the blocks from penetrating the surface of the cart. This is $2mg$ on each bottom block. This does not cause any rotation.

We would get the same result if gravity was a single force, $2mg$, applied to each bottom block.

When the cart accelerates slowly, friction adds small torques and an irrotational force at the center of mass. This shows only the new forces.

Note that we would get the same result if torques like this had been applied.

The surface of the cart exerts an upward force just strong enough to keep the blocks from penetrating the surface. Notice the upward forces must be unequal to prevent rotation, which would cause the back block to penetrate the surface.

Now your job is to repeat this analysis with a cylinder instead of blocks.

Likewise the force of friction on each atom at the bottom of the cylinder can be rearranged.

Not the answer you're looking for? Browse other questions tagged homework-and-exercises newtonian-mechanics forces rotational-dynamics or ask your own question.

26
Why do we assume weight acts through the center of mass?
9
Is work done in rolling friction?
3
Why should angular momentum be conserved in this case?
3
Free-body diagram of a rack of blocks revisited a.k.a. if it were on top of lava, which block would you choose to stand on?
2
Which force makes the contact point of an object in rolling motion rise?
3
Does a planar object balance on a unique point?
2
Why does a body not rotate if force is applied on the centre of mass?
3
Why do we have to take torque due to pseudo force for an accelerating axis?
2
What causes a tall box to tip over on an inclined plane?
1
Why do motorcycles front wheels lift of the ground when accelerating quickly
See more linked questions

16
Block on a block problem, with friction
8
Why does a ruler continue to slide after toppling?
1
Determine the maximum ratio $h/b$ for which the homogenous block will slide without toppling under the action of force F
1
Minimum force necessary to keep block from slipping in a two-block system
1
Dynamic analysis of cylinder on top of moving plate
1
Tipping while moving forward?