My Question is how do electrons get energy/lose energy to jump up or down an orbital as in a stationary orbit they do not gain energy and their energy is finite?

If you take a hydrogen atom, that is the system of one electron and one proton, and you solve the Schrodinger equation for it then you get a number of eigenfunctions. These are the well known hydrogenic orbitals; 1s, 2s, 2p, etc. These solutions are time independant so an excited hydrogen atom like $2p^{1}$ will remain stable forever. I would guess this is what you mean in your question.

But in emission and absorption the system is not time independant because now we have a three component system of an electron, a proton and an electromagnetic wave (or photon if you prefer), and of course the EM wave has to be time dependant because it travels at $c$. The Schrodinger equation for this system is not the same as the Schrodinger equation for an isolated hydrogen atom, and the solutions are not the hydrogenic orbitals.

This is probably more intuitive for absorption rather than emission. In absorption the EM wave approaches the atom and perturbs it. This mixes up the hydrogenic orbitals so the atom is in a combination of different states, and as a result there is a non-zero probability that it will absorb the EM wave and settle into an excited state. But the equations of (non-relativistic) quantum mechanics are time symmetric, so if there is a finite probability for the atom to absorb a photon and change to an excited state, there is also a non-zero probability for an atom in an excited state to emit a photon and change to a lower energy state.

True in a given energy level, not an orbit, the electron does not radiate energy.

If there is an empty energy level below the one that the electron resides in, that is the electron is an excited state, it will radiate down to the next level emitting a quantum of radiation, 1 photon.

This can be modeled mathematically, and the inverse process, if a photon of an appropriate energy to kick it up interacts with the atom, can be calculated and the probability given.

See the gas discharge tube below: 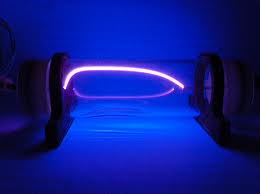 Electrons in an atom will naturally go to the ground state. An electron will keep on losing energy till it goes into the lowest energy orbital. So it will jump till it reaches the lowest level and it will go to higher energy levels only if it gains energy from an external source while it may be in a stable orbital.

For filling an atom with electrons in the Ground state, the lowest energy levels are filled first and consistent with the Pauli exclusion principle, the Aufbau principle, and Hund's rule.

Not the answer you're looking for? Browse other questions tagged energy orbital-motion electrons or ask your own question.

18
How do electrons jump orbitals?
11
Does an electron move from one excitation state to another, or jump?
9
How do electrons and photons interact?
5
Atomic Physics: stimulated emission
0
What evidence is there for quantum leaps?