In my exam today I've been given this problem, yet even with the results at hand I simply can't warp my head around it;

Given the picture below, a bar is placed on two conducting rails with a resistor (in the form of a single thin wire) at the left. Now at t=0 the magnetic field changes which causes the bar to move. (and a current flows through the "circuit").

The current can easily be found by Lenz's law: 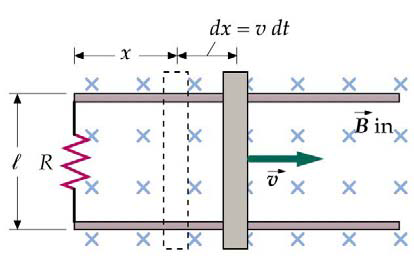 Now this is follow up text for the problem

It may be assumed that the conducting bar has a negligible mass and friction, so it will immediately move to a position $x$ in which there is no force exerted on it.

b) Explain why the relation between the actual position $x$ and the actual value of the magnetic field $B$ is given by $Bx = B_0x_0$.

What did the prof try to explain here? No force means constant speed, so not a "position" at all right?
Well the result sheet shows:

what???? Sorry but maybe it stems from the fact that I already didn't understand what "no force" meant in the text but I can't understand this.

(my original answer was wrong - I misunderstood the assignment.)

Why is the magnetic flux constant?

As the electric field induces weak current in the rod, magnetic force will pull the rod in the indicated direction with force $IB\mathscr{l}$. The rod will accelerate in the first instants, but since it is light-weight, it will quickly reach velocity that is sufficient for the magnetic electromotive force (opposes the current) in the $rod$ to counter-act the electric electromotive force of the changing external field in the $circuit$.

The force acting on the conducting bar will be given by:

But it is given that the bar has a negligible mass.So there can't be any force acting on the bar otherwise it would experience an "infinite" acceleration.

This in turn implies that the current flowing through the bar must always be zero.So there can't be a changing EMF and hence the time derivative of the flux will be zero.Thus,we have $$\frac{d\Phi}{dt}=0$$ $$Bx=\text{constant}$$.

3
Why is it assumed that magnetic forces arising from magnetic fields do not do work on a current carrying conductor?