How do I convert tangential speed to angular speed in an elliptic orbit?

I am running an animation of a satellite in an elliptic orbit (defined by a parametric equation for $x$ and $y$ as a function of $t$) and want to make sure the spacecraft is traveling at the right speeds at different points in its orbit. That is, it should go slower at is apoapsis and much faster at its periapsis. I can easily calculate the tangential speed of the satellite using this equation:

How do I convert this to the angular speed of the satellite at this point?

I've done extensive research (hours and hours) but haven't found anything of value. The closest thing was this expression of Kepler's Third Law:

For each time step in my simulation I use the satellite's current position in this equation to compute $\omega$ and then use the result to update the current $\theta$. This updated $\theta$ is then plugged into the parametric equation mentioned above to get the satellite's $x$ and $y$ position.

I can't find my mistake anywhere and would really appreciate it if someone could point it out to me.

Also, note that $\theta$ is the true anomaly, which is the angle between the direction of periapsis and the current position of the body, as seen from the main focal point (where the attracting body is). And $r$ is the distance between the current position and the focal point. If you want to use cartesian coordinates $(x,y)$, it is better to parametrize them using the eccentric anomaly $E$: $$ x = a\cos E,\qquad y = b\sin E. $$ 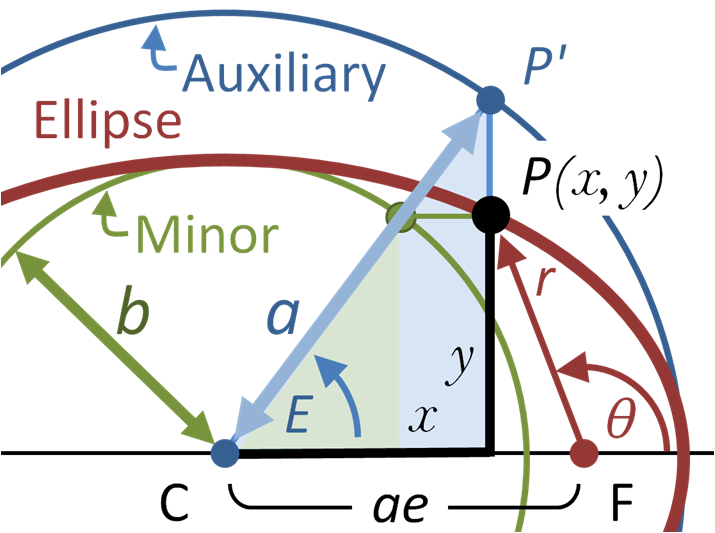 Not the answer you're looking for? Browse other questions tagged newtonian-mechanics orbital-motion space angular-velocity satellites or ask your own question.

16
What are common methods for calculating the time dependency of elliptical orbit?