There are systems that collect sun light in one spot. 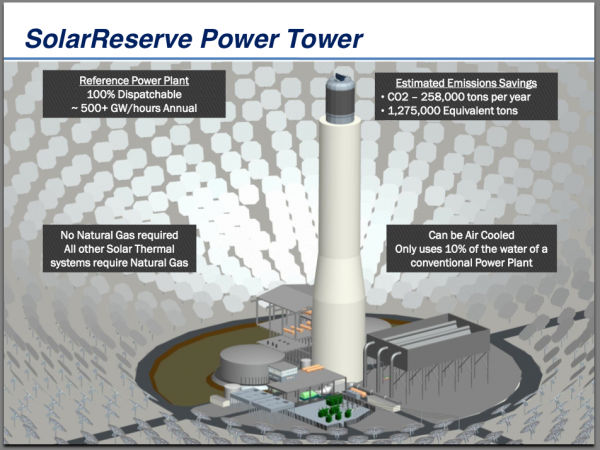 I wonder, why does it accumulate additively, without destructive interference?

All of which is beside the point, because sunlight is not coherent, or at least not very coherent, so you aren't going to get interference and you won't get a speckle pattern. Just a patch of uniformly bright light.

Short answer: On something operating with non-coherent light on the scale of a solar power collector, there is no net effect from interference. The increase in light intensity is not additive interference at all, but is simply that the light falling on a wide area is collected and focussed on a small area.

However, I'm guessing that there is some confusion on why interference doesn't seem to occur with sunlight. To understand what's going on here, let's ignore the solar power system, mirrors, etc., for a minute, and just think about the light that's arriving. Consider it as a lot of "parcels" of light.

If the sun were a laser, then the light from it would be "coherent" - i.e. the parcels would all have their peaks and troughs lined up with each other. If I were to hold my hand out to catch the light, the only thing that determined whether my hand intercepted a peak or a trough would be the distance that the light had travelled. However, the sun is not a laser, and so these parcels of light arrive out of phase with each other. If I hold my hand out to catch the light, no matter how far the light has travelled, I will catch some peaks, some troughs, and some in the middle.

Now consider a system with multiple beams that are joined in one point - such as the solar tower that you are interested in.

If the sun were a laser, then the different beams would have travelled slightly different distances, and so would arrive at different points in their waveforms, and so you would see an interference pattern: In one spot all the peaks line up, in another spot they cancel out, etc. This works because the light is coherent in the first place.

But as the sun is not a laser, the light is not coherent and there is a jumble of different phases arriving at the same time. Some of these will interfere with one another: but some will be constructive, and some will be destructive, at random. When you average it out over a large number of parcels of light, there is no overall effect from interference.

Well I thought John Rennie explained it as well as is needed.

The sun IS NOT a point source, or anything like one, since we can make highly detailed images of it even here on earth. So to talk about coherence, is absurd. It isn't spatially coherent from point to point over the image, and it isn't even temporally coherent for any diffraction limited image point.

So you will never see any interference effects on a boiler receiving surface.

And as John pointed out, the energy doesn't disappear in a real interference situation anyway.

Why do people think everything is a laser ?

And those mirrors used for thermal solar energy of the kind depicted, are not high finesse optics. They will work just fine, even if they are quite flat, because, if you made them paraboloidal, they have to have an enormous focal length so the f/number of each mirror is extremely small. It's cheaper to make them all flat, or else each one has to have a different spherical curvature. They might be slightly curved for surface stability; but they hardly need to be.

And yes the mirrors are totally additive, and each one has to be individually steered to track the sun.

When one is talking of energy, it is simpler to think "photons", because each photon carries an energy h*nu. When it hits a material the energy of each individual photon as it impinges on matter is finally totally absorbed by the material of the target, either turning into electricity or heat. In the photon quantum mechanical framework it is evident that destructive interference is not in the game. h*nu never disappears. (Even with coherent beams that show interference patterns this is true, the energy is displaced but does not disappear).

Now the classical electromagnetic wave emerges naturally from the underlying quantum mechanical stratum, and the result is the same. White light is composed of many frequencies, each frequency will have its own average electric field whose square is proportional to the energy density carried by the frequency. Integrating over all the average electric fields cannot become 0 in any part of space and time because the waves come incoherently and even if focused on a small area they are out of phase in space and time and an integral over the average energy in each frequency holds .

Not the answer you're looking for? Browse other questions tagged visible-light popular-science renewable-energy coherence or ask your own question.