This illustration summarizes my question: 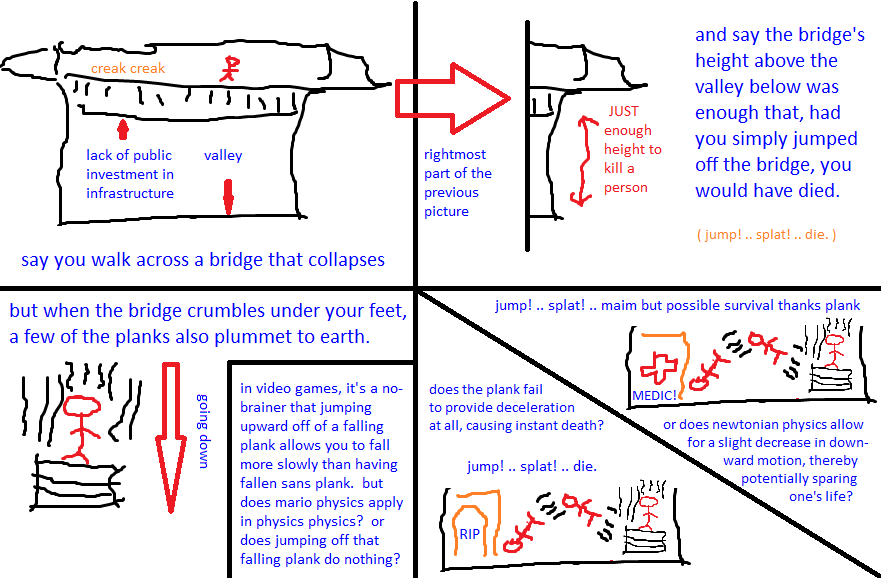 Please assume no air resistance (unless that makes a large difference). Here's what we concluded, but I could use both confirmation and also help with the math:

Yes, jumping off of a plank will move you "up", but the timing of the jump makes a big difference. If you jump earlier in the fall, you'll move up, but you'll also add to the distance of the fall.. If you jump at the very end, you're essentially not adding to the fall at all, so you're getting essentially the maximum effect. In order to minimize the velocity at which you hit the ground, the best strategy would be to jump at the moment before impact.

To keep the math simple, let's say you can jump one meter off of solid ground, and also that the bridge is ten meters above the ground.

If you jump the instant the bridge crumbles, then you're actually doing yourself harm, since you will then fall from 11 meters. If you jump a less than a meter into the fall, you may get back up to the height of the bridge, get to "rest", but then still fall from 10 meters, as if you had done nothing.

The closer to the ground that you jump, the larger the share of your jumping velocity that will be subtracted from your downward velocity without later contributing to your downward acceleration.

to keep the math simple, let's say you can jump one meter off of solid ground, and also that the bridge is ten meters above the ground.

I won't go into the qualifiers (others already have), so we'll take your formulation as absolute. But the problem information isn't useful in this form (as a height). It would be more helpful to get the velocity with which you jump off.

That's the upward velocity you impart to yourself. We're assuming this would be the same, no matter where it happens in the fall. Now we can do the straightforward kinematics. It gets a little messy. Here are some variables I'll have to introduce:

Now you divide the fall up into two segments, and then it's kinematics plug and chug.

The second equation above is quadratic, so you'll have to use the quadratic formula, and then plug into the 3rd equation. After that:

Again, h' is the independent variable, and we want to minimize the sign of v_f, preferably to less than what it would be if we didn't jump. The bridge is 50 meters high. Here is the plot.

The red line is the final velocity if no jump is made. The blue line is the velocity given that you jump at some given height (x-axis).

We see that even if you jump at the worst point (right as the bridge breaks), your final velocity won't increase by your jump velocity. This makes sense, because the system satisfies the energy balance, and not impulse balance, so there is a non-linear sensitivity. If you jump right before you hit the ground, obviously you've subtracted the jump velocity from your final velocity and this is the most effective point. There is only a small window where jumping hurts you, but this is in the height domain, so that's expected. If the independent axis was time, it would be a much larger window.

Technically, yes, the plank helps. However, in practise in a real situation the effect isn't really significant.

The first advantage to falling with a plank under you as you show in your bottom left picture is that it adds wind resistance. If the plank can stay oriented flat to the upward rushing air (from your perspective), then it will push upwards on the bottom of your feet. Overall, you+plank will have a lower terminal velocity than just you alone. In practise, this small decrease in your velocity is unlikely to matter. Whether you hit the rocks at the bottom of the canyon at 120 MPH and make a big splat, or at 80 MPH and merely crush your skull and break 20 bones isn't going to matter to you in the end.

Actively jumping from the plank also helps in theory but won't be much help in practise. The momentum of you pushing down on the plank will push you up, which will decrease your downwards velocity a little bit.

The best strategy would be to ride the plank down to near the end to gain as much advantage from the extra air resistance as possible, then jump or push them down as hard as possible. Again though, for a real case, this will only make a minor difference in how many pieces of you the coroner has to scrape off the rocks.

Even if the added air resistance doesn't help much with terminal velocity, you still want to "jump" as late as possible in the fall. Jumping in this case really means ejecting mass straight down. This gives you a upwards push, just like a rocket ejecting propellant down gets pushed up.

Think of the limiting case where you can eject the mass with such velocity that the upwards momentum on you exactly stops your fall. For a moment your speed is 0 hanging in the air, then its back to free fall after that. Ideally you want this moment to be just as you hit the ground, which would be the ideal soft landing case. Anything earlier, and you fall and pick up speed before you hit the ground.

If you "Jump" just as you start to fall (your speed is 0, but accelleration is now g down), you will actually go up a bit and in the end fall even further than without having jumped.

Assuming there's no air resistance, you're going to accelerate and fall at the exact same speed as the bridge. If you are standing up when it breaks, then you're going to stay in that same position: it is impossible for you to bend your knees without loosing contact with the plank. => You can't jump :o)

Not the answer you're looking for? Browse other questions tagged gravity velocity or ask your own question.

0
Jumping in an elevator?

5
Is it possible to have a floating bullet in the air?
0
Centripetal issue when considering gravity
0
A function for calculating velocity at several distances as you fall towards the earth's center
4
Super Heavy Brown Dwarf
18
Can you jump higher if you run? If so, why? (High jumping)