Why does noise affect FM radio less than AM?

Frequency modulated waves are less susceptible to noise compared to amplitude modulated signal. This is because the information in an FM signal is transmitted through varying the frequency, and not the amplitude. But why does noise affect changing amplitude and not frequency or other characteristics?

The idea that frequency modulated signals are more resilient to noise than amplitude-modulated ones is somewhat of a myth. Both are susceptible to noise: the demodulation sequence (including the human hearing and sight senses) reacts slightly differently to the effects of noise so that.

It can be shown that if there is additive Gaussian noise with frequency much less than the carrier frequency, one can resolve a signal, through the slowly varying envelope approximation, into in-phase and quadrature components as sketched in my drawing below: 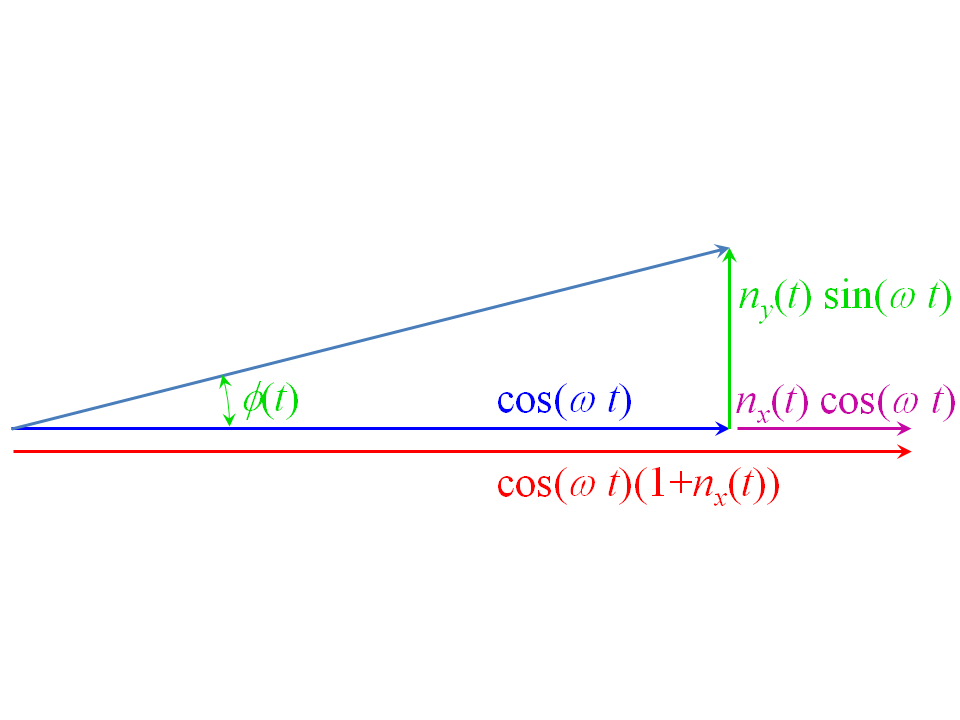 I represent the carrier $\cos(\omega\,t)$ as an $x$-(horizontal) direction phasor: an additive, narrowband Gaussian processes can be resolved into uncorrelated, zero mean Gaussian processes $n_x(t),\, n_y(t)$ with equal variance $\sigma^2$. We define the amplitude of the carrier to be one unit. An AM signal with rms modulation depth $\mathcal{M}$ has a signal of strength $\mathcal{M}^2$: the signal to noise ratio is:

Now the phase of the carrier is perturbed by a noise signal: with a slowly varying envelope approximation, the phase noise signal is $$\phi(t)\approx n_Y(t)$ radians.

To understand the effect on larger amplitude FM signals, we use the generating function identity for Bessel functions of the first kind to expand the signal $\cos\left(\omega \,t + \sqrt{2}\beta \cos(\omega_s t + \delta)\right)$ as a Fourier series to find that this is roughly the same as an AM signal (i.e. one looks at the first harmonic) with a modulation index $\mathrm{J}_1(\beta)/\mathrm{J}_0(\beta)$. So an FM or PM signal with rms phase modulation of $\beta$ radians is exactly as susceptible to noise as an AM signal with a modulation index $\mathcal{M}=\mathrm{J}_1(\beta)/\mathrm{J}_0(\beta)$.

There is also a perceived difference in the demodulated noise owing to the different technologies used to demodulate the signals. Phase locked loops tend to smooth out noise for modest noise levels, but fail catastrophically every now and then by cycle slipping. So noise on an FM signal tends only to be noticed as "burst" events. So for signal to noise ratios down to about 100 (amplitude ratios down to 10), FM audio seems better than AM of the same signal to noise ratio. However, at worse signal to noise ratios, FM fails altogether and is practically useless, whereas an audio signal sent by AM can still be understandable at 5dB SNR.

What really makes FM better than AM is that after the limiter there is the frequency detector, the "discriminator", that is effectively a differentiator. Using your diagram with the assumption that the amplitude is 1 the phase error is $\phi$ ~ $n_y$ whenever $|n_y|<<1$ (above threshold condition, in practice meaning CNR>10dB). Thus the FM noise or frequency error being the time derivative of this phase error, is $\delta f$ ~ $\frac{dn_y}{dt}$ the spectrum of which is thus proportional to $f^2$. This is zero at dc and most FM systems take advantage of this because most signals have their spectral content concentrated around dc and declining at higher frequencies. The high frequency noise beyond the signal's spectrum is removed by a low-pass filter following the discriminator. Further SNR improvement relative to AM can be had by actually predistorting the spectrum of the baseband signal by passing it through a simple high-pass filter before frequency modulation (pre-emphasis) so that the higher frequency spectral content is amplified relative to the lower frequencies. This pre-emphasis attempts to match the post-detection noise spectrum that is proportional to $f^2$. Matching here means that the signal's spectral density to the noise's spectral density ratio be approximately constant across the bandwidth of interest. After this filtering the signal and the remaining noise are passed through a low-pass filter (de-emphasis) to restore the original signal spectrum. (Of course these two filters can be combined into one.)

Not the answer you're looking for? Browse other questions tagged waves frequency noise electromagnetic-radiation or ask your own question.

1
Why are FM radio waves less susuceptible to interference than AM?
4
AM vs FM radio under bridges

2
Do Sidebands mean the frequency of an AM radio wave is not constant?
1
Does background noise while strumming a string affect the frequency recorded?
1
How is information transmitted by radio waves (how radios work)?
0
Why radio waves from radio-stations don't interfere with each other?
1
Why doesn't stochastic resonance allow us to ignore noise?
1
Does noise-cancelling cancel out the impact of a loud noise on your hearing?
0
Why does amplitude modulated wave take the frequency of a carrier signal when passed through air?