In calculating transition amplitude for Klein-Gordon real-scalar field, I encountered the integral,

I can see here the integrand has branch cuts at $ k= \pm im $ However, later they do a change of variables $ z= -ik $ and then the integral becomes, 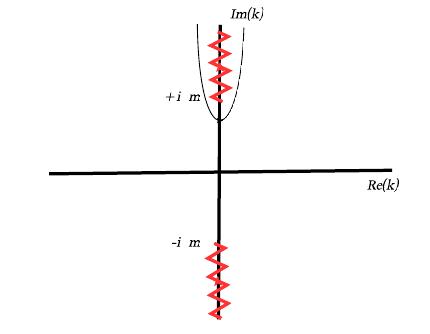 I am not able to see how this transformation happens and how the contour can be wrapped around the upper branch. Thanks for your inputs.

Here is a rough explanation of what they do. You start with an integral over a complex variable $K=k+iz$ along a path $\mathcal C_0$ (in the complex plan) that follow the real axis (that is a path characterized by $z=0$ and $k$ between $-\infty$ and $+\infty$). Calling $I$ the integral without the prefactors, we thus start with $$ I = \int_{\mathcal C_0} dK \frac{Ke^{iK\Delta x}}{\sqrt{K^2+m^2}}.$$ Now the integrand is analytic everywhere but on the cuts, so you can change the contour the way you want as long as it does not go through the cut, and the integral still converges.

The usual way to do this kind of integrals is to change the contour such that you just have to integrate around poles or along the cuts. But if you want to do that, you need that the contour has a contribution from $z$ at $\pm \infty$, depending if you go along the cut in the upper/lower half plan. Now you see the role of $\Delta x$: if $\Delta x>0$, $e^{iK\Delta x}$ converges/diverges if $z\to\pm\infty$, so you can't integrate along the lower cut (the integral is divergent), but you can for the upper cut. That's how you get the contour in your graph, let's call it $\mathcal C_1$.

With all that, you should be able to recover the result you are looking for.