Proposition: the event horizon and the apparent horizon of a black hole always coincide.

Question: The above proposition is known to be false. Can someone give a counterexample? As always for counterexamples, the simpler the better!

So basically, I know some differences between the two concepts, but I cannot think of a concrete example for which we can identify the apparent horizon and the event horizon, and see that they are different.

One simple counterexample is the observer moving in the Minkowski spacetime with constant acceleration. This observer perceives an apparent horizon - Rindler horizon, while there is no event horizon at all (and therefore no black hole). The existence of this apparent horizon leads to the Unruh effect - black-body radiation measured by such observer.

Consider a collapsing shell of dust in what is otherwise flat spacetime. Outside is Schwarzschild spacetime, inside it is Minkowski spacetime. There is a moment in time when the shell reaches its Schwarzschild radius $r = 2M$. The event horizon forms earlier, at the centre, and expands outward at the speed of light to reach $r = 2M$ at the same time the shell does. After that, the event horizon remains at $r = 2M$ forever. 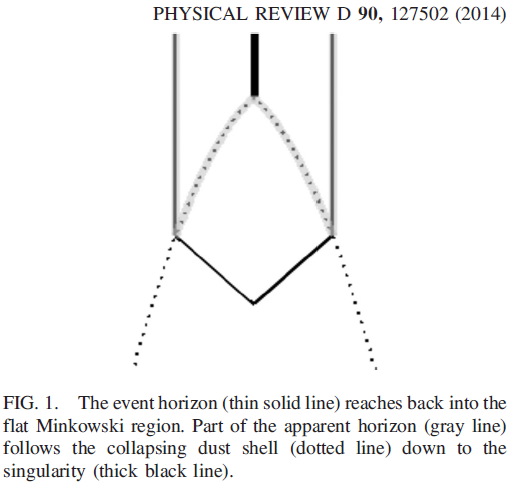 This example is taken from an excellent pedagogical paper by Matt Visser, "On the observability of horizons" (2014), see his Figure 1.

The Vidya metric is a counterexample. Any non-stationary horizon is as well.

11
In realistic gravitational collapse, can we have an absolute horizon without a trapped surface?