Why the galaxies form 2D planes (or spiral-like) instead of 3D balls (or spherical-like)?

Question: As we know, (1) the macroscopic spatial dimension of our universe is 3 dimension, and (2) gravity attracts massive objects together and the gravitational force is isotropic without directional preferences. Why do we have the spiral 2D plane-like Galaxy(galaxies), instead of spherical or elliptic-like galaxies?

Input: Gravity is (at least, seems to be) isotropic from its force law (Newtonian gravity). It should show no directional preferences from the form of force vector $\vec{F}=\frac{GM(r_1)m(r_2)}{(\vec{r_1}-\vec{r_2})^2} \hat{r_{12}}$. The Einstein gravity also does not show directional dependence at least microscopically.

If the gravity attracts massive objects together isotropically, and the macroscopic space dimension is 3-dimensional, it seems to be natural to have a spherical shape of massive objects gather together. Such as the globular clusters, or GC, are roughly spherical groupings Star cluster, as shown in the Wiki picture: 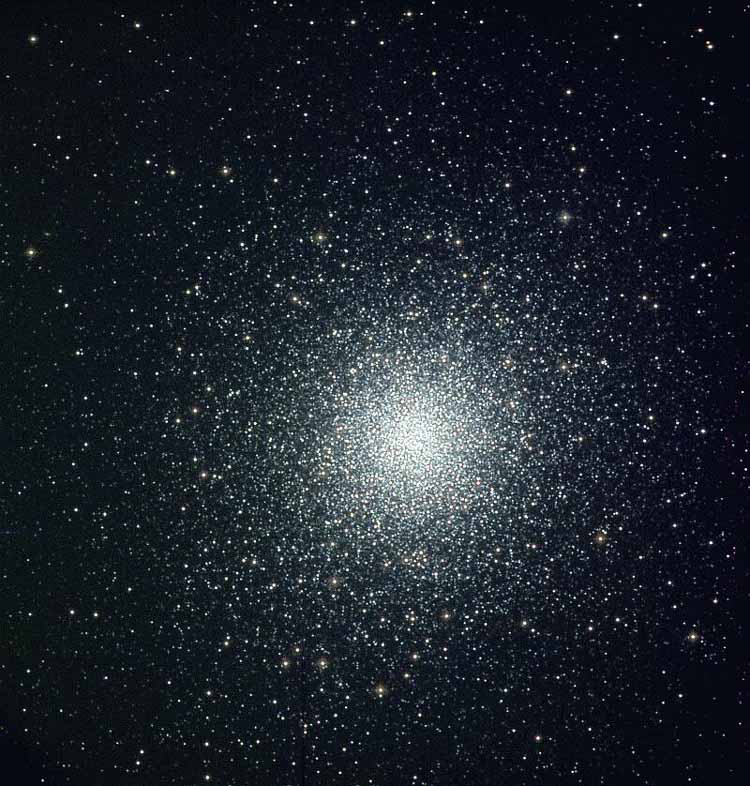 However, my impression is that, even if we have observed some more spherical or more-ball-like Elliptical galaxy, it is more common to find more-planar Spiral galaxy such as our Milky Way? (Is this statement correct? Let me know if I am wrong.)

Also, such have a look at this more-planar Spiral "galaxy" as this NGC 4414 galaxy: 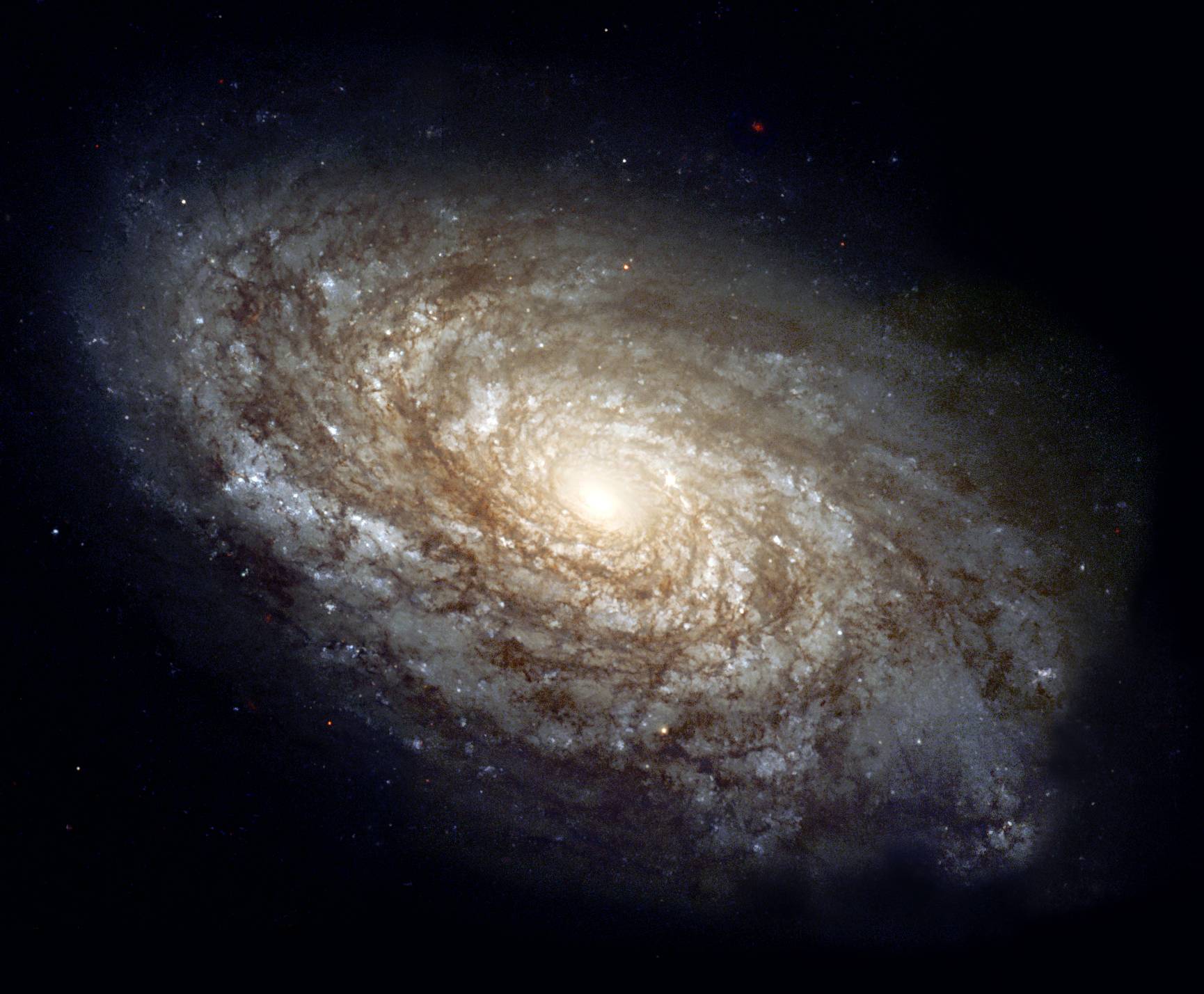 Is there some physics or math theory explains why the Galaxy turns out to be planar-like (or spiral-like) instead of spherical-like?

See also a somehow related question in a smaller scale: Can I produce a true 3D orbit?

p.s. Other than the classical stability of a 2D plane perpendicular to a classical angular momentum, is there an interpretation in terms of the quantum theory of vortices in a macroscopic manner (just my personal speculation)?

Thank you for your comments/answers!

Short answer: A spiral galaxy is, in fact, spherical-like.

To understand how, let us as a starting point look at Wikipedia's sketch of the structure of a spiral galaxy:

A spiral galaxy consists of a disk embedded in a spheroidal halo. The galaxy rotates around an axis through the centre, parallel to the GNP$\leftrightarrow$GSP axis in the image. The spheroidal halo consists mostly of Dark Matter (DM), and the DM makes up $\sim90\%$ of the mass of the Milky Way. Dynamically, it is the DM, that, ehrm, matters. And DM will always arrange itself in a ellipsoid configuration.

So the question should rather be: Why is there even a disk, why isn't the galaxy just an elliptical? The key to answering this lies in the gas content of a galaxy.

Both stars and Dark Matter particles - whatever they are - are collisionless; they only interact with each other through gravity. Collisionless systems tend to form spheroid or ellipsoid systems, like we are used to from elliptical galaxies, globular clusters etc.; all of which share the characteristic that they are very gas-poor.

With gas it is different: gas molecules can collide, and do it all the time. These collisions can transfer energy and angular momentum. The energy can be turned into other kinds of energy, which can escape, through radiation, galactic winds etc., and as energy escapes, the gas cools and settles down into a lower energy configuration. The gas' angular momentum, however, is harder to transfer out of the galaxy, so this is more or less conserved. The result - a collisional system with low energy but a relatively high angular momentum - is the typical thin disk of a spiral galaxy. (Something similar, but not perfectly analogous, happens in the formation of protoplanetary disks).

Stars also do not collide, so they should in theory also make up an ellipsoid shape. And some do in fact: the halo stars, including but not limited to the globular clusters. These are all very old stars, formed when the gas of the galaxy hadn't settled into the disk yet (or, for a few, formed in the disk but later ejected due to gravitational disturbances). But the large majority of stars are formed in the gas after it has settled into the disk, and so the large majority of stars will be found in the same disk.

So why are there even elliptical galaxies? Elliptical galaxies are typically very gas-poor, so gas dynamics is not important in these, they are rather a classical gravitational many-body system like a DM halo. The gas is depleted from these galaxies due to many different processes such as star formation, collisions with other galaxies (which are quite common), gas ejection due to radiational pressure from strongly star forming regions, supernovae or quasars, etc. etc. - many are the ways for a galaxy to lose its gas. If colliding galaxies are sufficiently gas-depleted (and the collision results in a merger), then the resulting galaxy will not have any gas which can settle into a disk, and kinetic energy of the stars in the new galaxy will tend to be distributed randomly due to the chaotic nature of the interaction.

(This picture is simplified, as the whole business of galactic dynamics is quite hairy, but I hope it gets the fundamentals right and more or less understandable).

The standard wisdom is that elliptical galaxies have formed form the merger of two or several smaller spiral galaxies. In such mergers, the collision-less nature of the stars means that they will not stay in a disc. Rather energy form the orbit of the progenitor galaxies is transferred into internal energy (which cannot be radiated away as with gas discs), evolving the stellar distributions away from their near-minimal energy state (at given angular momentum), i.e. away from a disc. Additionally, the interaction between the two galaxies re-distributes the individual stellar orbital angular momenta and their orientations, so that they are no longer correleated (as in a disc).

The gas undergoes a completely different fate during a merger. It collides and shocks, then cools and forms stars or is funneled onto the central super-massive black holes, where it may turn on a quasar. Energy and momentum feedback from both the quasar and the supernovae resulting from new born massive stars are well capabable to drive out all remaining gas and leave the galaxy gas poor. Some elliptical galaxies still have a small gas disc and there are also intermediate, so-called S0, galaxies with a clear disc and a substantial spheroidal component.

This is due to spinning forces, such as centrifuged force. Remember that galaxies form (at least the regular ones) from the spinning of matter around a galaxy nucleus.

So, you're not wrong. Gravity is isotropic, but in this cases the spinning forces are the definition to the galaxy form.

Not the answer you're looking for? Browse other questions tagged gravity angular-momentum astrophysics galaxies star-clusters or ask your own question.

46
Why aren't there spherical galaxies?
4
Why is the Milky Way flat?
2
why galaxies look like discs rather than spheres?
0
Why are galalxies spiral?
0
Why does most galaxies resemble a 2 dimensional plane?
0
Shape of galaxies
64
Why does everything spin?
49
Why are our planets in the solar system all on the same disc/plane/layer?
18
Why do all the planets of the solar system orbit in roughly the same 2D plane?
11
Shapes of galaxies
See more linked questions

0
Can one model a spiral galaxy with a similar manifold to one for a whirlpool?
4
What is the average mass of galaxies according to Hubble Deep and Ultra Deep field observations?
1
Do Massive Twin Quasar Jets Condense into separate Spiral Galaxies?
3
Did dark matter cause the formation of the Solar System?
0
Gravitation and the structure of galaxies
0
What models do physicists use in predicting the movement of stars in a galaxy that has lead to a wide-spread conviction that Dark Matter exists?