Accelerated liquid in a U-tube

Consider a U-tube containing some liquid. The two ends of the tube are connected to closed volumes of air with different initial pressures, such that there is some difference in the liquid levels inside the tube. Assume that the U-tube has uniform cross section, the liquid is incompressible, and there are no losses.

Now, if the U-tube is accelerated vertically, will there be any changes in the liquid level at one leg relative to that in the other, and why?

I initially thought they would change. When the tube is accelerated upwards, the liquid in the tube would tend to move from the leg with higher liquid level to the other leg. The increased pressure that drives it is given as $\rho d a$, where $\rho$ is the liquid density, $d$ is the initial difference in the liquid levels of the two legs, and $a$ is the acceleration of the U-tube. But then, I thought there should be an equal and opposing pressure increase from the leg with lower liquid level, which prevents the liquid from moving. But I am not sure.

The difference in water column changes depends on how fast you accelerate.the pressure in the sealed side is compensated by the difference in water column height on the open side of the tube.this pressure is the product of mass of liquid column and and acceleration due to gravity (9.8m/sec^2) at rest and area.when you accelerate the tube upwards the water column (differnce in height) will have more value for g depends on how fast you move.it reaches to an acceleration where the weight of liquid column overcome the pressure on the sealed side thereby changing liquid height. 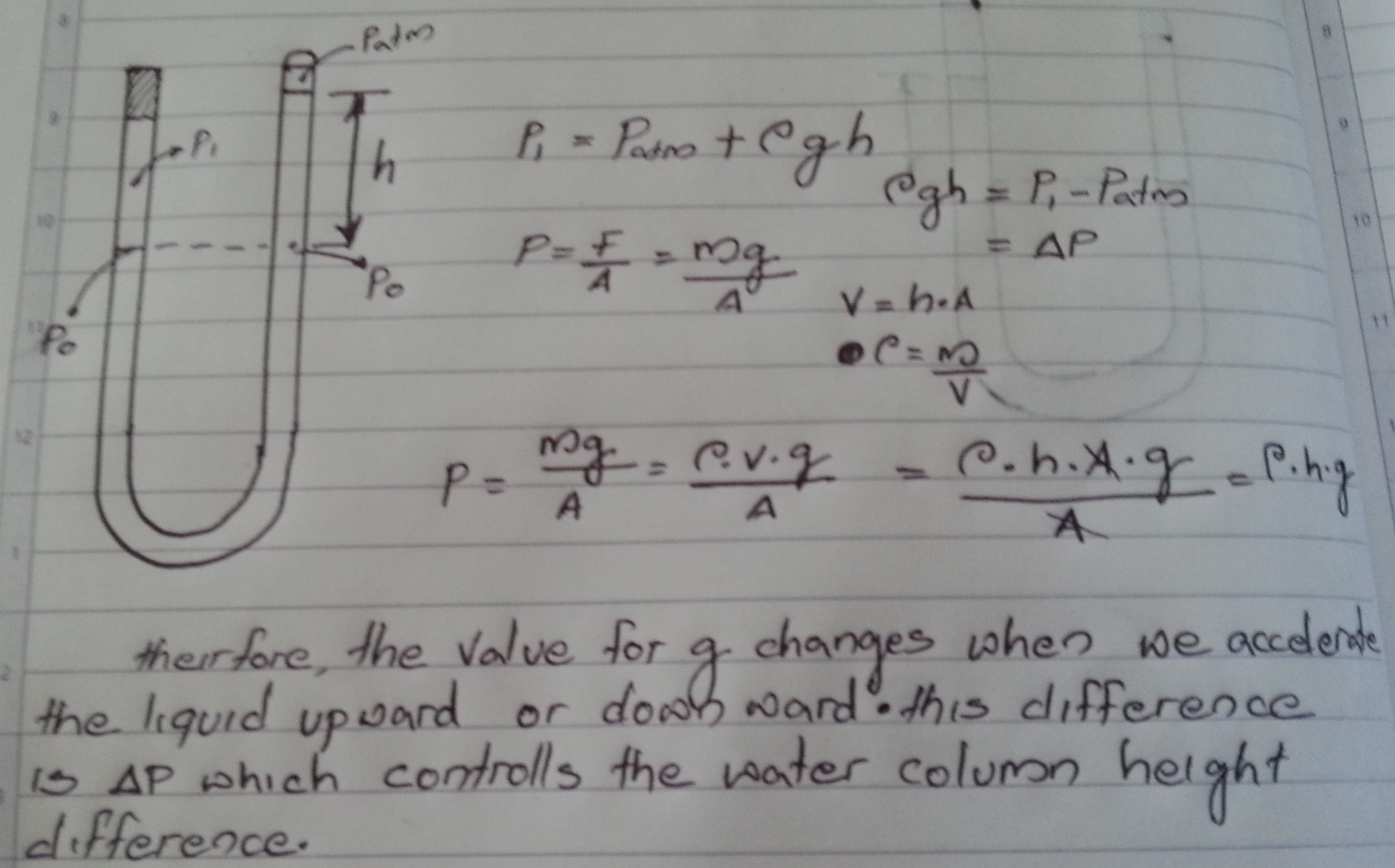 Not the answer you're looking for? Browse other questions tagged pressure acceleration reference-frames or ask your own question.

1
Pressure $p$ in the Bernoulli equation
4
Atmospheric pressure changes on plastic bottle containing a liquid
3
Concept regarding Ventury Tube-Bernoulli application
4
Pressure variation in a capillary tube
0
Pressure of 2 immiscible liquids of diffrent density in a u tube
1
If a free jet of liquid is exiting from a tube into the air, why is the pressure of the liquid exiting atmospheric when not submerged?
6
How does the pressure at point A in the tube change when the tube is accelerated horizontally?