QED coupling constant at one loop

On page 257 in Peskin's QFT book a qualitative sketch of the QED coupling is given (see the picture below). Why should I expect such a behavior from QED? The QED beta function is $$\beta_{qed}=\mu\frac{dg}{d\mu}=\frac{g^{3}}{12\pi^{2}}$$ So why the fixed point is not zero? Is there a need to go beyond one loop here? Is this figure enough to determine that QED has a bound state of electrons or photons in high enough energies? 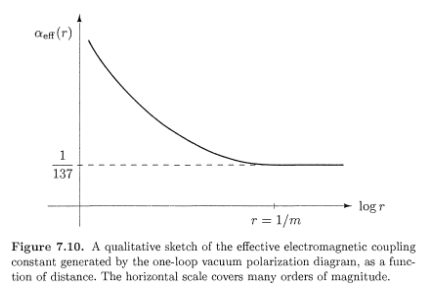 This is like the method of dominant balance (for solving differential equations). The equation for the beta function you have written down, is only true approximately, when the energy scale is much larger than the electron mass.

At smaller energies, the other (neglected term) in the beta function becomes more and more important, since $g^3$ is pretty small. Due to this crossover, the coupling stops getting renormalized after this scale (electron mass) and freezes at the value $\alpha^* \sim \alpha (m^{-1})$, and this is the value of the coupling constant for $r > m^{-1}$. So the graph flattens out before the coupling becomes zero.

If the electron was massless, then the coupling would keep varying even at larger length scales, and the potential between two charges, for $r \to +\infty$, would look like $$V(r) \sim \dfrac{\alpha(r)}{r} \sim\dfrac{1}{r \log r}$$

I don't have the book with me, but somewhere (maybe in the same chapter), they discuss the potential felt by two electric charges in real space. In momentum space, the potential is roughly $\alpha(p)/p^2$, that you can transform back to real space, for static charges, calling $\alpha(r)$ what is different from $1/r$ in the potential (i.e. $\alpha(r)\equiv r V(r)$).

Then, we can ask the meaning of the graph. From the renormalization flow of $\alpha(\mu)$, we know that $\alpha$ increases when $\mu$ increases, that is, at high energy, the interaction constant is larger and the potential in real space will be larger at short distance (because short distance "=" high energy). The physical picture is that when you look closer than the Compton length of the electron (of order 1/m), the bare charge is less screened by the vacuum fluctuations of electron-positron pairs.

If the electron was massless, the RG flow of $\alpha(\mu)$ would imply that $\alpha$ goes to zero at very large distance. However, the mass of the electron stop the flow at $\mu\simeq m$ and $\alpha(\mu)=1/137$ for $\mu<m$, that is, the potential in real space is the usual Coulomb potential behaving as $1/r$.

(By the way, there is no bound-state of electrons and photons...)

Not the answer you're looking for? Browse other questions tagged quantum-field-theory quantum-electrodynamics renormalization or ask your own question.

17
Infrared-free QED and Higgsless standard model phenomenology
2
Photon one (odd) point function in QED
7
Why does the divergence of a QFT's coupling constant under RG flow trivialize the theory if it occurs in the UV but not in the IR?
2
Tensor structure of the one-loop vacuum polarization in scalar QED
4
On renormalization of $\phi^4$