How Does Lead Block Radiation

How is it that lead can block radiation, and things are lead lined. In the Indiana Jones 4 movie he climbs inside a lead-lined fridge and he somehow survives the blast and radiation?

Lead is used to block radiation because:

Some additional information about shielding with high Z materials:

According to Table 3 in http://iopscience.iop.org/0022-3700/8/12/014/pdf/jbv8i12p2015.pdf, there is a strong relationship between the atomic number of a material, and the photoelectric cross section (the probability of a PE interaction).

Plotting the numbers for incident gammas of 25 keV, with the $Z^4$ on the X axis and the cross section (in barns) on the Y axis, gives the following plot: 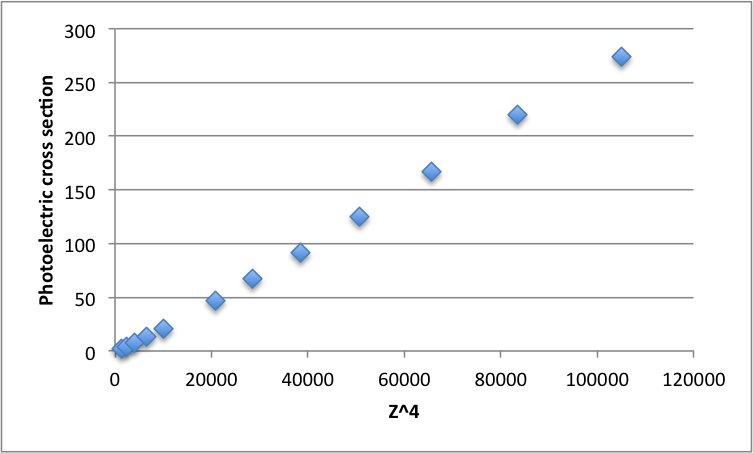 As you can see, the $Z^4$ relationship works reasonably well (over this range of atomic numbers, from Carbon = 6 to Argon = 18).

This effect dominates the effectiveness of shielding materials in the range where photoelectric effects are important (roughly up to the binding energy of the innermost electrons). At higher energies, Compton scatter takes over - at that point, the electron density is the thing that matters (closely related to the density of the material - although hydrogen is an exception with roughly twice the number of electrons per unit mass compared to any other materials). Note that density and atomic number don't necessarily scale: tungsten has a lower Z than lead, but is much more dense. For my money, I will take 10 mm of tungsten shielding over 10 mm of lead shielding.

If you need a thin shield, there is nothing quite like density: lead, tungsten, gold, platinum, iridium... but of these lead is the cheapest by far (and easy to machine / mould). If you need a cheap shield, and size doesn't matter, then water is a much better bet (lots of electrons for very little money). This is why spent fuel is usually stored in pools of water (with the added benefit of cooling).

In an atomic blast, the gamma rays and neutrons are the thing to worry about. Lead is not a particularly effective neutron shield - light atoms are much better since the neutron will lose more energy in each collision (momentum transfer).

Ordinary people will not survive an atomic blast at close range because of a few mm of lead. But this is movie physics...

10
What other shielding material than lead is effective against gamma rays?
5
How does radiation degrade mechanical parts and electronic devices?

4
Can a nuclear reactor meltdown be contained with molten lead?
1
Explosion of a Neutron Bomb
2
Leakage of X-ray radiation
5
How does radiation degrade mechanical parts and electronic devices?
4
Temperature effects on lead against radiation
4
Neutron Radiation
5
Can a single piece of paper really block all non-electromagnetic ionizing radiation?
0
How can radiation negatively ionize an atom?
0
How does gamma radiation ionise atoms?