What's an atomic superstate/superposition, and how is it possible?

What's an atomic superstate/superposition, and how is it possible?

I understand the basics - being something can be moving and staying still at the same time; the observer changes the behaviour - but I'd like to know a little more, as it interests me, and how is it possible without actually interfering with said thing?

Superposition is often claimed, particularly in popular physics texts, to be "an object that is in two states at once", but this is in fact quite misleading. Superposition states, in fact, go beyond this property.

Say I have a box, and I claim that it

contains a cat that's both dead and alive, with the proviso that when you actually look at it you will only see one of the states, with probability 1/2 for each.

How can you tell that that's the case? The only thing you can do, of course, is to look inside the box. Suppose, when you do, that you find a live cat. How do you know that I didn't just give you a box with a live cat? You should really ask me for, say, a thousand boxes with such undead cats. You look inside them and you find, say, 508 live cats and 492 dead ones. In the limit of very many boxes, you can convince yourself that half the boxes will contain dead cats and half of them live ones.

The problem with this experiment, which is the only way to test my claim, is that it can be reproduced classically: all I need is a way to randomly kill half the cats. That way, the box I give you actually contains a live or a dead cat, with no weirdness involved, and simply a lack of knowledge.

So much, then, for what a superposition state is not. What about what it actually is? Here's one fruitful way of thinking about it (though it's obviously not the only one). Let me set up some mathsy ways to describe things first, and I'll go back to the physics in a bit.

Classically, I can produce a state of the box that has a live cat with probability $p$ and a dead one with probability $1-p$. Such states, which I'll denote as $$\text{state}=p\text{(alive)}+(1-p)\text{(dead)},$$ can be thought of as occupying a line segment between the $\text{(alive)}$ state and the $\text{(dead)}$ state, which is parametrized by $p$. Similarly, the pure quantum superpositions can be written as $$|\text{state}\rangle = \cos\frac\theta2|\text{alive}\rangle+\sin\frac\theta2|\text{dead}\rangle.$$ Here $\theta$ is some angle which parametrizes the probability of you finding the cat alive or dead when you look at it, which are $\cos^2\frac\theta2$ and $\sin^2\frac\theta2$ respectively, but most importantly the coefficients can have a sign. That means there are two equal-probability superpostion states, $$|+\rangle=|\text{alive}\rangle+|\text{dead}\rangle$$ and $$|-\rangle=|\text{alive}\rangle-|\text{dead}\rangle.$$

All of this can be expressed graphically like this: 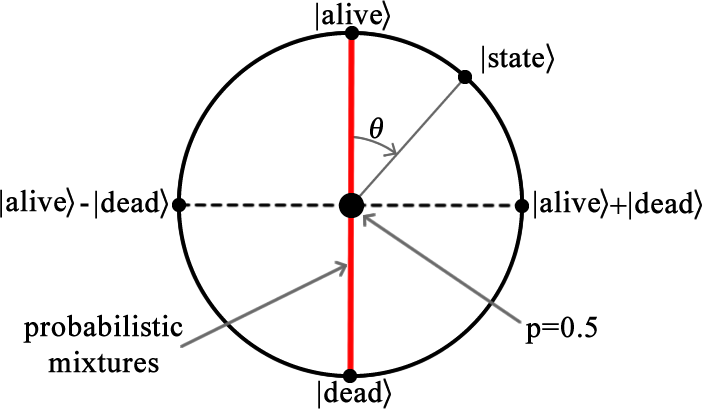 OK, back to the show.

The machine I used to make those classical boxes works like this: it takes live cats, at the top of the circle, and it pushes the state along the red line until it gets to the middle.

A quantum superposition machine, on the other hand, would take an $|\text{alive}\rangle$ cat, and it would rotate the whole circle by a quarter turn to the right. When you look inside the box, you project the state orthogonally onto the red line and that decides what probability you have of observing a dead or an alive cat.

I argued at the start that if you run both machines once, there's no way to tell the difference. However, things are very different if you're allowed to run them more than once. Say, then, that you run a box through the quantum machine once. You know from experience that if you looked at it you would have a fifty-fifty chance of each outcome, but instead of doing that you specifically don't look inside, and you run it once more through the machine. This rotates the machine by another quarter-turn to the right, and takes the $|+\rangle$ state straight to the $|\text{dead}\rangle$ state. If you run a box through the machine twice, you will always get a dead cat.

That is impossible in a classical machine. If the machine takes alive cats and kills them half of the time, then (regardless of what it does to dead cats) if you run a box twice you must observe live cats at least 25% of the time (and more if the machine is allowed to 'revive' cats if they go in dead).

Similarly, if you run a dead cat through the quantum machine (or if you run a live cat three times) you will get the other equal-probabilities superposition state, $|-\rangle$. A classical machine can also match this behaviour, by reviving dead cats half of the time. However, such a machine gets into more trouble after two steps (if given a 50%-chance probability state, it returns alive cats 50% of the time). After four runs through the machine, similarly, you will have a 50%-chance state in the classical case, but the quantum box will have gone full circle and will always contain a live cat. This is essentially impossible for a classical machine.

(To be completely technically correct, this is actually possible to a limited extent if the machine is allowed to write information on the side of the box, though this requires more and more information depending on the angle $\theta$. Without such information, though, it is impossible.)

I hope this leaves you a feeling for what a quantum superposition is. I have not addressed, of course, how you actually make such beasts. For that, there are already many good questions on this site, such as this one or this one.

First, note that a superposition is something that happens in the theory of Quantum Mechanics. The state of any quantum particle can be viewed as an abstract mathematical object called a state vector (like the ones for the cat in @Emilio_Pisanty's answer). What we call a superposition is a state which is the sum of two or more state vectors, which is itself also a valid state.

What is special about this idea of superposition is that it allows a state to be a sum of other states that can have different values for observables (quantities you can physically observe, such as the velocity, which you use in your question).

For the sake of shortness I will omit the details of the measurement, the important part is that when you measure something in Quantum Mechanics the result is always probabilistic. For example, taking the idea in your question we could have:

The bottom line is, before you measure it the atom is just in some physical state that has no definite velocity. The information the state vector gives us is the likelihood of finding a result of a measurement. In fact, trying to attribute a definite velocity to the atom would violate one of the fundamental principles of quantum mechanics, the Heisenberg uncertainty principle. The problem here lies in trying to explain non-classical objects with classical physics.

Basically the superposition allows you to think that the particle seems to have multiple states. When you observe it, it must "decide" or collapse to one single state.
I see this as a probability outcome.
Lets assume a much simpler probability scenario: a coin.
I know that the coin has two faces, each with equal probability to show up if I flip the coin in the air.
This means I have 2 superpositions, as long as the coin is flipping, it is 50% heads and 50% tails.
Once the coin lands, it must "collapse" to a single stable state: either heads or tails. It becomes 100% of either. But you don't know until you see it. So if you flip the coin and cover it in your hand (without watching), for you, the observer, it is still 50%-50% for either heads or tails, because you don't know the outcome, but once you see it, you are 100% certain and the coin is either 100% heads or 100% tails.

Not the answer you're looking for? Browse other questions tagged quantum-mechanics hilbert-space atomic-physics superposition quantum-states or ask your own question.