Why do the passing objects' shadows run in the direction of the moving train?

While travelling in the train on the sunset, I have noticed the strange phenomenon. The shadows of the lonely trees and lampposts, that stay along the railroad, are moving on the wall in the same direction as the train. I tried my artist talents to express the situation as a picture: 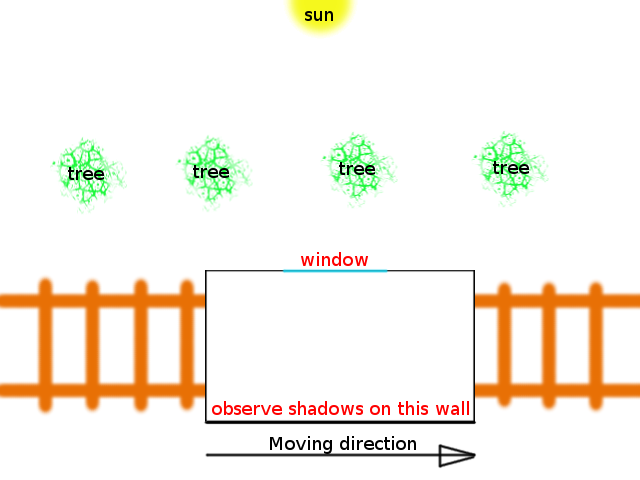 As far as I understand, the shadows should move in an opposite direction.

I have found the evidence video - and converted it into an animated gif:

The shadow runs on the left wall - from the the camera point of view. So, from the man's point of view, the shadow moves in the direction of the train, if it's observed on the wall behind the camera.

Perhaps the window in the darkened compartment is acting as a pinhole camera and showing a blurry image of the scene outside inverted?

I'm a bit confused by your observation.

Here's a simplified diagram that I used to figure out what direction the shadows appear to move relative to the train.

The two figures side by side are identical except for the location of the train. In the second figure on the right, the shadow appears to be more toward the rear of the train than it was.

So I suppose I'm equally confused as you. The observations you made aren't consistent with geometric optics, unless there is something a little more subtle going on, like some reflections or lensing effects I can't quite fathom in this context.

When the train is moving, the light that causes the shadow actually moves in opposite direction to that of the train.

When the light source is perpendicular to your direction of motion it is casting a shadow directly opposite. now, when we move little further(i.e. the screen on which the shadow appears has moved a little distance further), so the shadow of the object, which is caused by some diffused light (no longer the direct light as before) becomes longer and appear at a direction no longer perpendicular to the direction of motion.

In effect, since the screen on which the shadow is casted is moving forward, the source causing the shadow is moving backward farther.. and this causes the appearance of a longer and larger shadow that appears to move in the direction of the train.

Because a line between the Sun and the train would move at the same speed as the train relative to the trees. Giving you the illusion that the Sun is moving too. If you stand amoungst the trees you will see the shadows appear first at the front of the train and move to the back. These are the same shadows someone on the train is seeing.

Not the answer you're looking for? Browse other questions tagged visible-light everyday-life geometric-optics shadow or ask your own question.

165
Why do shadows from the sun join each other when near enough?
6
Why does the point of intersection of two shadows look brighter?
85
Why don't fluorescent lights produce shadows?
3
Why does my lampshade cast shadows right near the bulb?
1
Why don't flying birds have shadows?
2
Why are Shadows formed?
1
Why are shadows more defined the closer you move the object to the surface the shadow forms on?