Looking for an intuitive understanding of normal force

I understand normal force to be the perpendicular force to a surface of contact. However, I have come across a problem which has caused me to rethink this.

My initial understanding of force is demonstrated by the following diagram of an object sliding down an inclined plane. 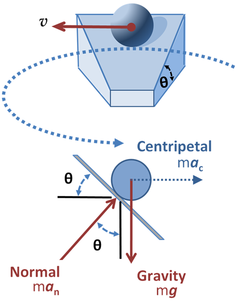 This is taken directly from Wikipedia here. It says that $F_N = F_g/cos(\theta)$ which is bigger than in the first scenario.

Why is the normal force different here?

The normal force comes from Newton's third law, as a reactive force. Before there is any centripetal accel, $F_{N}$ was $F_{g}∗cosθ$, but after there is centripetal accel, $F_{N}$ changes to $F_{g}/cosθ$. This makes $F_{N}$ larger in the second scenario even though there is no more force acting in the direction of the ground. What causes the increase in $F_{N}$? Something must push against the ground in order for $F_{N}$ to push back.

My thoughts and attempts at solving this:

There has to be a force acting in the direction of the road in order to increase the value of the normal force. I think this force comes from the fact that the car's velocity is causing a force on the road, pushing in to the road because the car's velocity wants to go straight, but the road is shaped in a curved bank so the car cannot go straight; the normal force of the road pushes back, which allows for the centripetal acceleration.

I think the normal force is a result of the car's (the ball in this case) velocity against the circular road causing the road to push back. I lack the mathematical ability to describe it.

But if you see from ground frame the normal partly provides the centripetal force and also cancel outs the gravitational force i.e.

In both frames as normal is involved in dealing with both forces it is greater than just the component of gravitational force.

Suppose I placed a block on a table and lent on the top of it. There would be a downwards force on the block due to its weight, and a further downwards force on the block due to my arm. But the block wouldn't be moving --- it wouldn't be accelerating in the slightest. And so, by Newton's second law, there must be no force acting on it! What this means is that the table must be exerting a force equal in magnitude to the sum of both the weight of the block and the force from my arm, but upwards, so as to cancel everything out.

Hopefully this is familiar to you. The point of all this is that normal forces (and more generally, constraint forces) vary in just such a way as to maintain a certain condition --- in this case, it's the condition that the block doesn't sink into the table. You might be used to $N = mg$ or something similar, but that doesn't have to be so. Indeed, if I attached a string to the top of the block and pulled slightly on the end, the normal force would be less than $mg$. This is because we already have an upwards force acting on the block --- that due to the string --- and so the table doesn't have 'as much ground to make up' when it comes to making sure all the forces are cancelled.

With this said, let's approach the two systems you're looking at. You asked: "why is the normal force not $F_g \cos \theta$ like it was in the last problem?". I could ask you: why should it be the same? The two systems are rather different: one involves a stationary block, the other a ball undergoing circular motion, and we've seen that normal forces can vary from circumstance to circumstance. A priori there's no reason to assume that the normal forces should have the same form. But let's consider specifically why they don't.

In the first case, the block isn't moving and so (since its acceleration is therefore zero) the net force is zero. Or at the very least (suppose that in actual fact the block was sliding along the plane) we can say that the block isn't moving in the direction perpendicular to the plane, and so the forces in that direction add to zero. The component of the force of gravity in this direction is $F_g \cos \theta$, whereas the component of the normal force in this direction (which is just the total normal force) is $F_N$. These forces must cancel, and so

if indeed the vertical forces are to sum to zero, as we require. The other equation --- that for components in the horizontal direction, will look like this

1
In A Banked Turn, How Much Of A Part Does Gravity Play As Compared To The Normal Force?

2
Is my understanding of the mechanics of skidding correct?
3
Cylinder rolling down an inclined plane held by a string
0
Banked Curve with friction
0
Why resolve some forces into components and not others?
0
Components of normal reaction in banking of roads
1
Newtonian Mechanics cannot be applied in non-inertial frame of reference then how can we apply formula for normal force in an accelerating elevator?
0
What causes an object to move up a frictionless banked road?