Work done by Lorentz Force in case of motional emf

In the classical example of the slidewire generator where the rod slides on a U-shaped conductor in a magnetic field, we get a charge separation due to the Lorentz force. The way the induced emf is usually derived is the following: $\mathcal{E}=W_l/q=vBL$ where $W_l$ is the work done by the magnetic (Lorentz) force. But we know that work is defined as a scalar product of force and displacement. In case of Lorentz force, which is always perpendicular to the velocity vector, the scalar product should always be zero. So why then we allowed to use the above expression?

It even confuses me more, because later on the book states:

But the Lorentz force does no work, so where does this energy come from? It turns out that there is another Lorentz force acting in the system due to the relative motion of the charges...

So, on the one hand it derives motional emf by assuming $F_l$ does work $W_l$ and on the other hand, it says later that it does no work (which can cause a confusion because heat is still being produced in the circuit). 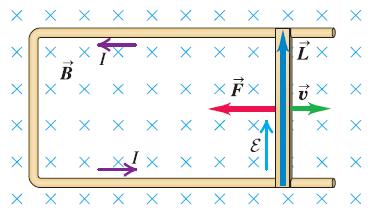 There are two things that lead to your confusion:

1) the integral $\oint_C q(\mathbf v\times \mathbf B)\cdot d\mathbf s = vBl$ along the circuit $C$ is not $work$ of magnetic force; it is called electromotive force of the circuit (emf). This is because $\mathbf v$ in this expression is not the velocity of the charged particle, but that of the element of conductor. The charged particle moves in a more complicated way.

2) if magnetic force does not work on the charges, then why there is current and evolution of heat in the conductor in the first place?

In macroscopic theory, the description of such situations where current is due to nonelectrostatic force (such as current in the battery, or due to thermal gradients, or due to magnetic field, as in the rod) is via general notion of electromotive intensity $\mathbf E^*$. This is not electric field, but has the same units and its meaning is that the total force acting on the macroscopic charge is

One can derive approximate condition for $\mathbf E^*$ for the case of perfect conductor; the total force acting on the charge has to be zero and

Various circumstances lead to various expressions for $\mathbf E^*$ in terms of other measurable quantities, for example in the Seebeck effect $\mathbf E^* = -k \nabla T$. In the case of magnetic forces, experiments are well explained by assuming that

$$ \mathbf E^* = \mathbf v \times \mathbf B, $$ but explaining why this works from the point of view of observer in the laboratory frame seems hard. It would require going into some microscopic theory of conduction and taking into account both the velocity of the rod $\mathbf v$ and the velocities of the individual charge carriers $\mathbf u_i$.

If you could cite the reference more completely, it would have been much clearer. However, as far as I understood, there is only one Lorentz force which is $ F = q(E+\bar vX\bar B)$. The heating/work that you are referring to is called Joule heating and is caused by the motion of electrons in the wire.

Joule heating is caused by interactions between the moving particles that form the current (usually, but not always, electrons) and the atomic ions that make up the body of the conductor. Charged particles in an electric circuit are accelerated by an electric field but give up some of their kinetic energy each time they collide with an ion. The increase in the kinetic or vibrational energy of the ions manifests itself as heat and a rise in the temperature of the conductor. Hence energy is transferred from the electrical power supply to the conductor and any materials with which it is in thermal contact.

We will follow the life of an electron, we can call it El.

So, our conduction electron El is happily moving on the top wire, to the right. It's guided by electrostatic forces in the sense that when it bumps into something that slows it down, the conductions electrons in front keep going (so postiive charge imbalance there, attracting it) and the electrons behind it keep building up (negative charge imbalance there, pushing it forward). Same if something pushes it extra. It's like traffic, there are consequences for stepping out of line, in this case electrostatic consequences.

OK, so this electron El will go into the wire on the right for the same reason, electrostatically the electrons in front of El went that way, so there is an opening (will be a charge imbalance), but turning that corner all those protons are moving at speed v to the right. So even though there isn't an earlier electron to "follow" there is a charge imbalance there, so electrostatically it gets pulled that way, and will continue until it also is moving at speed v to the right. But now something new is happening.

Now El has a velocity to the right, and so can experience an magnetic force downwards, and the electrons in front there are experiencing the same kinds of forces, so everyone can have some force per unit charge in the direction of the circuit element. We can measure this, and it's called EMF. So the conduction electron gets an EMF because of the rightwards component of the velocity.

This is not work because force is orthogonal to the motion (a more precise analysis would note that the average velocity of the particle needs to get it from the top at one time to a point below it ... and to the right since by the time it gets to the bottom the wire is farther to the right, but there will still be no work in this more careful analysis, and it's only the part of v orthogonal to the circuit element and the magnetic field that contributes to the EMF, so it's not an entire fraud. An even more careful analysis would have a sea of random velocities with a net bias for a drift velocity, but again it's the average velocity that contributes a net effect, and again only the rightwards component of the velocity that matters to the EMF).

Basically, you have neutral wire and a pretty steady current (not changing fast relative to the speed of light) so magnetic forces do push the charges around, but always orthogonal to the velocity of any fixed charge and small charge imbalances counteract any deviation from the steady flow of charge.

Not the answer you're looking for? Browse other questions tagged electromagnetism work induction or ask your own question.