How to sail downwind faster than the wind?

Recently a group set a record for sailing a wind-powered land vehicle directly down wind, and a speed faster than wind speed. Wikipedia has a page talking about it, but it doesn't explain exactly how it works.

Could someone help explain how this is possible?

forces classical-mechanics aerodynamics
Share
Improve this question
edited May 25 '12 at 18:34

It does sound counterintuitive. The actual device used gears attached to a wind turbine. Even though the turbine was moving faster than the wind, the thrust (IIRC) was such as to slow down the wind field. So energy was being extracted from the wind field to turn wheels via the right gear ratio. In any case energy is removed from the wind field so no laws of physics were violated. Traveling at angles to the wind is easier to visualize. In fact wind turbine blades travel at right angles to the wind at multiples of the wind speed. But that is different. This was a really clever device, and unless shown how it works (I don't remember the details) most physicists think "no way". I suspect it might have to be pushed to faster than wind speed to get it going. Without wheels attached to the solid ground it wouldn't work, its basically increasing the wind field coupling to the solid earth.

This has also been explained in terms of a wheel on a treadmill, if you consider the air to be relatively thick and rigid. 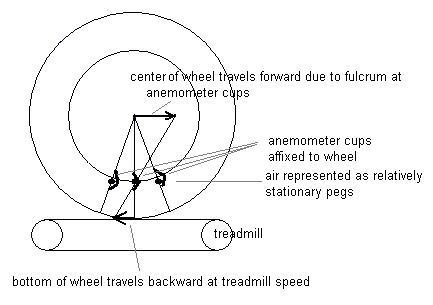 Of course, in order to make this work with real air, some of the air will be pushed backward, and since the top of the wheel is traveling forward at a relatively high velocity, air resistance has to be minimized by streamlining, etc. That's why these things don't work if they are casually made.

But basically it's a simple matter of leverage, and exploiting the difference in velocity between the surface and the air.

AND Yet another explanation. Think of the wind as something that pushes, and think of the surface of the propeller as a sliding wedge. 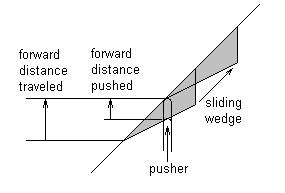 As the wind pushes that surface forward a certain distance, the wedge itself travels forward a greater distance.

AND yet another explanation, seeking a super-simple intuitive image of what's going on. Here's a catamaran on a broad reach:

What makes it go is the squeezing effect between the water and the wind on the triangle consisting of the keel and the sail. There is no limit on the speed of travel. The narrower the triangle is, the faster it can go, limited only by drag. Also, the direction of travel need not be at right angles to the wind, as long as there are components of the wind's force and the water's force acting to squeeze the wedge.

Now suppose the water surface is actually a cylinder oriented downwind, and the boat sails around and around it. Then the sail looks more like a fan blade (like on the blackbird car) but it works the same.

Here is the simplest explanation I can think of.

Indeed the propeller doesn't work like a windmill powering the wheels, but like a fan powered by the wheels. 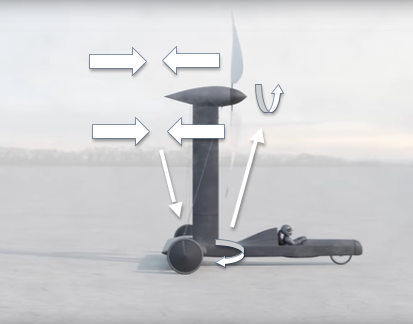 What the diagram shows:

If there were no wind, assuming 100% efficiency, the energy required to push the car would indeed equal the energy that can be captured from the wheels. That would be a perpetuum mobile. But since the wind provides part of the energy that pushes the car, you need less energy from the propeller.

The effect represented by the wind arrows actually happens at the surface of the propeller blades. The propeller pushes back against the air which is already moving forward because of the wind. Imagine these 2 arrows like a spring that is compressed by both sides and results in a force on the propeller.

Credits: The image is from a video by Veritasium.
https://www.youtube.com/watch?v=yCsgoLc_fzI.
The arrows were added by me.

This came up recently on the Skeptics stack exchange.

I was intrigued, so I puzzled over it until I think I understood how it worked, and put the explanation here.

I was a little enthusiastic and got clobbered there for insufficient references. C'est la vie. Even so, it's a nifty counterintuitive technique.

EDIT: Here's another little diagram that illustrates the geometry. 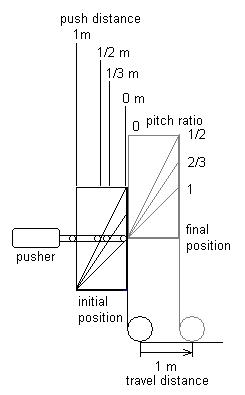 At the bottom is a wheel in contact with the ground, and it is linked by a chain or something to a surface that is being pushed against by a pusher, representing the wind. The initial position is shown in black, and the final position is shown in gray. The surface being pushed against has an angle, or pitch ratio, which ranges from 0 for absolutely vertical, to 1 for 45 degrees. As the vehicle moves forward 1 distance unit, the pushing surface rises vertically 1 unit, so it is following a 45 degree path up and to the right. Depending on the pitch of the pushing surface, the pusher moves forward anywhere from 1 unit to 0 units. So the pitch ratio determines the speed ratio between the wheels and the pusher, just as if it were a transmission.

So, for instance, if the pitch ratio were 2/3, the ratio of wheels-to-pusher distance travelled would be 3. Of course, to get higher speed ratios depends on things like friction, efficiency, etc. 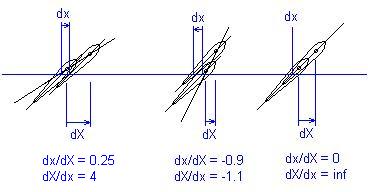 There is an airfoil which is following a helical path because it is geared to the wheels. It has a pitch angle, and thus an angle of attack with respect to the helical path. In a given dt of time, the airfoil travels a distance dX in the X direction. In that same amount of time a parcel of air is deflected a distance dx in the X direction. There is a ratio dx/dX and its inverse dX/dx. Thus the angle of attack determines whether the wind drives the vehicle forward or backward, at any "gear ratio", or not at all.

The wheels use regenerative braking drive a propeller/turbine to provide thrust not the other way around.

In a typical sailboat or other wind powered craft the wind provides thrust and the resistance given by the conveying mechanism (water or wheels) is typically minimized.

In this scenario however, the wheels have a little bit of regenerative braking applied to them and the power collected is used to power what is effectively a rearward facing fan.

Without powering the fan the speed of the vehicle would top out just a little below the speed of the wind, when the thrust from the stationary propeller equaled the drag on the wheels. Adding the regenerative braking would increase the braking force, but this is more than made up for by the increase in thrust from the propeller. Through gearing we can apply whatever ratios we want but we have to expend less power than we generate.

Propellers are complicated, but as a first (very bad) approximation we could use the same formula

But here we have to use the velocity of the propeller relative to the wind:

Since the wind is blowing forward we'll use less power than we generate if we apply enough thrust to balance the braking force, which means we'll have extra power to apply more thrust and accelerate.

Better approximation of the thrust-power-windspeed relationship to come...

The wheel with aerodynamic cups makes some sense; the car with the driving fan does not. If the concept of wheels driving a fan actually worked, it could go forever in still air after a push start!

I think the explanations are exceedingly complicated: they want to cover the dynamics of interaction with wind. Below, I restate the question so that the particular geometry of the propeller does not matter — while the main mind-blocks still remain the same. (I think it is much easier to fight these mind blocks on an easier example…)

Step 1: consider a cable car. There is a cable moving forward below the car. Grabbing this cable one can make the car to move forward. (So we replace wind by a cable here.)

Step 2: consider a 3-wheeled bike instead of a cable car, with the front (=center) wheel on a conveyor belt, and two back wheels outside the belt. Now imaging the belt moving forward 10 km/h. We “want” to move forward quicker than the belt.

As far as all wheels are free-wheeling, the bike can move back or forth with an arbitrary speed (subject to friction). However, when the front wheel gets stuck, the bike is forced to move forward, at speed 10 km/h (less due to friction).

(Due to friction, the actual speed may be a bit less.)

The reason is in the mechanism of the force that drives the sailboat. The mechanism is not the pressure that the wind excerpts on the sail, but the lift that is created by the wind flow around the sail. So it is the Bernoulli principle that is powering the sailboats.

edit: Sorry, I didn't notice that you said downwind...

Not the answer you're looking for? Browse other questions tagged forces classical-mechanics aerodynamics or ask your own question.

16
Why is a beam reach the fastest point of sail on modern sailboats?
1
how could more rotor speed mean less energy in wind turbine?
6
Generating lift by Naruto running
0
Details about mechanics of directly-downwind-faster-than-wind vehicle
16
Can a Styrofoam box bounce back into a moving van?
1
How does down-wind faster than the wind (over-land) really work?
1
Is a passive vehicle exceeding wind speed from rest possible with momentum conservation?