About Poincare section for the double pendulum

I am reading Prof. Louis N. Hand's Analytical Mechanics. In the chapter about chaos, it introduces the concepts of Poincare section based on the example of double pendulum. Also, it plot the section when the initial angles for the upper and lower pendulum is small (about 1 degree for each). So in this case, the section contains some closed curves. I have few questions about the section.

Following the post found in https://mathematica.stackexchange.com/q/40122/, I have the code modified such that 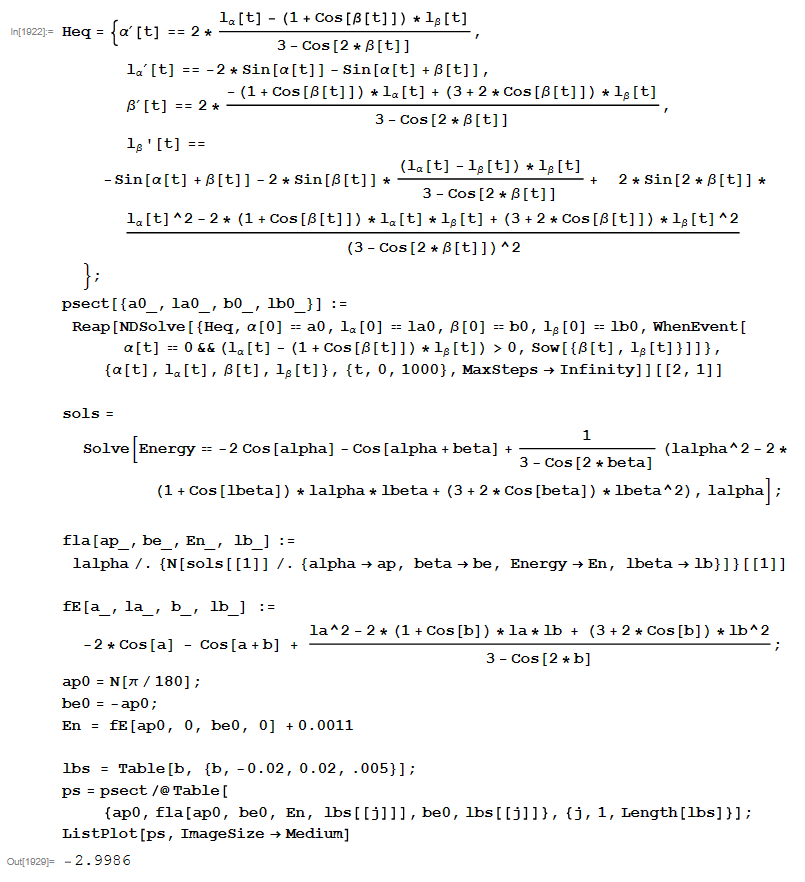 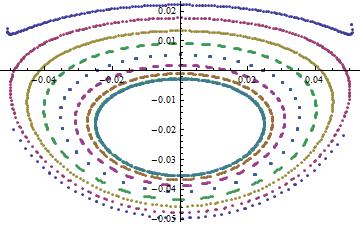 First. Yes, it is possible for the curves in Poincare section to cross. (I am assuming you mean generally). Remember, that Poincare section is a 2D projection of a 3D section of a 4D phase space. Regular, non-chaotic dynamics correspond to the winding of a $T_2$ torus embedded in this 4D space. Sections of such torus could be the couple of closed curves in the 3D hyperplane. Projecting this hyperplane on the 2D space could produce intersections. Additionally, Poincare section may include only points with a given directions of a hypersurface crossing, then the number of resulting curves would be reduced. Probably even then there still is a possibility for the intersecting curves in the Poincare section, although those would require highly nonlinear regimes (possibly after at least one bifurcation).

Second. Why would you expect the symmetry with respect to sign of the momentum? The Hamiltonian for the double pendulum contains the term proportional to the product of both momenta $l_\alpha l_\beta$. Therefore Hamiltonian and the torus in the 4D phase space are invariant only with respect to change of signs of both momenta, but not with respect to a change of sign of a single momentum. After making cross-section and projecting it onto 2D plane, no mirror symmetry w.r.t. momentum sign is to be expected in the resulting Poincare section.

Addition Upon discussion in the comments, I understand that the one unresolved issue is the set of initial data which generates the figure from the book. In the book the figure is accompanied by the comment:

So, all those curves correspond to different sections arising from varied ICs with the fixed energy $E_0$. Here is my attempt at reproducing the figure: 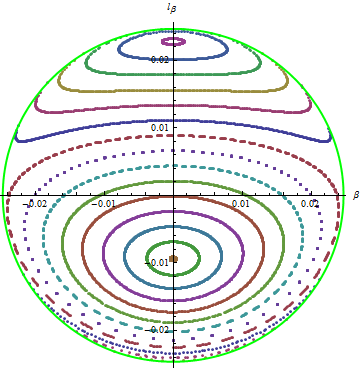 Various colors correspond to an individual Poincare section defined by its own initial point. The point are chosen so that: $$ \alpha=0, \quad \beta=0, \quad \dot{\alpha}>0, \quad H(0,l_\alpha,0,l_\beta)=E_0. $$ The value of $l_\beta$ is chosen so that curves are evenly spaced between two limiting points corresponding to normal modes of oscillation. The last two conditions and known $l_\beta$ allow us to unambiguously calculate $l_\alpha$.

The code for the picture is based on the linked question from Mathematica SE and can be seen here.

Not the answer you're looking for? Browse other questions tagged newtonian-mechanics chaos-theory complex-systems or ask your own question.