The famous drop of $c$

In this (in my opinion) intriguing speech, Rupert Sheldrake tells the story of the drop in the measured value of $c$ between 1928 and 1945. When he goes to visit the Head of Metrology of the Physics Lab in Teddington, he says (I summarize):

$c$ cannot change, it is a constant! We explain the drop you are talking about with "intellectual phase locking". Anyway, we have now solved the problem. We fixed the speed of light by definition in 1972. It might still change, but since we define the meter from $c$, we would never know.

Is that true? If $c$ changed, would we be able to see it? And how does science explain the famous drop in the measured value of $c$? 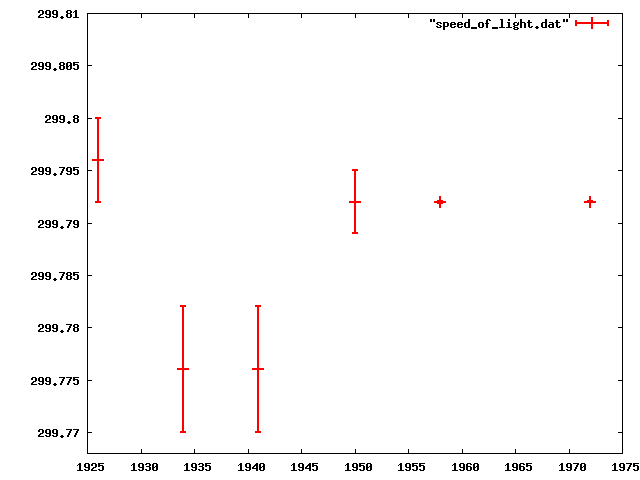 (based on data from Wikipedia and Henrion & Fischhoff 1986 (NB: PDF)). The relevant section of Henrion & Feschhoff reads,

A related measure [to the chi-squared statistic], the Birge ratio, $R_B$, assesses the compatibility of a set of measurements by comparing the variability among experiments to the reported uncertainties. It may be defined as the standard deviation of the normalized residuals:$$R_B^2=\sum_ih_i^2/(N-1)$$ Alternatively, the Birge ratio may be seen as a measure of the appropriateness of the reported uncertainties...If $R_B$ is much greater than one, then one or more of the experiments has underestimated its uncertainty and may contain unrecognized systematic errors...If $R_B$ is much less than one, then either the uncertainties have, in the aggregate, been overestimated or the errors are correlated.

According to Henrion & Fischhoff, the Birge ratio in the range 1875-1941 was 1.47 while the range 1947-1958 had a ratio of 1.32; the combined ranges give $R_B= 1.42$. This means that pretty much all the data taken prior to the 1960's was not accounting for error correctly. Since then, we have improved (a) our experiments to reduce the errors and (b) our ability to correctly account for errors.

We fixed the speed of light by definition in 1972.

"For us time [or rather, duration] is the only basic measure. Length (or distance [or, indeed, quasi-distances]), in so far as it is necessary or desirable to introduce it, is strictly a derived concept, and will be dealt with later in that spirit. "

He [the speed of light (in vacuum)] might still change,

That appears doubtful. As long as reference is made to the same definition of "ligth (in vacuum)", and as long as "length" is strictly understood as a derived measure (with the same derivation or definition used consistently), the notion "speed of light (in vacuum)" plainly remains unchanged.

And how does official science explains really the famous drop in the measures of c?

My own assessment (which is hereby public and open for comments/responses):
It appears doubtful that people who claim to have "measured the speed of light (in vacuum)", (rather than, for instance, having measured distances between different identifiable parts of experimental equipment, or whether they were at rest to each other in the first place; or having measured the index of refraction in a particular experimental region) were able to assign any finite range of systematic uncertainty (or confidence intervals) to their reported results at all. Thus any possible such "drop" appears insignificant; and one may not strictly speak of such reports as "measures of c" in the first place.

Not the answer you're looking for? Browse other questions tagged speed-of-light history physical-constants metrology or ask your own question.

41
What is the proof that the universal constants ($G$, $\hbar$, $\ldots$) are really constant in time and space?
15
Has the speed of light changed over time?
3
The vacuum light speed: Is it really constant, i.e., independent of location in space-time?
1
Speed of light in vacuum - is it really a constant and what is the accurate value?
0
Big bang red shift verification
0
Examples of a measurement slowly converging on the correct result after an initial eronious experiment?