Why doesn't an electron feel an electric field, and thus accelerate whilst inside the drift tube of a linear accelerator?

Why is the resultant field strength inside the tubes of a linear particle accelerator zero (i.e. the particles move in constant velocity through the tube)? 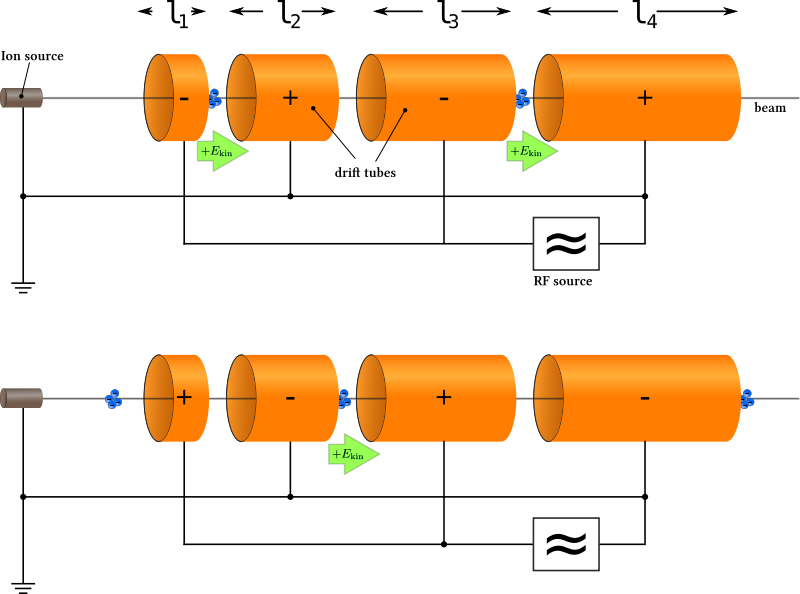 As in the diagram, the particle accelerates between the space of first tube (l1) and second tube (l2), but no acceleration within the tube. The particle moves with constant speed in the tube. But, why?

I read a few pages, some texts refer to electric screening. But I am confused about that.

OK, so the questions is "Why are there parts of the linac which are not used for accelerating the particles?".

That is a good question and may not be obvious.

The diagrams in the question show an early stage of the accelerator. At this point the particles are still non-relativistic or only slightly relativistic which means that the speed of the particle changes as it gets more energy.

Couple that with the fact that the accelerating potential is provided by a single radio-frequency signal and the accelerating regions have to be a further apart as the particles move down the tube (because they are going faster, but the time to switch polarity of the signal is a constant set by the frequency of the RF).

If you were accelerating a single particle, then in principle each drift tube could be a thin collar of conductor, but because you are managing a "bunch" that may be spread out along the axis of the beam those outliers could be in either the next or previous cell where the field is reversed relative the desired direction. To prevent that the drift tubes are engineered to arrange a low field region between each accelerating region and ensure that the entire bunch gets a push in the right direction. (In fact, it is possible and desirable to arrange for the leaders to get a little less push and the laggards to get a little more so that the bunches get tighter as you go along.)

A "beam" in a typical accelerator is not uniform, but consists of a bunch a "bunches" and moves in a high-quality, laboratory vacuum. So, what is a bunch? It is a number of charged particles (whatever makes up the beam) close to one another. These particles are subject to the Coulomb force and they try to move away from one another. If that happens the beam will grow ever larger and eventually crash into the walls of the beam tube.

To prevent that the beam has to be passed though quadrupole magnets from time to time. These take up space on the beamline (and it is much easier and cheaper to have separate magnets and cavities than to try to engineer them into a single unit).

The beam also needs to be steered to keep it on course and may need to be turned (because even "linear" accelerators have bends in places). This requires dipole magnets. Again these are separate from the cavities, though in some cases people do build combined dipole and quadrupole magnets; the Fermilab logo is a diagram on the field lines in such a "hexapole".

You also need to instrument the beam for current, beams size, halo, position and so on. All of those instruments take up space along the beam line.

So the short answer is "We use all the beam line that is available."

Why the beam moves at constant speed when not being accelerated is just Newton's first law.

The reason the bunches are spaced so that they exist in every-other acceleration region (called cavities) is because the acceleration is provided by a radio-frequency signal. Every other cavity has it's field pointing the wrong way (i.e. to decelerate the beam).

I'm not sure whether I understood the OP. The question I am answering is, why doesn't an electron feel an electric field and thus accelerate whilst inside the drift tube of a linear accelerator?

$$ \oint \vec E \cdot \rm d \vec A = Q/\epsilon_0 =0, $$ because the charge enclosed, $Q$, by a closed surface in the cylinder is zero. As there is no electric field inside the drift tube, an electron is not accelerated.

In reality, the drift tubes are not isolated from each other, and thus contain small electric fields.

For an explanation of Gauss' law, read e.g. wiki.

I'll go down to some "why levels", I hope that one of those hits yours.

Inside the tube there is no accelerating field because the hole of the tube is small with respect to the field wavelength and so it cannot enter (otherwise it would act as a waveguide!).

The tubes are there to screen most of the sine shaped voltage so that when a particle comes out from a tube, the electric field is always around its maximum. In particular we want to screen the decelerating phase, but also some of the accelerating so that we have a flatter field (both in time and space) and even the particles a bit ahead or behind see almost the same voltage.

To better fix the ideas it's nice to look at a real picture like this one of a structure of Linac 4 at CERN. 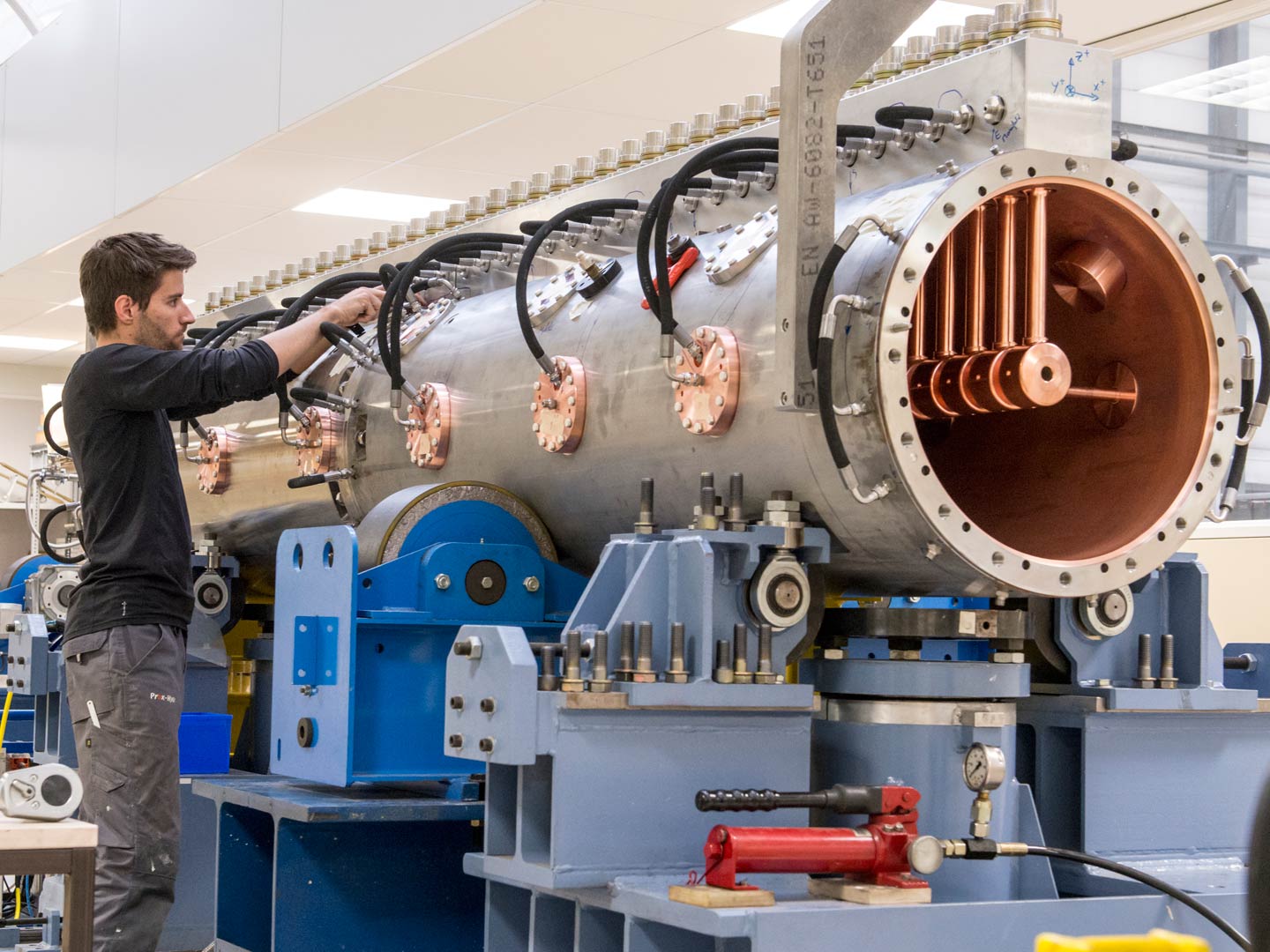 The tubes here look more like donuts, they are suspended in the centre of the tank. The beam ($H^-$) goes though the hollow hole in the centre. The tank allows to have vacuum and also contains the Radio Frequency (RF) field. The RF frequency is $\sim350~$MHz and the speed of particles is $\sim0.1~c$, this means that the particles see about $40^\circ$ of the RF period (hopefully centred on the maximum!) going through a typical gap of $1~$cm between the tubes. Last observation: the tubes looks so fatty because there are (permanent) (quadrupolar) magnets inside of them to keep the beam focussed as it goes through such a small hole.

Not the answer you're looking for? Browse other questions tagged accelerator-physics or ask your own question.

17
Relativistic centripetal force
3
Question about linacs
21
Why doesn't the LHC accelerate electrons?
1
LinAc standing wave
0
How the relativistic mass gain prob is overcome in synchrotron by adjusting the frequency of electric field to accelerate particles to high KE?
1
Do particle accelerators have to adjust for the sun's gravity due to length contraction?