Do gravitational lenses have a focus point?

Do gravitational lenses have a focus point? Could I burn space ants?

It's pretty easy to see that the gravitational lens doesn't have a focal point. Please excuse my very poor drawing: 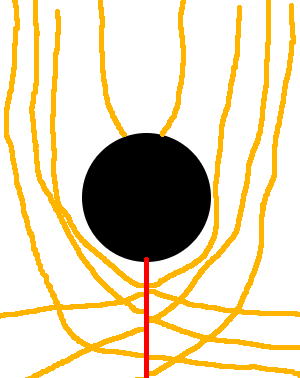 Rays from the top are focused across a line. A black hole would have a "focus line" but not a focus point.

Ordinary optical lenses deflect the light ray, at least in a linear polarization, by an angle that is linear as a function of the location $(x,y)$ on the lens: $$\theta \sim ax + by$$ Well, we should really talk about $\vec k$, the wave vector, a two-dimensional angle of a sort.

On the other hand, the deflection by the gravitational lens goes like an inverse power law $$ |\theta| \sim \frac{1}{r^n} $$ for some positive $n$, just like a gravitational force. The convergence requires the linear dependence from the first formula; the second formula doesn't imitate it in any approximation.

Thinking simply about a point source such as a black hole, the equivalent optical lens created by such an object looks like the image below (taken from this article). That is to say it falls off as $\frac{1}{r}$ as pointed out by Lubos Motl in his answer.

This object has some interesting optical properties. The $\frac{1}{r}$ potential will act as a diverging optical lens for objects far from the axis. This is why gravitational lenses can be used to magnify distant objects. I.E. you wouldn't be able to burn the space ants, but you could use it to see them more clearly.

The discontinuity at the center of the lens will make it act like an optical object known as an axicon which, as is pointed out both in the linked wikipedia article and by Brandon in his answer, will image a point source to a line along the optical axis. 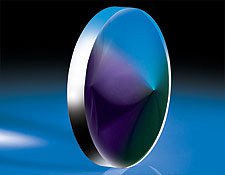 There is a good paper on the properties of axicon's here at Optics InfoBase. One of the most interesting properties is that it can turn an image inside out; imaging points near the optical axis further from the axis than those that started further away. This property is what allows gravitational lenses to form multiple images of the same object in a ring-like pattern such as in the below image.

Not the answer you're looking for? Browse other questions tagged optics gravitational-lensing or ask your own question.