How to freeze the Niagara waterfalls?

Here is a picture of the usual vigorous Niagara Falls (in the winter). 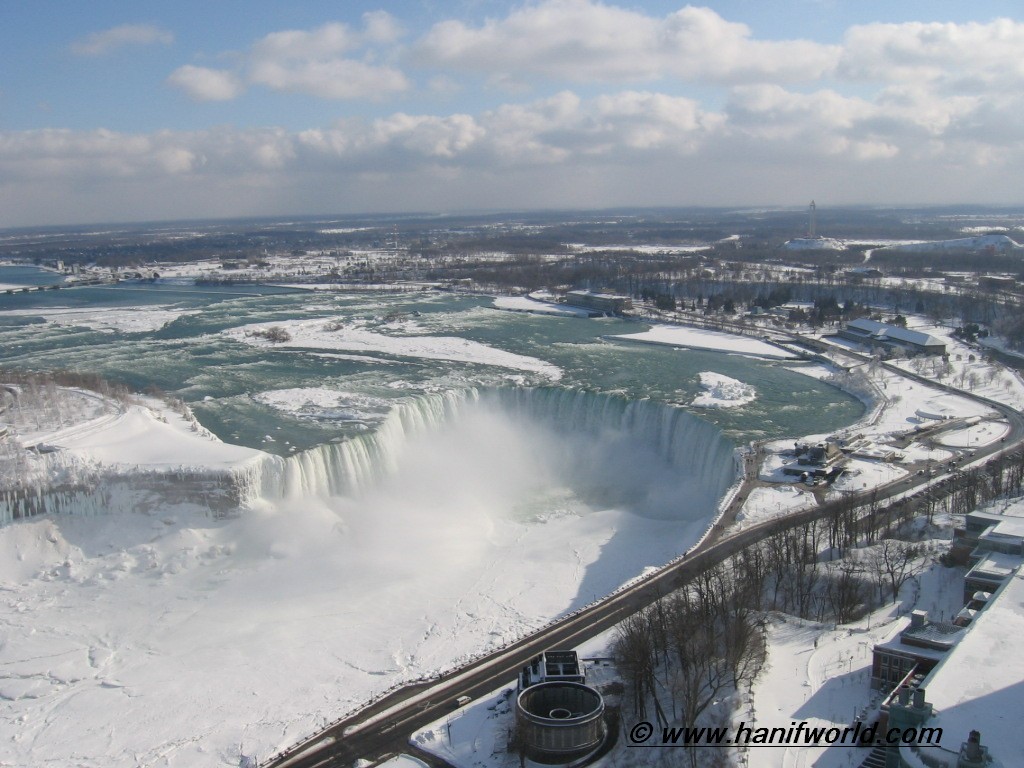 Here is the picture of Niagara Falls frozen in 1933 (in the very cold winter). 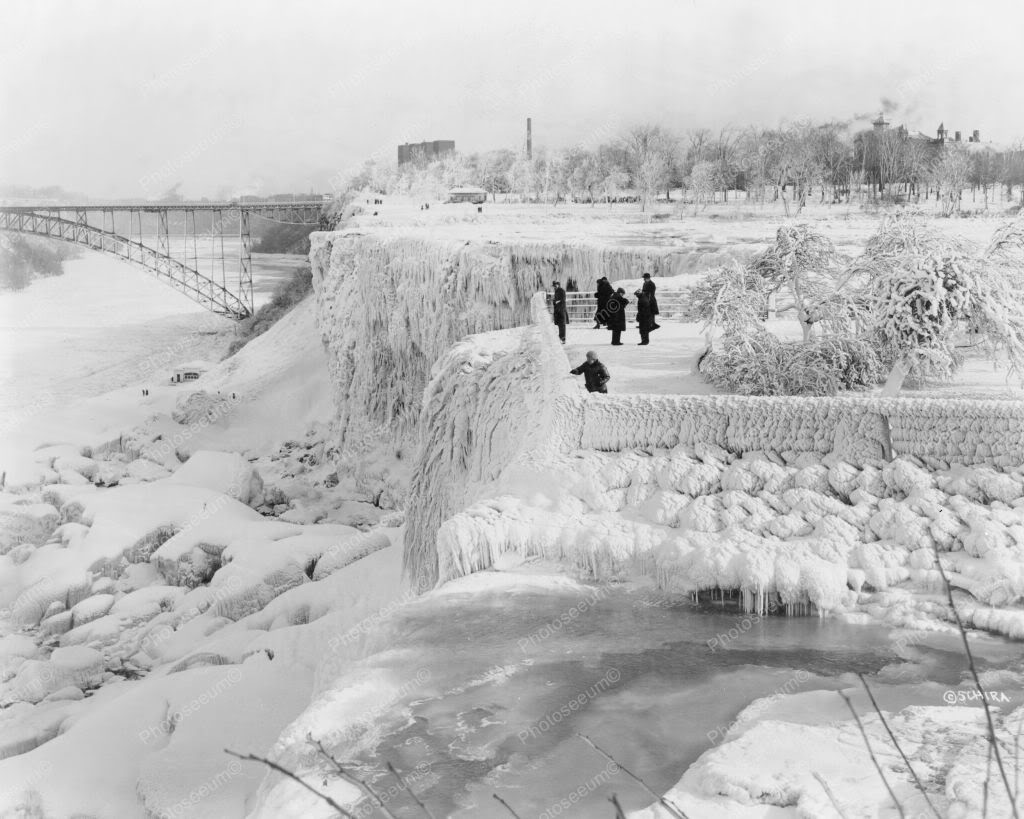 Here is the picture of Niagara Falls frozen in 1911 (in the extremely cold winter). 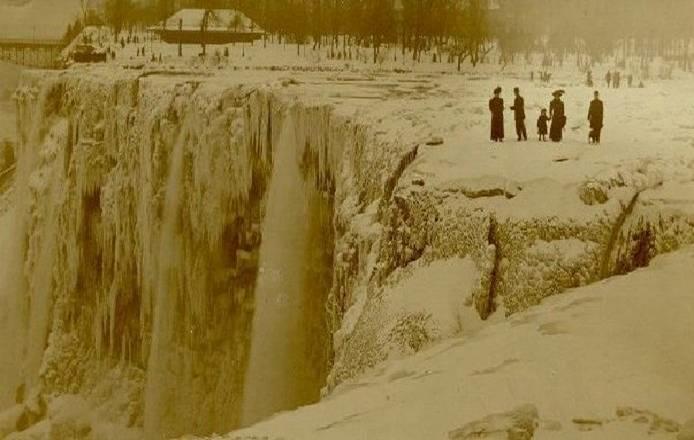 $\bullet$ I am curious to know under what conditions of the air pressure(atm), temperature, solute density in the water would cause the Niagara fall frozen?

Are other conditions like: winds, snowing or not, the strength of Van der Waals force, the moving speed/velocity of water and the pulling force of gravity (acceleration $g$), the height $H$ of waterfalls would be some important factors to predict the conditions to freeze the waterfalls?

Is there some simple qualitative relations or quantitative formulas describing the freezing point for waterfall? A $P$(pressure),$T$(temperature), etc, $\dots$ curve for the water-ice phase transition on the phase diagram? Perhaps the answer is very simple(?), but it is not entirely trivial to me.

ps. Happy winter/holiday times for those who reading the post, and especially those residing on the cold side of the north-hemisphere. Thanks for comments/replies!

I am curious to know under what conditions of the air pressure(atm), temperature, solute density in the water would cause the Niagara fall frozen?

In general, the answer is "a bit lower than 32 Fahrenheit". Here's two things which one might think would come into play, but actually do not to an appreciable extend.

The major solutes which are present in the Great Lakes are sodium, chloride, and a host of other ions in lesser amounts. According to the government website here, the typical sodium concentration found in the Great Lakes is on the order of 10 mg/L. This is well within the regime of ideal solution behavior, and so we get a freezing point depression of $\Delta T\approx k_fbi=0.0016$ Kelvin (assuming NaCl). This is tiny compared to seasonal temperature variations, so solute concentration can be mostly ignored.

This obviously leaves out a lot of kinetic and rate information. For example, dissipative heating at the foot of the waterfall will heat up the water there by approximately $$\Delta T=\frac{mgh}{C_p}=0.12\mbox{K}$$ which easily swamps the contribution due to air pressure and solute concentration. This also ignores nucleation effects, and it ignores the rates of coolings from evaporative cooling and air cooling, so it says nothing about how long one would have to wait for the entire waterfall to freeze in so-and-so temperature. However, I think it's safe to say that the temperature needs to be a good bit lower than 32F for the falls to freeze. It may also be worthwhile to look through historical archives and see what the mean temperature was in the years for the photographs you posted.

I'm not quite sure what you mean by Van der Waals force, as that's pretty much going to be constant within a given substance.

consider the conditions of nearly completely frozen falls: which means there are water branches from the very top of the falls are frozen connected to the bottom of the falls.

The picture you shown suggests the stuffs connecting from top of waterfall to the bottom is icicle, which can only be formed with not so fast flowing of water, otherwise high speed water flow can melt the icicle.

Is there some simple qualitative relations or quantitative formulas describing the freezing point for waterfall?

The first thing to know is that waterfalls are not a static system, so it cannot be specified solely by thermaldynamic variables $P$, $V$, $T$. Also, the temperature of air can be different from the temperature of river. Since water is flowing under gravity, it is hard to be freezed since the gravitation energy is kept converting to heat due to friction and viscosity (otherwise, the water would flow faster and faster, which is not the case). Moreover, when the temperature is cold enough, ice is formed on top of the river. Ice is not good conductor so that it takes even longer time for the river to freeze completely. It is similar to the "frozen" lake that often have thick layer of ice on top and water under it. In such cases, the temperature of water is usually close to or a bit higher than $0^oC$, which is higher than the atmospheric temperature.

It means that there is no simple single condition of "frozen" waterfall. It also depends on the shape of river, and "external" factor other than the river itself. Instead, it can be achieved with many different conditions.

That siad, the most important factor should be a slow flow of water. The width and depth of the river is a important factor. Also, the circumference of waterfall. Since we are consider how long does it take for icicle to connect to the bottom, the height of the waterfall is also a factor. The most important thing should be that there is long enough time of no rain fall and cold weather to freeze the source part of river so the water volume is low. With combination of these, we should be able to see the waterfall being frozen after a long time.

consider the conditions of nearly completely frozen falls: which means there are water branches from the very top of the falls are frozen connected to the bottom of the falls.

Not the answer you're looking for? Browse other questions tagged thermodynamics fluid-dynamics phase-transition phase-diagram water or ask your own question.

4
Why does freshwater freeze from top to bottom?

8
How cold does it need to be for spit to freeze before hitting the ground?
3
How can we describe or model the spread of ice during the freezing of the surface of a still lake?
27
Freeze water in red-hot container
1
Why do we heat salt water to desalinate it rather than freeze it?
41
Why do small patches of snow remain on the ground many days or weeks after all the other snow has melted?
19
Freezing water: in layers or all at once?
2
Froze or freeze bottle Exploding
1
Frozen dew explanation
34
How does a river freeze when the water keeps moving?