Can we explain Huygens' principle taking into account Maxwell's predictions?

Descartes gave the corpuscular model (1637) of light. Corpuscular model was further developed by Issac Newton. Model predicted that if the ray light (on refraction) bends towards the normal then the speed of light would be greater in the second medium. Foucault proved it to be false in 1850. Before this, Huygens had put forward the wave theory of light in 1678, this was not readily accepted primarily because of Newton's authority and also because light could travel through vacuinum and it was felt that a wave would always require a medium to propagate from one point to the other. However, when Thomas Young performed his famous interference experiment in 1801 (click here to watch the video), it was firmly established that light is indeed a wave phenomenon.

Huygens explained the interference pattern by considering light to behave as like waves (similar to water waves). It ruled out the corpuscular theory of light as it could not account for the pattern formed. Now, we can assume light to be some what like water waves (strictly speaking at present, it is believed that, light propagates with electric and magnetic field oscillating perpendicular to each other).

So, considering that oscillating charge produces electromagnetic radiation. I thought in Sun, vibration or acceleration of charges or ions produces light or electromagnetic radiation. Or else we can say that excited atom emits light. In sun there are infinite number of atoms which emit radiations, and we can't expect all the waves to be in phase as like in water waves (even if we use any monochromatic light source I thought we can expect billions of atoms to be emitting light which may not be in phase). So, I thought considering electromagnetic waves or light to be similar in model to that of water waves over rules from this view of Maxwell's theory. But, Huygen successfully explained that waves will be in phase, and there will be wavefronts as like in water waves. I don't know whether I have misunderstood anywhere, or else is it that we can't explain Huygen's principle taking into account Maxwell's prediction? If any is the case please explain. 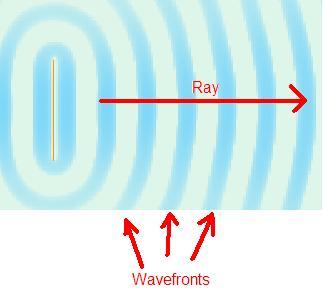 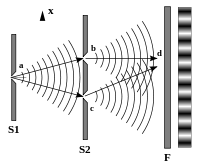 [Huygens model, where he considers light waves to be in phase]

It is far from clear to me what you questions is. The only though I had is that you are interpreting "It is an important result of Maxwell's theory that accelerated charges radiate electromagnetic waves" as being exclusive and wondering where the accelerated charges are in the slits.

However, Maxwells equations (and it is important to think in terms of the equations and not some vague and foggy word picture) make it quite clear that fields with a non-zero second derivative are sources of electromagnetic radiation. In short, Maxwell's equations explain Huygen's principle directly with no further work required.

I think the point is that the Huygens-Fresnel principle only tells you how the light gets from one point to the next, and not how it is produced in the first place (the source). The wave equation $$\frac{\partial^2}{\partial t^2} \mathbf{E} - c^2 \boldsymbol\nabla ^2 \mathbf{E} = 0$$ says that whenever the electric field varies non-linearly in space, i.e., $\boldsymbol\nabla^2\mathbf{E}\neq 0$, it will begin to change in order to counteract that variation. Huygens' principle says that if you know how to solve the wave equation for a momentary point-like flash of light (a blip, if you will), then you can solve the wave equation for more complicated waves by treating every part of the wave as a momentary point-like flash.

It might be worth your while to learn how to solve the wave equation (or other Cauchy problems) using Green's functions. This is done in most texts on mathematical physics.

To add to Dmckee's answer.

A good reference for all of this is Chapter 8 of Born and Wolf, "Principles of Optics" and the line of reasoning essentially goes as follows:

All of the Cartesian components of the time harmonic electromagnetic field $\vec{E}, \vec{B}\,\cdots$ (and the components of the potential four-vector, which is naturally in Lorenz gauge) in a homogeneous medium fulfill the Helmholtz equation:

where $k$ is the wavenumber of the monochromatic field in the medium in question.

Now the Greens function for this equation (i.e. the basic solution to the inhomogeneous equation $(\nabla^2 + k^2)\psi = \delta(\vec{r})$ where $\delta$ is taken in the distributional sense) is $\exp(i\,k,r)/r$. This is the "Huygens propagator"; we build solutions of the homogeneous Helmholtz equation up from this basic solution radiation from "sources" outside the space of interest; that this can be done by putting a continuous sheet of such sources on a "source" aperture in the spirit of Huygens is shown in Chapter 8 of Born and Wolf to come up with Kirchoff's diffraction integral which expresses the a homogeneous-Helmholtz-equation-fulfilling field $\psi$ at any point inside a volume $V$ in terms of its values and normal derivatives on the boundary $\partial V$:

After bashing this expression a little and making some fairly mild assumptions, Huygens's original theory can be derived.

One thing which we should be clear is that we should first think what theory is for what purpose. As a lay man I find that:

So, the question seems to be a vague (unclear character).

Not the answer you're looking for? Browse other questions tagged waves electromagnetic-radiation interference superposition huygens-principle or ask your own question.

43
How are classical optics phenomena explained in QED (Snell's law)?
9
How is the path integral for light explained, or how does it arise?
7
How can the Huygens-Fresnel principle be derived from the Maxwell equations?
5
What restrictions on time boundary conditions does it have to use Fourier transform to solve wave equation?