What is the direction of static friction?

Note: My question is duplicate of the following

Question: Is the force of static friction is always opposite to the applied force ? If not then what determines its direction?

There are two cases possible:

1)It orients itself in direction and magnitude in such a way that the relative acceleration of the contact point is zero.

2)If this is not possible(such as in friction is too small to prevent motion),it tries to minimize the relative acceleration. 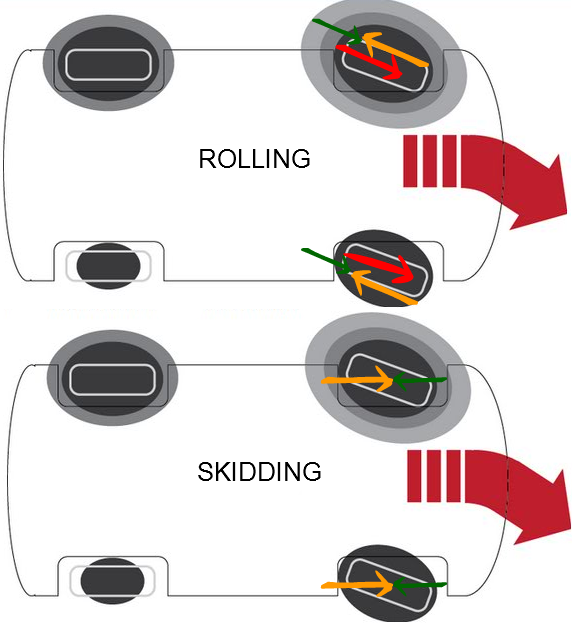 Red: Direction of motion of the top of the wheel relative to road

Orange: Direction of motion of the bottom of the wheel relative to road

Green: Direction of force of friction acting on the wheel

If the wheels are still rolling: friction at the ground/wheel interface simply opposes the rolling of the wheel, slowing it down. In the reference frame of the chassis, this friction has both x & y components for any nonzero angle of steer, and also acts on the chassis because the wheel is connected to it by axle (thereby allowing the car to simultaneously advance and turn).

If the wheels are locked due to braking, then it doesn't matter what their orientation is, as a per the extreme example in the second diagram, and the reason why frozen roads are so dangerous.

7
Direction of friction when a car turns
4
Why does friction cause a car to turn?

18
How does a car turn without any skidding?
3
What causes a car's velocity to follow the front wheels' direction?
3
Is static friction the only force causing a car to move (without sliding)?
2
Rolling resistance and friction force in FBDs
0
Is rolling friction enough to make a car turn?
0
Direction of frictional force in general and in circular motion
0
Friction acting between road and tyres of a car
1
How does a front wheel drive car accelerate?