Suppose a wheel with radius $R$ is resting on a non-inclined surface. A torque $\tau$ is applied to the wheel center. In an attempt to prevent wheel from spinning, the ground applies a static friction force to the wheel at the contact point (parallel to the surface), then the wheel starts rolling without spinning. The same friction force also acts as a torque on the wheel around its axis. This scenario is depicted below: 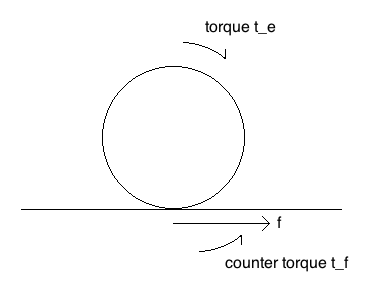 That's how I'm doing it:

The relation between torque $\tau$ and angular acceleration $\alpha$ is

where $I$ is the moment of inertia of the wheel around its axis.

The relation between torque $\tau$, force $f$ and lever arm $R$ is:

Being the engine torque $\tau_e$, the friction force $f$, the counter torque due to friction force $\tau_f$ and the moment of inertia of the wheel $I$ around its axis given by $\frac{1}{2}mR^2$:

The linear acceleration of the wheel is due to the friction force only:

This is the counter torque the ground applies on the wheel's edge (negative, because it pointing in the opposite direction of $\tau_e$):

The net torque causes angular acceleration on the wheel:

And that is the force $f$ from static friction which pulls the wheel forwards without making it spin or slip, and consequently, the force the wheel applies to the road surface at the contact point.

And it says: "The torque on the rear axle can be converted to a force of the wheel on the road surface by dividing by the wheel radius. (Force is torque divided by distance)."

That statement doesn't match the approach I used above. If the force of the wheel on the ground was simply engine torque divided by radius (negative, since it pointing in the opposing direction):

then the counter torque applied to the wheel would be

That means the net torque would be zero, and the wheel would just slip without rotating at all.

Am I doing something wrong on my calculations?

The trick here is that at the contact point the velocity of the wheel relative to the ground (with no slip) is just zero. Furthermore the acceleration is centripetal so the forces tangent to the wheel are zero.. So the frictional and torque forces must sum to zero. And therefore the ground force is just the opposite sign and the same magnitude as the force (torque/radius) exerted through the wheel by the engine.

I think your analysis is good and correct. The statement you've quoted doesn't contradict what you've done, it probably suggests a different way to look at the problem.

I think the statement simply states a method in mechanics- transferring a torque to another point (coordinate axes). In this case, from the centre of the wheel to the point of contact.

Mathematically, a torque can be replaced by a pair of forces, with one force at the centre and the other a point $P$ at a tangential distance of $r$. The magnitude of the force would be:

This $F$ is not the friction force.

The "counter torque" term doesn't make sense anymore since we have replaced the torque by a pair of forces. You can instead say the "torque" applied by the ground would be:

Your entire analysis is entirely correct and complete (and in my opinion the best way to go about it). There's no more information that need to be derived about this issue. Other analyses are just a different representations of the same facts.

The problem is in assuming the force is forwards at a contact point right underneath the axis of the wheel, together with the no-slip condition. This leads to zero friction force, since their is no friction when their is no slipping.

A solution can only be found when deformation of the wheel is taken into account, allowing the force to act on a different position of the wheel. See for example: http://www.phy.davidson.edu/fachome/dmb/PY430/Friction/rolling.html

Not the answer you're looking for? Browse other questions tagged homework-and-exercises newtonian-mechanics kinematics rotational-dynamics torque or ask your own question.

1
Ideal Rolling Motion on Surface with Friction
0
What if a vertical force acts on a body in pure rolling?
2
Angular acceleration in rigid bodies
0
How can an engine provide more torque at the point of contact than the ground's response by static friction without slipping?
2
The dynamics of a cornering wheel
0
Pure rolling of cylinder with arbitrary inertia
2
What is the exact role of friction in rolling without slipping?
0
Torque on accelerating tire