Is there any optical component that uniformizes the incoming light?

Is there any optical component in existence that uniformizes randomly pointing rays? 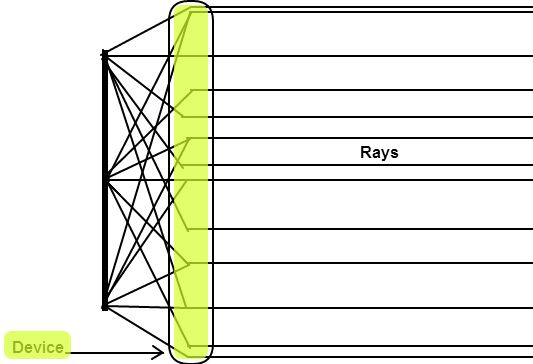 To add to Carl Witthoft's answer: your proposed device would violate Conservation of Optical Extent aka Optical Étendue unless it were an active device (i.e. one needing a work input to "uniformise" a given quantity of light).

The law that optical extent can only be held constant or increased by a passive optical system is equivalent to the second law of thermodynamics for light, because the optical extent of a light source is its volume in phase space.

The optical extent $\Sigma$ for the light radiated from a surface $S$ is:

where we integrate the intensity $I$ at each point $x\in S$ over all solid angles $\Omega$ taking account of the angle $\theta$ each component of the radiation from point $x$ makes with the surface's unit normal. Then we integrate this quantity over all points on the surface $S$.

So, the $\Sigma$ for your output would be nought, whilst it would be large for your input, so no passive imaging device can do what you ask.

So, another way of putting Carl's answer would be that the proposed device would have to "forget" the state encoded in the input light's wavefront direction at each point. Thus your proposed device, if at all possible, would needfully be an active device, needing work input of $k_B\,T\,\log 2$ joules for each bit of light state forgotten in accordance with the Landauer Principle form of the second law of thermodynamics. I say more about this in my answer here.

No. Not that you've defined "uniformize" very well here, but it appears you're asking for every ray from every source point to be directed in some parallel direction. Leaving aside self-diffraction effects, just stop and think: how would any material or device be able to accept a bundle of rays from all angles at a given point on the device, and emit them all in a parallel bundle? This would be the equivalent, say, of a mirror which reflected every incoming ray in the same direction regardless of the incoming angle.

Now, I could cheat really badly and propose a lasing medium which is pumped with all those incoming rays (i.e. absorbs everything) and emits energy in a collimated beam, but that's clearly not what you are getting at -- I hope!

No lossless optical system can form an image (of some radiation source) that is "brighter"; (more strictly higher "radiance" or higher "luminance" in the case of photometric rather than radiometric measure ), than the source. An early proof of this was given by the well known 19th century thermodynamicist , Rudolph Clausius, based on the second law of thermodynamics.

If such a system existed, and the source was an area of a blackbody radiator, at some Temperature T kelvins, the higher radiance (Watts per steradian per square meter (source area) ) image, applied to a receiving black body absorber, would drive that body to an equilibrium Temperature greater than T kelvins, and the second law forbids that.

Ergo, no such system exists.

So "brightness" (ugly word) or Radiance, (luminance) is an INVARIANT property of any radiation source. In paraxial optics, this is usually referred to as "the Lagrange invariant" nhu, or NHSinU for non paraxial imaging systems; n (N) being the medium index of refraction (relative to vacuum), h (H) being the height of the source object or image , and u (sinU) referring to the ray angle.

The quantity (nhu)^2 or (NHsinU)^2 , or an integral form of that is what Rod Vance referred to as "etendue", which is a $5 French word for "throughput."

Although simple proofs of this expression usually relate to "imaging" optical systems, the exact same restriction applies equally to non-imaging optical systems, such as CPCs (compound parabolic concentrators ), which are sometimes used in solar energy concentration.

Although often applied to sources and their images, the invariance of etendue also applies equally everywhere in the radiation propagation path. You can exchange luminous area for luminous solid angle, but their product is fixed.

Although radiant flux from say the sun spreads out over a large area on the earth, (surface irradiance in Watts per square meter), when perceived by the human eye, the eye forms an image on the retina, that is as "bright" (luminance or radiance) as the surface of the sun, less losses in the eye. Which is why, you shouldn't look at the sun.

Professor Roland Winston, formerly at the University of Chicago, and Argonne National Laboratory, but now at University of California Merced , and colleagues, made a non imaging solid (YAG) CPC concentrator that gave a spot five times "brighter" than the sun, but that spot was inside the YAG medium, of index about 2.7, and there is no way to get it out of the crystal because of TIR. (total internal reflection). The second law is not violated.

The student can find rigorous treatment of etendue ideas in Born & Wolfe, and other standard texts.

The word "brightness" is not any SI quantity or measure; you can't put any number to it.

Intensity is strictly defined for a point source, hence Watts or lumens per steradian, with NO reference to size. So intensity (radiant or luminous) DOES NOT change with distance from the source. However, real sources have a finite area or diameter, so close to the source, measurement of intensity becomes a problem. So long as we observe or measure, at a distance at least ten times the source diameter, we get results with little error. Actually about 1/2% at ten times source diameter.

Another peeve, is that some think lasers don't follow the inverse square law for wave front irradiance at a distance. They do, so long as you are several times the Raleigh range distance from the beam waist for the TEM00 fundamental mode.

Not the answer you're looking for? Browse other questions tagged thermodynamics optics entropy geometric-optics or ask your own question.

7
What is the best way to collimate light emitted by a LED?
4
Physical structures that trap information

11
light ray 'entropy'
2
Optical waveguide that can displace a 4D light field
1
Is there any optical phenomenon can't be explained without magnetic field?
0
Highly diminished image of an object placed at infinity
3
Light hitting a GRIN (Gradient-index) lens at the optical angle
0
What is the optical Lagrange invariant of an afocal system?
1
Can a lens explode in a strong enough laser pulse?