What keeps mass from turning into energy?

I understand the energy and mass can change back and forth according to Einstein. It is fluid; it can go from one to the other. So, what keeps mass from just turning into energy? Is there some force holding a subatomic particle together? What keeps mass in it's state? I hope this is not a silly question but I am clueless. Thanks

This is inevitably going to be an unsatisfactory answer because your question is vastly more complicated than you (probably) realise. I'll attempt an answer in general terms, but you have to appreciate this is a pale shadow of the physics that describes this area.

Anyhow, Einstein was the first to spot that energy and mass were equivalent, and you've no doubt heard of his famous equation $E = mc^2$. These days we write this as:

where $p$ is the momentum and $m$ is the rest mass. However relativity does not explain how matter and energy can be interchanged. That had to wait several decades for the development of quantum field theory (QFT for short).

If you have never encountered QFT it will strike you as a very odd way of looking at the world. We are used to thinking of particles like electrons as objects, much like macroscopic objects except smaller and fuzzier. However in QFT there is an electron field that pervades the whole universe, and what we think of as an electron is an excitation in this field. Similarly there is a photon field, and photons are excitations in the photon field. In fact all elementary particles are excitations in their corresponding quantum field.

QFT explains matter-energy conversion because you can, for example, add energy to the electron field to excite it and thereby create an electron. Alternatively an excitation in the electron field, i.e. an electron, can disappear by transferring energy to something else. So, for example, in the Large Hadron Collider two quarks meet with huge kinetic energies and they can transfer some of this energy into excitations of various quantum fields to produce a shower of particles.

But this can't happen in any way you please. QFT gives us the equations to describe how the kinetic energy of particles can excite quantum fields and thereby create matter. This is why, to return to your question, mass can't just keep turning into energy. Quantum field excitations only occur in specific ways described by quantum field theory.

And that I think is about all that can be said at this level.

Firstly, mass is energy. There is no distinction at all. Not all of the "mass" of an atom comes from protons/neutrons/electrons, for example, there is a chunk that comes from potential energy — this chunk actually dominates over the mass of the constituents.

However, we can reword your question to be "What stops nucleons from turning into other forms of energy?"

The question is in fact in reverse: why would the mass want to change? Most changes in physics require an impetus; a potential difference or something similar. There is none of that a priori here.

In addition, for these transitions from mass to energy, there usually are high-energy transition states, like in chemical reactions: 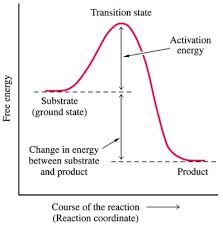 To reach the final product, one must supply enough energy to reach and overcome the transition state. An example of this is nuclear fusion: To reach the final state, one must first get the nuclei close enough, which involves a considerable input of energy.

Nucleons on their own have very long half lives, so while they may decay into other particles and energy, this is not seen. Most other particles, however, have short half lives and nothing stops them from decaying quickly into "energy".

I understand the energy and mass can change back and forth according to Einstein. It is fluid; it can go from one to the other. So, what keeps mass from just turning into energy? Is there some force holding a subatomic particle together? What keeps mass in it's state?

OK, here is the experimentalist's version:

The famous general $E=mc^2$ energy to mass connection when analyzed further shows that for elementary particles there exists an $m$ that is constant, called rest mass: the mass when the particle is not moving.

We have observed and measured this equivalence of mass energy an innumerable number of times. We have organized the elementary particles according to their rest mass into a very elegant model that describe the data, called the standard model.. All masses we observe from nuclei to stars are composed of these elementary particles in hierarchical order giving larger and larger masses the larger the ensemble, which are based on the energy equations above.

What is preventing the atom from collapsing into a neutral ball of mass/energy, what gives the intricate spectroscopic patterns of atomic spectra? The theory of quantization emerged to explain these data and developed into quantum mechanics, in contrast to classical mechanics. A basic result of the theoretical modeling is that only quantized energy states can exist and the electrons cannot fall down to the nucleus because this is not an allowed energy state.

Quantization explains the periodic table of elements : protons and neutrons do not collapse into an energy ball because of the stable energetic levels allowed by quantization.

The stability of the interplay between mass and energy that we observe in the macroscopic world is the result of an equilibrium between conservation laws and energy momentum conservation in the quantized microscopic systems.

It's not that mass and energy "can change back and forth". They are literally equivalent ways of talking about the same thing (assuming the particle is not moving). If something has mass than it also as energy and vice-versa. In fact, particles often have their mass given in units of energy.

Your question is somewhat like asking "if something has velocity, what keeps it from turning into speed?"

The way I understand it is that all mass comes from the force that joins the quarks together since empty space is not really empty and in case of a proton the particle is made of three quarks two up and one down they actually use up energy to create an empty space between them seeking "equilibrium" and since the energy that holds these particles doesn't just go no where it translates into what we call mass and looking at the matter this way explains how mass and energy is just one thing that is looked at from two perspectives, adding to that the weight (really small) of the quarks which is created by the "interaction" of the higgs field with them and can be looked at as if the quarks were metallic balls and the field is made of honey which doesnt make the balls stop but they doent go full speed either.... hope I helped :)

The simple answer is one word... entropy! There are two types of entropy we need to consider, 1)universal and 2)local.

Universal - right after the Big Bang, there was an "over abundance" of energy, therefore matter and energy were "readily" interchangeable. Energy became matter and matter became energy. As the volume of the universe expanded, local sections developed where the amount of energy available was not sufficient to change matter back into energy, so matter started to exist and populate the universe until most of the energy of the universe was used up.

Local - because of gravity, in time, there is sufficient local matter that fuses together and generates enough energy to once again convert matter into energy (stars), but because the volume of the universe keeps on expanding, there will be a time when matter will not be able to aggregate sufficiently to be able to repeat this proses.

13
Is it possible to create matter?
0
Is it really possible to create some mass only from equivalent energy?
1
Can matter be created from energy?
0
When does mass get converted into energy?
0
Does matter turning into energy, or vice versa, violate the Law of Conservation?
-1
Application of $E = mc^2$
-4
What decides that “it (mass energy) ” is going to become mass or energy?
1
When is energy converted to mass? What are the required conditions to do so?
5
What is the correlation between QFT and thermodynamics?
3
Why did the big bang need to produce equal amounts of matter and antimatter?
See more linked questions

4
Relationship between mass, energy, and a force?
1
Can we make usable energy from subnuclear particles?
1
Does an object gain mass as it moves further away from the Earth
0
Problem in understanding energy-mass equivalence
1
Where will the charge of a mass will go (having some net charge) when completely converted to energy?
1
Thermal energy turning into mass?