Example of the time-independent Schrödinger equation having a complex solution?

We know $\Psi(x,t)$ is complex, but can $\Psi(x)$ be complex? I have seen particle in a box, well and harmonic oscillator. All have real solutions for time-independent Schrödinger equation. Hence, I am curious to know examples where it is complex. This question says that it is possible, hence my request is for examples and references.

A charged particle in external magnetic field has the following Hamiltonian:

where $\vec A$ is vector potential, $V$ is scalar potential and $\hat{\vec p}=-i\hbar\nabla$ is momentum operator.

If you set $\vec A\not=0$, you'll get non-trivially complex wavefunction, and there will be no degeneracy due to time inversion symmetry as is the case for usual running wave, because magnetic field breaks time-inversion symmetry.

Rajesh: That means time independent Schrodinger equation does not demand complex numbers if one chooses to avoid them. right?

NOTE: This answer is sort of cheating due to the degeneracy, and thus doesn't really answer the OP's question. Hopefully someone with better knowledge can answer Rajesh's answer with real rigor.

Here's an example of a physical system which admits eigenstates which are nontrivially complex-valued. In molecular physics in the limit of the separability of vibrational motion from the other degrees of freedom, polyatomics with doubly-degenerate vibrational eigenbases have stationary states which can be represented via their occupation numbers in $\nu$ and $l$, the total vibrational quantum number and the vibrational angular momentum quantum number, respectively.

For example, here is a complex plot of the function $|\nu=3,l=1\rangle$ state: 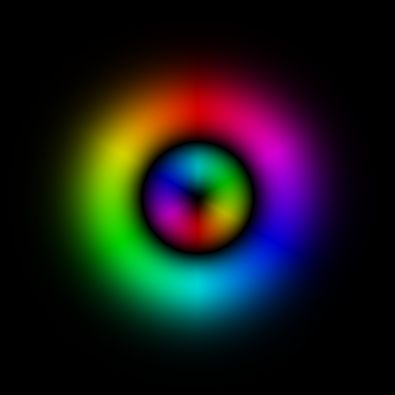 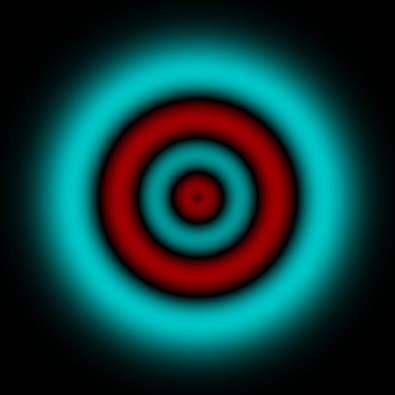 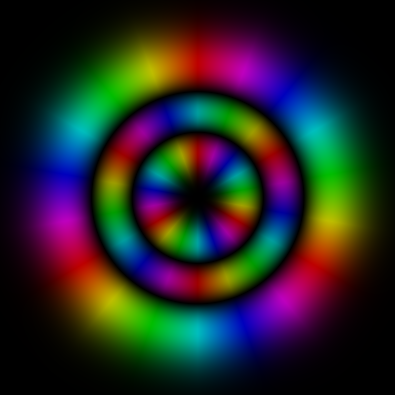 The plots are generated in a Hue colorspace, with the brightness proportional to amplitude, and color cyclically coded according to phase angle in the complex plane.

With the exception of zero vibrational angular momentum states, it is visually apparent that none of the wavefunctions can be represented as a real function multiplied by a phase factor $e^{i\alpha}$. Hopefully you find this sufficient as an example where a system has stationary states which are non-trivially complex-valued. I'm sure there are lots of other examples of cases where the time-independent Schrodinger equation has eigenbases which are nontrivially complex-valued, but this is the first example which came to mind.

Now that we've established that terminology, I claim that the question of whether or not the wave function is real up to a phase must be considered in two cases:

The examples you gave (particle in a box, harmonic oscillator) fall under case 1: there are no degenerate energy levels, so the eigenfunctions are real up to an overall phase. However I can easily give you physical examples that fall under case 2 (and I will later, and DumpsterDoofus and DarenW have already done so).

With that said, let's discuss case 1. We are looking for eigenfunctions $\psi(x)$ that obey the energy eigenvalue equation [working in the position representation] \begin{equation} \hat{H}\psi=E\psi \end{equation}

However, we are assuming that the energy eigenvalue $E$ is non-degenerate. In other words, there is only one eigenfunction with eigenvalue $E$, up to an overall factor. So it must be that there is some $\lambda$ such that

Before going on to case 2 it is interesting to see why the particle in a box falls under this case.

The hamiltonian for a particle in a box is the same as the hamiltonian for a free particle \begin{equation} \hat{H}=-\frac{\hbar^2}{2m}\frac{d^2}{dx^2}, \end{equation} with the boundary conditions \begin{equation} \psi(0)=\psi(L)=0. \end{equation} Since the hamiltonian is the same as for a free particle the eigenfunction must have the form \begin{equation} \psi(x)=Ae^{ikx}+Be^{-ikx} \end{equation} where $A$ and $B$ are complex coefficients. You can see that the general solution is not real up to an overall phase! This is because there are TWO solutions with energy $E$: one is $e^{ikx}$ and the other is $e^{-ikx}$. It is only after we impose the "particle in a box" boundary conditions that we find that the eigenfunction must have the form $\psi(x)=N\sin\left(\frac{\sqrt{2mE}}{\hbar}x\right)$. The boundary conditions essentially "project out" one of the two eigenfunctions with the energy level $E$. We are left with one linearly independent solution that can satisfy the boundary conditions, and by the general argument I gave above this eigenfunction has to be real. (And indeed, explicit calculation shows it is--it is the sine function). If you want me to go into more detail about this part, I would be happy to update the answer to be more precise.

The 1D harmonic oscillator is slightly different. There are two solutions for a given energy eigenvalue $E$. However only one will be normalizable. So for each energy level $E$ there is only 1 energy eigenfunction, and thus this eigenfunction is real up to an overall phase.

Even more to the point, since the energy eigenspace is degenerate it means that there are at least two distinct, orthogonal eigenfunctions $\psi(x), \phi(x)$ that have the same energy $E$. Any linear combination of them will also have the energy $E$. So it's very easy to construct a complex energy eigenfunction living in this subspace, even if $\psi$ and $\phi$ happen to be real: I just take $a \psi+b\phi$ with complex $a,b$.

On the other hand it's also easy to see that there are always special eigenfunctions in the eigenspace that are real. For example, $\psi(x)+\psi^*(x)$ is real.

It's useful to give an example. A good example is actually the particle in a periodic box. This is just like the particle in a box in that the Hamiltonian is the same as for a free particle. However, instead of imposing the boundary conditions $\psi(0)=\psi(L)=0$ we will impose the periodic boundary conditions \begin{array} \ \psi\left( 0 \right)&=&\psi \left( L \right) \\ \psi'\left(0\right)&=&\psi'\left(L\right) \end{array} where $\psi'(x)=d\psi/dx$.

These boundary conditions are appropriate in many situations, for example:

There are two special states with energy $E$ that are real. They are \begin{equation} \psi_c(x)=\frac{1}{2}\left(e^{ikx}+e^{-ikx}\right)=\cos kx, \psi_s(x)=\frac{1}{2i}\left(e^{ikx}-e^{-ikx}\right)=\sin kx \end{equation} However there is no reason to think that nature will "prefer" these states over other possible states with the same energy with complex valued wave functions. If we set up a periodic particle in a box in the lab and fixed the energy to be $E$, in general we would get a state that wasn't $\psi_s$ or $\psi_c$.

As I said, there are many interesting examples that fall under case 2. Another one is the 2D harmonic oscillator, with $V(x,y)=m\omega^2(x^2+y^2)$. In general, as you go to dimensions greater than 1, the solvable problems tend to have degenerate eigenvalues. So even though you start off with examples that are of the form of case 1, you should expect to see many more examples in case 2 as you advance in quantum mechanics.

For example, you can start with any real solution and multiply it by a phase factor $\exp(i\alpha)$, where $\alpha$ is constant and real, but is not a multiple of $\pi$.

In one dimension, a running wave, as eq. (2) in that question. There isn't any more one can do in 1D that won't come out seeming contrived.

In two dimensions, a good example is a circular box, or any spherically symmetric potential. The wavefunction can be written as a radial factor times an angular factor. The angular factor may be a linear combination of $\sin(n\theta)$ and $\cos(n\theta)$ or, equivalently, of $\exp(i n \theta)$ and $\exp(-i n \theta)$. The latter are nicer to deal with in terms of eigenvalues and angular momenta. It's the same as in 3D, without 'z', so let's go there.

Not the answer you're looking for? Browse other questions tagged quantum-mechanics wavefunction schroedinger-equation or ask your own question.