Rocket engine, perpendicular to the end of stick, in space

Rocket engine, perpendicular to the end of stick, located in cosmos, without atmosphere and gravitation. As in picture below:

In what direction will the stick move? In V or another direction?

The rocket is "magic" - it has no weight and the fuel it burns doesn't decrease the mass of the system. This can also be thought of as working in the limit where the time of burning a more realistic rocket is small enough that the mass of fuel burned is negligible compared to the mass of the stick.

The force supplied by the rocket is constant and always perpendicular to the orientation of the stick.

Initially, the stick will move in the direction of $\vec{V}$, but it will also start rotating, and as it does, its path will curve.

As the rocket spins faster and faster, the percentage change in its spin rate during each spin goes down, and the time-averaged acceleration of the center of mass decreases.

The stick is subjected to a constant torque $Fl$, with $F$ the force exerted on the stick by the rocket and $l$ the half-length of the stick.

The moment of inertia of the stick about its center is $ml^2/3$, with $m$ the mass of the stick.

The angular acceleration of the stick is the torque divided by the moment of inertia, $Fl/(ml^2/3) = 3F/ml$. Integrating twice with respect to time, we get the angle the stick makes with horizontal

The motion of the center of mass comes from $F = ma$. At any given moment, the force on the stick has components

Integrating these gives the motion of the center of mass.

The integrals for velocities are called Fresnel Integrals. They are mostly used in optics. The intriguing result is that a plot of the velocity as a function of time is the Cornu Spiral or Euler Spiral. 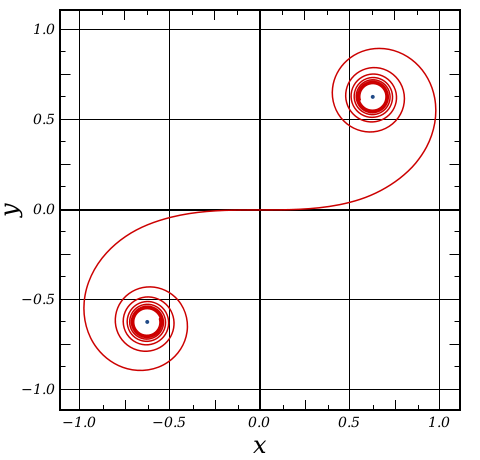 The picture is copied from Wikipedia. It's a little bit backwards because $x$ is usually taken to be the integral of $\cos t^2$, whereas we've taken it as the integral of $\sin t^2$. If you imagine rotating the picture 90 degrees clockwise, then mirror-flipping left and right, you get something that matches up with the original drawing.

The obvious answer is: "In a different direction." Or, more correctly, the direction of vector V will change continuously."

The engine will force the stick to rotate, continuously gaining angular velocity. In addition, assuming the stick begins at rest, there will be a linear component to the AVERAGE OVERALL velocity of the center of mass of the contraption. But it will not be in the direction of vector 'V' as you have it drawn. Somewhere slightly clockwise of 'V' for most reasonable choices of (impulse/mass) and (impulse/rotational_inertia)

Assuming duration of thrust is long enough, vector 'V' will eventually point in EVERY direction in the 2-D plane of the page in which it is drawn, multiple times. Any more significant detail than that requires more information on the mass, center of mass, moment of internia, initial angular velocity, thrust magnitude, and thrust duration.

Without atmosphere you have the simple case of no movement due to no atmosphere for the jet action to work upon, and the not so simple case of the stick rotating in a plane perpendicular to v due to conservation of momentum when its turbine blades rotate.

If the force of the engine is constant and equal to $F$, while the length of the stick is $L$, and it's mass moment of inertia $I=m\,L^2/12$ then there is a constant torque applied resulting in a constant rotational acceleration

where $\theta$ is the orientation of the stick relative some arbitrary fixed axis. Positive $theta$ is counter-clockwise from horizontal in the picture.

The integration of the acceleration vector over time escapes me, but it does look like it is related to Fresnel integrals.

Not the answer you're looking for? Browse other questions tagged forces newtonian-mechanics or ask your own question.

0
Apply force to one end of a rod in space: why not purely translational?

3
Confused about Newton's 3rd law
11
What is a rocket engine thrusting against in space?
3
How do reaction engines create a force against the rocket?
3
Is a rocket engine most efficient when its velocity is equal to the exhaust velocity?