Our Sun exhibits sunspot max/mins on about a 11 year period. It's a G2 spectral class on the HR Diagram. We know that some stars exhibit "starspot" cycles of various intensities and periods. These cycles are the result of changing magnetic activity within rotating stars.

Would a star identical to our Sun except metallicity, have the same cyclical behavior? Metals (elements heavier than helium), comprise about 2% of the Sun's mass. A metallicity increase for example, would imply a smaller radius for equal mass. Wouldn't a Sun-like star of higher/lower metallicity rotate faster/slower, which would speed up/ slow down its activity cycle?

Brandon's comment is really all there is to it. We don't really know why the length of the solar activity cycle is 11 years, so we have no consensus theory with which we would determine variation with respect to metallicity. In fact, it's not clear that the Sun is even normal when it comes to magnetic features. 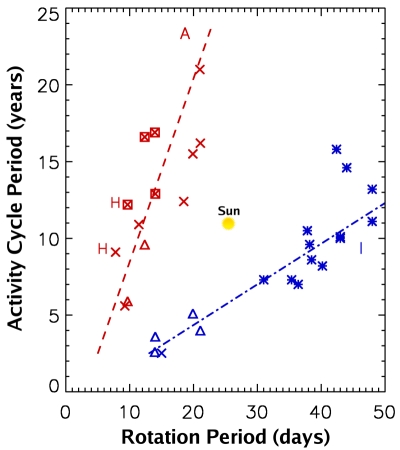 Activity cycle versus rotation period for a sample of stars. Note that the Sun seems to lie between two fairly distinct sequences (marked A and I).

You're right about the variation of radius against metallicity but the properties of the surface convection zone would probably also change, possibly affecting the dynamo.

A star with a higher metallicity will have a larger interior opacity and a thicker convection zone for a given mass.

The thickness of the convection zone is equally important in determining magnetic activity in stars that have an interface between a radiative inner region and convective envelope. The dependence is through the Rossby number - the ratio of rotation period to convective turnover time. The smaller this is, the more active the star is. This is a well established empirical correlation - e.g. see Dobson & Radick (1989) Pizzolato et al. (2003).

Thicker convection zones lead to longer turnover times and should lead to increased magnetic activity, however, increased magnetic activity probably leads to enhanced angular momentum loss, so that two stars of equal mass, but different metallicity, that started out with similar rotation periods as they hit the main sequence, will likely have different rotation rates at later times - the high metallicity star should rotate slower.

Given a lack of detailed understanding of the exact workings of the dynamo and how that translates into radiative losses and magnetic fields in the chromosphere and corona, it would be presumptious of me to hazard a guess which effect is more important. We cannot say empirically because (i) there aren't big samples of stars with measured magnetic activity with metallicities very different to the Sun and (ii) we can't estimate the ages of those stars very well in any case. In fact magnetic activity is usually used to estimate the age of such stars!!

The test might best be made using tidally locked binary systems. There the rotation rate is enforced by tides, allowing the influence of differing metallicity to be seen directly, perhaps even in stars of known mass. Unfortunately the samples of such stars are just too small at the moment. New surveys in progress or planned (e.g. Gaia, TESS, LSST) will uncover many, many eclipsing binaries which can be exploited for this kind of work.

You ask not really about magnetic activity, but about magnetic activity cycles - but we know even less about them than we do about the general levels of magnetic activity. Some stars like the Sun show cycles, others do not, others are completely flat. The difficulty here is of course that you have to study a star quite closely for many years before you can say much about cyclic activity, and the work just hasn't been done across samples with well determined metallicities and ages.

Not the answer you're looking for? Browse other questions tagged astrophysics sun stars metallicity or ask your own question.

33
How many times has the matter in our solar system been recycled from previous stars?
7
How did enough material from other dying stars accumulate to start our sun and planets?
3
Predicting stellar evolution and life cycle of a star
1
Origin of Stellar Nurseries
1
Stellar classifiaction and metals
2
why do hypergiants shed mass before death?
3
Why is the second stellar structure equation first-order ODE?
0
Stellar nucleosynthesis