I'm having a bit of trouble understanding the semiconductor band gap diagram on Wikipedia: 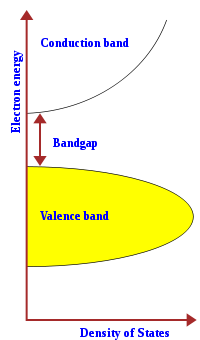 Why is the size of the band gap increasing with the Density of States (DOS) in the semiconductor material? I would expect the opposite given the intuiton that more occupiable energy states would mean a higher probability of an electron moving from a valence band to a conduction band?

You shouldn't see the density of states as a variable (the graph can be a bit misleading when plotted as it is). It would probably be better to see the graph with the axis interchanged.

There, you have bands with certain width and a density of states. The band gap is defined as the energy between the borders of the valence and conduction bands, where the DOS is vanishing. This is the minimum energy needed to promote an electron from the low energy band to the higher one. With higher energies, you can promote electrons deeper into the valence band and the effect will be stronger since the DOS is higher (aka more electrons available).

Thus, the band gap does not increase and your intuition is partially correct.

i.e., "density of states is a function of electron energy".

Here, I shall now rotate the graph so that the independent variable is on the x-axis, like it is in most graphs :-D 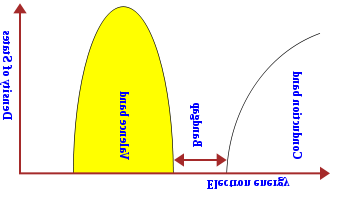 Not the answer you're looking for? Browse other questions tagged condensed-matter semiconductor-physics or ask your own question.