Black Hole evaporation through virtual couples at the horizon

I read about vacuum energy. It explains the Hawking radiation, the black hole necessary radiation:

Physical insight into the process may be gained by imagining that particle-antiparticle radiation is emitted from just beyond the event horizon. Vacuum fluctuations are always created as particle–antiparticle pairs. The creation of these virtual particles near the event horizon of a black hole has been hypothesized by physicist Stephen Hawking to be a mechanism for the eventual "evaporation" of black holes.

Is this "insight" supposed to make us to think that

So, considering the virtual particles of vacuum energy, we find two ways to add mass to the BH. Why do they call it BH (mass) evaporation?

First of all try to understand what vacuum fluctuations are. Virtual pairs exist everywhere appearing and disappearing below the threshold of our detection. Every photon, every charged particle is "dressed" by the vacuum fluctuations as it goes along. The following diagrams are a shorthand, they represent integrals that have to be calculated in order to get measurable predictions. 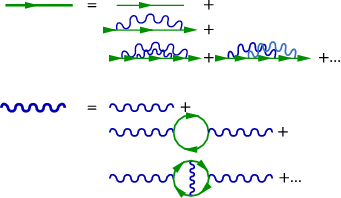 The green line is a particle with a mass, the blue squiggly on is a photon.

You cannot evaporate an object by adding mass to it. When you create a couple of real particles out of nothing and send one half to the Black Hole, you provide insight on Hawking evaporation only to very narrow-minded people. They can see that something is emitted from the horizon but this something hides the crucial fact -- another half of this something falling into the BH, increasing its mass.

The analogue you have in mind is wrong. Just over the horizon of the black hole the vacuum fluctuations still exist and are very strong, the energy supplied by the strong gravitational field of the BH. The horizon is the limiting surface from which a real particle cannot escape the gravity of the black hole, but a fluctuation just over the horizon of an electron positron pair, for example , where the momentum of the electron is pointing down whereas the momentum of the positron away from the black hole, the positron has a chance to escape, its mass is very small and there are large tails in the momentum distributions available. The energy for this is supplied by the black hole gravitational potential, by attracting the electron it kicks off the positron. All these have to be calculated with the correct integrals to see if the numbers are such as to lead to black hole evaporation, and they do.

your 2. is confusing. Once the positron is with momentum outside the horizon it is matter of calculations whether it will fall back or not. If it is from the high momentum tail of the distributions of virtual momenta it has the chance to escape, as the mass is very small.

Equivalently there are possible diagrams of graviton photon production, which at the horizon could eject a photon with an escape angle (example), and diminish the mass. It is mostly the photons that escape, a black body radiation, and reduce the mass of the black hole because of feeding off the gravitational field of the BH.

Anyway the effect for large black holes is very tiny, swamped by infalling radiation. It gets large the smaller the size of the black hole.

Not the answer you're looking for? Browse other questions tagged popular-science hawking-radiation virtual-particles or ask your own question.