I'm trying to bolster my understanding of the Rayleigh-Taylor instability, and I've gotten stuck on the point of which fluid (more or less dense) is being accelerated into the other. Cases of uniform acceleration make sense (e.g. plane-parallel fluids under gravity; or being accelerated by a piston), but my understanding falters in more exotic configurations. Consider the following:

A wind tunnel(-like) setup---without gravity---in which one fluid (density $\rho_1$) is at rest, while another ($\rho_2$) is blown into the first with a constant velocity. Because the two substances are colliding --- they'll both feel an acceleration. But because there is no acceleration between the reference frames of $\rho_1$ and $\rho_2$, how do you tell which configuration is stable, and which is not?

The initial conditions you are describing are those for a Richtmyer-Meshkov instability (RMI). Experimentally speaking, Richtmyer-Meshkov instability is usually generated by passing a shock wave through a perturbed interface between fluids of differing density. Although at first it might not appear that way, the situation you have proposed is entirely equivalent to a shock wave leading to an impulsive acceleration and can be modeled as such. In fact experiments on "incompressible" fluids under such conditions have been performed. In the absence of surface tension and gravity, both situations, heavy-light and light-heavy, are linearly unstable 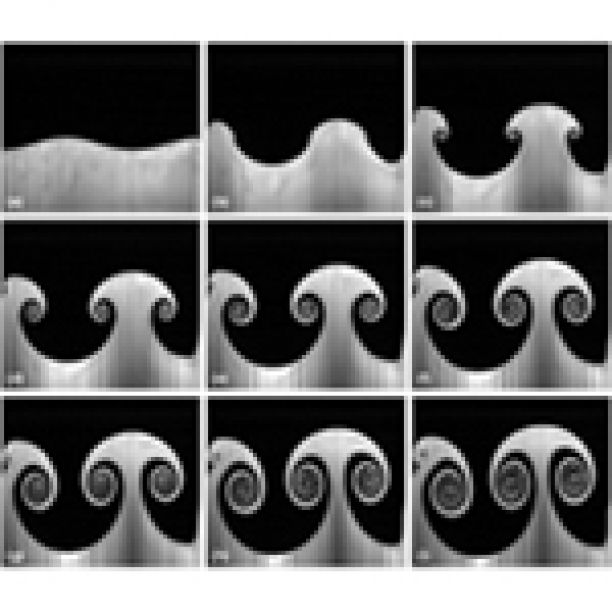 Instability occurring when a heavy fluid is superposed on a lighter one was first studied by Lord Rayleigh in 1883. The nature of this instability does not change when the problem is posed as a lighter fluid accelerating against a heavier one. G I Taylor first investigated it in this latter sense. The second paper in this reply will answer your question in detail. Its abstract says - "It is shown that, when two superposed fluids of different densities are accelerated in a direction perpendicular to their interface, this surface is stable or unstable according to whether the acceleration is directed from the heavier to the lighter fluid or vice versa. The relationship between the rate of development of the instability and the length of wave-like disturbances, the acceleration and the densities is found, and similar calculations are made for the case when a sheet of liquid of uniform depth is accelerated."

Not the answer you're looking for? Browse other questions tagged thermodynamics fluid-dynamics stability or ask your own question.

16
Why does water flow out of an upside-down bottle? (Rayleigh Taylor Instability)
1
Can dynamic viscosity be measured directly and without knowing fluid density?
2
Behaviour of Fluids under strong gravitational field
1
Why is inverting a cup with water in it an example of the Rayleigh-Taylor instability?
2
Rayleigh-Taylor instability with negative Atwood number?
2
Physical meaning of relativistic saturation of an instability?
3
Why don't solids fall in air?