How many of which particles are in Hawking radiation?

My understanding is that a black hole radiates ~like an ideal black body, and that both photons and massive particles are emitted by Hawking radiation. So for a low temperature black hole, photons are emitted according to Planck's law, but the peak of this spectrum shifts to higher frequencies as temperature increases.

For sufficiently large temperature, does it follow that massive particles of equivalent energy are also emitted, without preference to other particle properties? If not, I'd be interested to know what physics are involved in determining the form in which the black hole's energy is radiated away.

Here is the picture taken from the book 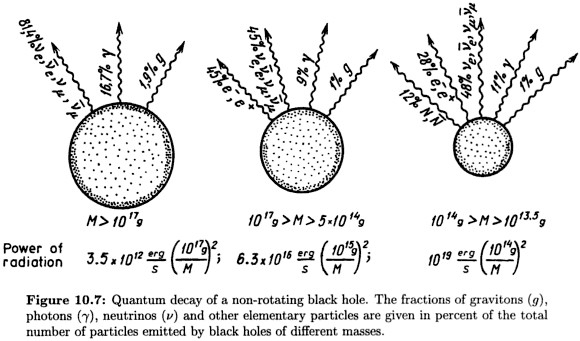 we see that for black holes of large enough mass the radiation will consist entirely of massless particles. For smaller masses electrons and positrons would appear, for even smaller - nucleons.

Note, that for even larger black holes, with temperatures smaller than the mass of neutrino (this includes all black holes of astrophysical origins), neutrino and antineutrino would disappear from the spectrum . Mass of neutrino is currently unknown but if it is ~1eV the corresponding BH mass would be $\sim 10^{22}\,\text{g}$.

Also note, that all those mass ranges in the figure are tiny by the astrophysical standards, so black hole of such masses would be primordial black holes

The short answer is that, based on our current understanding of particle physics and semiclassical gravity, black holes (except for the most microscopic ones) will produce a spectrum of Hawking radiation consisting of a combination of photons and gravitons. For a black hole with low angular momentum in relation to its mass, the ratio of energy emission is about 90-10 in favor of photons. For a spinning black hole, gravitons can be favored over photons.

In the earliest attempt to calculate the spectrum of Hawking radiation (Page 1976), the result was a prediction that of the energy emitted, "81% is in neutrinos, 17% is in photons, and 2% is in gravitons." This was in 1976, when neutrinos were believed to be massless. A black hole will not emit a significant amount of radiation in any form such that the hole's characteristic temperature (in units with $k=1$) is small compared to the particle's mass (in units with $c=1$). (See Traschen 2000, p. 21.) Since we now know neutrinos are massive, they're out of the running except for the very smallest of microscopic black holes.

For a Schwarzschild black hole emitting massless particles, the power $P$ is proportional to $\Gamma \gamma M^2$, where

At low frequencies (wavelengths large compared to the Schwarzschild radius), $\Gamma$ can be frequency-dependent, so the spectrum is not that of a blackbody. Because of the form of the proportionality above for $P$, you can define $g=\Gamma \gamma$ for each particle species, and sum over all the $g$ values to find a total $g$. Still restricting to a Schwarzschild black hole, the values of $g$ for various spins (spin,g) are as follows (Anantua 2008).

But these are only for a Schwarzschild black hole. The situation may be totally different for spinning black holes (Dong 2015).

Once evaporation proceeds far enough, and the black hole's temperature is comparable to the masses of fundamental particles, you can get all kinds of particles evaporated.

Note that based on recent research there is starting to be some doubt about whether gravitational collapse of stars actually leads to black holes, or instead to naked singularities. That is, cosmic censorship is starting to look doubtful, even to the extent of possibly being violated in astrophysical collapse (Joshi 2013). If so, then all of the above is false for astrophysical objects.

Not the answer you're looking for? Browse other questions tagged quantum-mechanics black-holes astrophysics hawking-radiation or ask your own question.