Do electrons collapse into nucleus, if electrons in the atom are constantly excited?

From the Bohr's atomic model, it is clear that electron can have only certain definite energy levels. When the electron is present as close to the nucleus as possible, the atom has the minimum possible energy and is said to be in the ground state. When energy from some outside source is supplied to it, it can absorb a definite amount of energy and jumps to higher energy state. Such a state of an atom in which the atom possesses more energy than possessed in the ground state is called excited state. These excited states are unstable and the electron tends to come back to lower energy level. This transition (change) from upper to lower energy level occurs with a jump and energy is emitted in the form of a quantum equal to difference in energies between the two levels.

I have a doubt here, if electron absorbs energy from the outside source and jumps to the higher energy state, it will be now storing absorbed energy, as potential energy at the excited state. If electron emits all the absorbed energy (quanta-difference in energies between the two levels). By virtue of what energy does electron come down? I mean, in common situations, we say that an object at any height comes down converting it's potential energy into kinetic energy. Here in case of electron, it has already emitted absorbed energy as quanta. So, is it that electron losses some energy other than the energy absorbed from the source, to come down to ground state. I thought, if it was a possibility, then electron would constantly need to lose energy, whenever excited, at last, it would collapse into the nucleus. But, this not we really observe. I think there might be some misunderstanding by me or there might be any of the existing model like quantum mechanical model, which could account for this. If any were the case, please explain.

Based on some of your comments, I think what might be tripping you up is the first statement you started with:

From the Bohr's atomic model, it is clear that electron can have only certain definite energy levels.

...If suppose, we assume electron losses total energy, electron can't stay in any particular shell, as it would not have that particular value of energy.

That means the expectation value of a hydrogen electron state is going to look like $$\langle E\rangle = \sum_n |a_n|^2 E_n\text{,}$$ where $\{a_n\}$ are arbitrary complex values with $\sum_{n>0}|a_n|^2 = 1$ and $E_n$ are energy levels in increasing order. Because of the sum-to-$1$ condition, taking any portion along the other energy eigenstates will increase energy compared to the ground state.

In other words, even if the electron state does not have a definite energy, you still can't go lower than the ground state.

Suppose, I have a cup of hot coffee on the table. It will be continuously losing energy in the form of heat, but it stays on the table, though there was a energy loss. Now, all of a sudden, I take off the table, the cup of coffee converts it potential energy into kinetic energy to come down.

If you don't shake the table, the coffee cup will sit there, forever. Similarly, nothing perturbs the electron in an excited energy eigenstate, then it simply will never decay. It cannot: energy eigenstates are stationary; they do not evolve into anything other than themselves.

However, being completely without external perturbation is actually impossible. The uncertainty principle provides the electromagnetic field with vacuum fluctuations, which will perturb the electron even if nothing else in the environment does. In your analogy, this (or something else) provides the "shaking of the table" for the electron. Once the electron state gains even a tiny component in some other energy eigenstate, the state can evolve in time.

In other words, one can think of spontaneous emission as a particular type of stimulated emission where it's the vacuum that does the perturbing.

Here in case of electron, it has already emitted absorbed energy as quanta. So, is it that electron losses some energy other than the energy absorbed from the source, to come down to ground state. I thought, if it was a possibility, then electron would constantly need to lose energy, whenever excited, at last, it would collapse into the nucleus. But, this not we really observe. I think there might be some misunderstanding by me or there might be any of the existing model like quantum mechanical model, which could account for this. If any were the case, please explain.

As others said the Bohr model has been superseded by the quantum mechanical formulation of particle interactions in the microcosm. There are definite energy levels that can be occupied by electrons and there is a ground state from which the electrons cannot fall lower generally.

Please study what these orbitals mean, which are the result of solving for the Schrodinger equation for the atom . They show the probability distribution in space for the electron around a nucleus:

The shapes of the first five atomic orbitals: 1s, 2s, 2px, 2py, and 2pz. The colors show the wave function phase. These are graphs of ψ(x, y, z) functions which depend on the coordinates of one electron. To see the elongated shape of ψ(x, y, z)2 functions that show probability density more directly, see the graphs of d-orbitals below.

Note that the angular momentum = 0 (S states ) have a probability for the electron to be at the center where the positive charge of the nucleus is. Because the nucleus is orders of magnitude smaller than the space covered by the orbital the probability of the electron being captured by the nucleus is infinitesimally small (together with other phase space considerations), but it happens for proton rich nuclei where the fields are strong. It is called electron capture. In these rare processes when an electron is captured it will emit a photon/gamma characteristic of the ground state it lost. There is no continuous loss because the system is quantized.

I thought, if it was a possibility, then electron would constantly need to lose energy, whenever excited, at last, it would collapse into the nucleus.

You seem to have forgotten that when the electron is excited, it gets energy, which is then released when it emits it. So it wouldn't collapse because energy absorption and emission are balanced.

Reading your comment in reply to mine, I understood what you wanted to ask.

This is where so many people are confused. Since we start middle school chemistry, we are taught about electron orbits which are like concentric circles. Everyone innately assumes that the 1st orbit is inside the 2nd orbit, which is inside the 3rd and so on.
It isn't like that!

Electron orbits are not comparable to the solar system. A higher energy shell doesn't mean one with a larger radius.

When an electron loses energy to come into a lower state, it doesn't mean it actually reduces its radius - just its energy state. Bohr's model was simply a theory, which explained a lot of occurrences, but once you start learning about the quantum mechanics of an atom, you'll see how we believe it to be right now.

If you have started learning about the s, p, d and f subshells, I can explain a bit further.

Most people who haven't pictured the atom correctly - thanks to the middle school analogy of the solar system - assume a lot of wrong stuff about the atom.

For instance, all the atomic orbitals exist centred at the nucleus. Many people picture it like this: 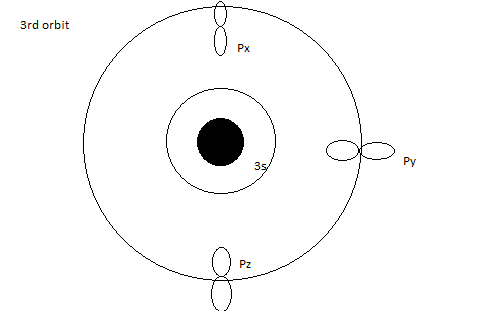 As a side note, remember the Pauli exclusion principle, that no two (fermionic) particles can share the same state. So two electrons cannot share the same exact state e.g. at the ground state there are only two electrons, each with different spin. Also, there is the uncertainty principle, that you cannot precisely the position or momentum of a particle (and the more you know of one of those factors, the less you know of the others), and that each particle has a wavelength that roughly guides the particle's "orbit" in the classical sense.

Even if an electron gives up energy (and the quantum rules require certain energy states in a bound system), the nuclear repulsive forces (not electromagnetic) would keep it from getting "near" to the nucleus itself. Take a look at the kind of speeds particles are accelerated to in CERN or LINAC to allow them to collide with a nucleus.

Not the answer you're looking for? Browse other questions tagged quantum-mechanics energy atoms atomic-physics or ask your own question.

195
Why don't electrons crash into the nuclei they "orbit"?
52
Why do electrons occupy the space around nuclei, and not collide with them?