Number of blades in a helicopter rotor

I was wondering how it is possible to determine what is the optimal number of blades in a helicopter rotor. I think that the length of the blade is involved as a longer blades would have to spin slower in order to avoid the extremes to overcome the speed of sound, and so one should be able to add more blades avoiding turbulences. Are there any other parameters? Is there a way to combine them together or we just rely on trials and empirical experience?

Looking around a bit I've found this question Wind generators - why so few blades? The physics case is just opposite, however that situation has a pretty different answer.

It seems to me that there is a correlation with the weight of the helicopter, for instance the CH-53 has 7 blades while the famous bell 206 just has two. Still comparing it to the case of wind generators, I cannot get an overview of what's going on. 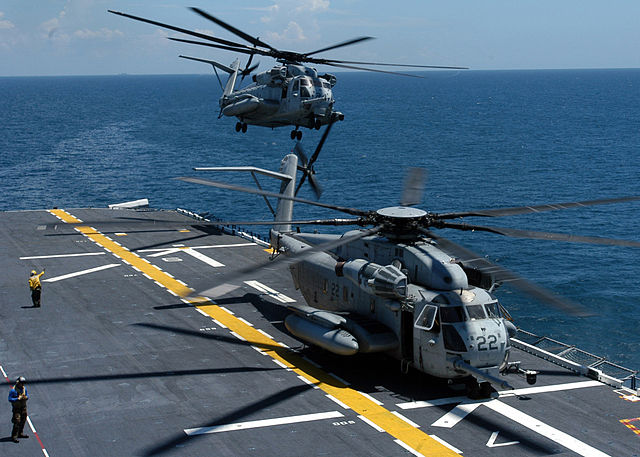 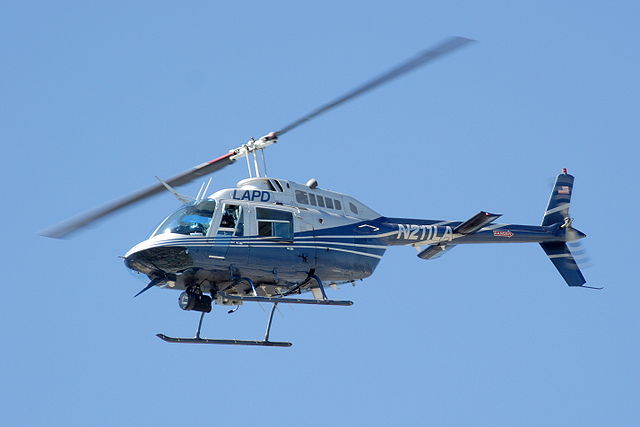 I wont give you precise formulas, but one can calculate this. The most efficient theoretical rotor has only one blade. Obviously 1 blade would cause problems due to misplaced center of mass. That is why we use at least 2. Then to get more thrust you need long blades and you need to spin them very fast. There are two issues that would force you to have more blades. First is the blade tip must remain subsonic. Second is the practical size of the rotor. Very large rotors would require large areas to land and maneuvering would be more difficult. So basically more blades mean more power but with less efficiency and they take up less space. A particular helicopter design should use as little blades as possible given specific requirements.

This is something I have looked into a great deal, having an interest in model rotorcraft, including single bladed machines. As with nearly all things related to aviation, and engineering in general, there is no optimum or best answer to number of blades. It is all about trading off cost, performance, reliability, weight, etc. etc. etc. "Best" will depend on performance goals, price target, reliability requirements, etc.

Helicopter rotor blades require at a minimium some mechanism to control the pitch of the blade (AKA feathering) and most also allow the blade to flap up and downward, or to teeter in pairs. These mechanisms are mostly required to be duplicated for each blade, so adding cost, weight, and increasing the possibility of failure. These considerations must be weighed (heh!) against considerations of adding additional blades.

A rotor blade operates in the wake of preceding blades, even if only their own in the case of a single bladed rotor. This causes a loss of efficiency, and can also lead to vibration and resonance problems. These factors as well as basic simplicity goal (KISS) push the designer toward having a minimum number of blades.

Single blade helicopters can work, and have been built. Nature supplies the auto rotating maple seed as a gliding inspiration. A sizeable counterweight is required for balance, which makes this an unpopular choice in most cases. In model helicopters it is possible to use the engine as the counterweight, but this is not really practical for full sized helicopters, where single bladed designs are only a curiosity. Here is an example of a single bladed model helicopter, basically a powered maple seed: http://www.stephanb.rchomepage.com/Charybdis.pdf

Interestingly, it is NOT required to balance the lift on the rotor. There is sufficient outward force due to radial acceleration (notice I am avoiding the argument around "centrifugal force") to balance the upward force. Many (even most?) helicopter blades are hinged to allow upward flapping. In order to force balance the lift, either the blades must be allowed to "cone" upward, or the flap hinge needs to be below the rotor plane, giving the spanwise force a vertical component. It is not uncommon for tip weights to be added to the blades in order to allow the machine to be supported at a reduced cone angle or rotor speed. (this also makes autorotation landings less critical)

While the lift of a single rotor can on average support a machine, the fact that it is moving around the rotor axis will result in fairly severe vibration, so while not strictly required, it IS indeed desirable that the lift be balanced. This, and avoiding an otherwise useless counterweight is why all Helicopters have at least two blades...this is the practical minimum.

For exactly the same reasons that high aspect ratio wings (long, thin) are more efficient, long rotor blades are similarly more efficient. The reasons why deserve their own answer.

But high aspect ratio blades can create many practical problems:

-They need to be stiff in torsion, which adds weight. This in turn creates large forces at the rotor head, as well as increasing the moment of inertia, which can add stresses when maneuvering, and even make the machine over sluggish.

-As the forward speed of a helicopter increases, the difference between the speed of the advancing and retreating blades becomes problematic. If the retreating blade has zero airspeed, then it can produce no lift. Well before zero airspeed, it can't contribute it's share of lift, which causes vibration issues similar to the one-bladed helicopter at hover. The solution is a smaller, higher speed rotor, more blades, or both. Yet the advancing blade becomes less efficient, and needs to remain subsonic, so adding blades becomes the escape route.

In addition, as the mass of, and forces on the blades increase, a two bladed rotor causes increasing stress to the mast. This is because only the stiffness of the mast allows control of the blade pitch to be maintained. If a two bladed boomerang were straight, it would just flutter to the ground. Bending it into an L shape allows it to define a geometric plane, so it can spin stabley. The point is that three or more bladed rotors greatly reduce the stresses on the rotor mast, because the rotor could spin in a stable configuration with no mast at all. Adding blades does increase the moment of inertia of the disk, so dynamic loads on the mast can still be high when maneuvering, but less than some might think since all the roll and pitch forces are generated at the rotor blades, not from the mast.

When the machine is in forward flight, the lift of a two bladed rotor will pulse, mainly because the available lift goes as the square of the instantaneous airspeed of each blade. More blades greatly reduce the magnitude of these lift pulses.

So as the size and weight, and speed of the machine increases, two blades become more of a liability than the advantages warrant. Three blades make a stable disc, and are only a bit less efficient than two blades. In some cases, an entire second rotor is added rather than adding more than three blades to a single rotor...Certainly complex, but it provides a solution to countering the torque on a single rotor machine, so the complexity of a tail rotor system can be saved.

Modern material science has provided elastomers that can greatly simplify, ruggedize, and improve the reliability of the connection at the root of the blades. This has made five and even more bladed machines practical, because it has reduced the complexity penalty of the extra blades.

The tip speed of a rotor blade has to remain subsonic, as you say. Also the forward speed of the aircraft subtracts from the speed of the backward-moving rotor, and adds to the speed of the forward-moving one. Most of the lift comes from the end of the rotor, because lift is proportional to airspeed squared. Each rotor can only carry so much weight, as a function of its chord length. A rotor is a wing, and in general wings of high aspect ratio (length to width) are more efficient (use less power for the same lift). When there are more than two rotor blades, the blades can swing forward and back in the turning direction, a stability issue that must be addressed.

There are a lot of issues to consider.

This next one is more about cross-sections.

Regarding lift more blades means more flying wing area which is a good thing up to the point where the following blades create too much turbulence.

(2) blades is symmetrical balanced and efficient. Why would (4) blades not be , if not twice as good, at least significantly better and worth the cost to build a more complicated swashplate for collective pitch controls?

The Chinook 52 and (7) blades, All I can say is that cost was not a consideration when they designed that air ship.

I am flying two (2) blade helis And I am wondering how the performance and handling would change.

NSWilson4NSWilson4
1
$\endgroup$
1
Add a comment  |
Highly active question. Earn 10 reputation (not counting the association bonus) in order to answer this question. The reputation requirement helps protect this question from spam and non-answer activity.

Not the answer you're looking for? Browse other questions tagged aerodynamics turbulence optimization or ask your own question.

45
Wind generators - why so few blades?

13
Helicopter in an Elevator
7
Number of blades in a fan
0
Changing number of wind turbine blades
0
Do blades on the same rotor really move at different speeds?
3
Are optimal turbine blades also optimal fan blades?
0
How and where does air that is displaced by a constant moving vehicle flow?