What exactly is “pressure”, and what's its relation to force?

I have looked around, and I will admit that I'm a bit lost on the definitions.

Pressure (symbol: P or p) is the ratio of force to the area over which that force is distributed.

That's a bit hard to understand at first, I'll have to say. Is vaguely saying "pressure" relative to "air resistance", or drag? Because they seem to be mixed around often.

refers to forces acting opposite to the relative motion of any substance moving in a fluid.

Sounds unrelated to pressure, so let's move on.

If pressure is the ratio of force to an area which the force is distributed, wouldn't anything be force then? Wind's force is covered over an area that it's distributed from. A punch would count too, based on how I understand pressure. I have always envisioned pressure as a uniform body of gaseous force or energy acting versatilely upon everything, such as below illustrates: 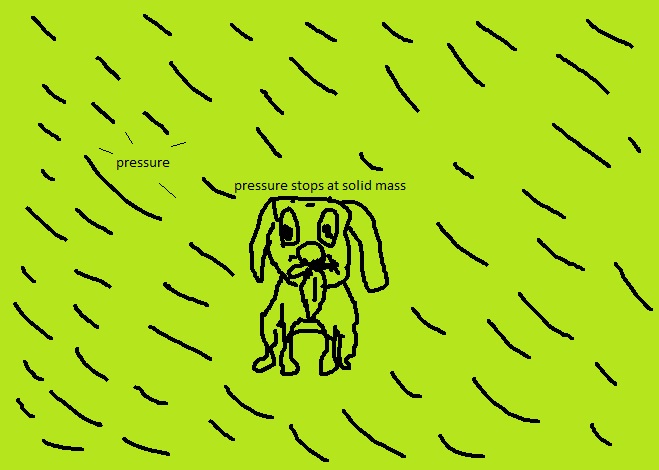 People often say pressure in exchange for force, such as when someone shakes someone's hand very hard (with a strong grip), one will say that the force is pressure. Is this correct? If so, why, and how do force and pressure coincide?

To be honest, I think physics classes carefully articulate things in order to avoid veering into the direction that you're dabbling into. Because things will get complicated.

Let me start with the statement:

This is wrong, but it's a very clever attempt at explaining the world. Something changes at the surface of solid matter. However, force is still transmitted.

There is a measurable difference in the properties of a solid block of matter under an atmospheric pressure. You could (for a hypothetical) have a material that changes color when its stressed. We actually have stuff that does very similar things to this. My point is that the surface pressure effects a physically meaningful. A solid is a lattice of atoms that hold their relative positions through electron bonds. A pressure on the solid's surface decreases the distance between the atoms.

Nonetheless, you could remove the pressure entirely and the solid won't fall apart. This is because chemical bonds are roughly a Lennard-Jones potential. This isn't exact, and it differs by the specific bond, but it's more than sufficient for our purposes. This potential is: 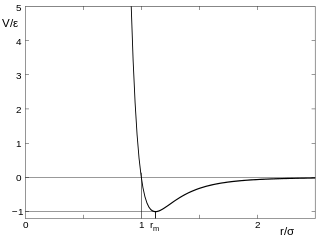 This is a "potential" graph for a chemical bond. Here, "potential" is a mathematical concept. It is the anti-derivative of force. Again, I'm speaking fairly specific to solids. But I want you to consider a few things here which are important to get the FULL molecular picture of pressure, which is really what your question asks for:

Now let's talk about relative pressure (sometimes gauge pressure). This is the form of pressure that physics class wants to teach you. That's because Newtonian physics (even much of fluids) can be very well-conceptualized with no mention of atoms whatsoever. When you press your hand on a wall, or your foot on the ground, the force is small compared to the ambient pressure, but ambient pressure permeates everything equally. In those cases, we are dealing with non-isotropic forces - and by that I mean directional.

The definition of pressure actually doesn't care whether it's relative, absolute, or isotropic. It's just force per unit area. That's just a unit, and units reoccur in different contexts all the time.

Basically any force you entertain in basic physics can be re-imagined as a pressure just by taking the cross-section somewhere. This is true for pulling with a rope or pushing with a stick. There's a sign difference between "pulling" and "pushing", and in materials those are experienced as "tensile" and "compressive" non-isotropic stress... which has units of pressure.

I hope that helps, but I won't be surprised if you're just more confused. I should mention the material stress tensor. If you appreciate this, and you appreciate the nature of zero/absolute pressure, then you understand this subject entirely. 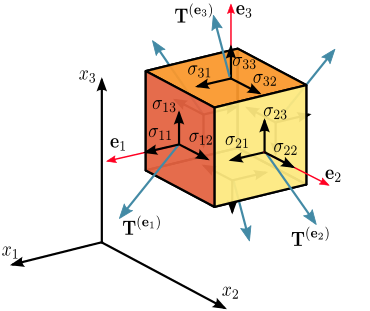 In this model, we think of a solid as a box, and we do mathematics on it. You can see there are lots of vectors there. If this is an imaginary box around some gas, all components other than those that push directly toward the center of the box are zero, and that is the idea of an isotropic pressure. If you imagine a solid box floating in space, then all the vectors are zero.

From that standpoint, absolute pressure, and the other kinds of pressure should make sense.

That is one type of pressure. What we call the "static pressure" of a fluid. It pushes inwards on objects inside the fluid and outwards on the container containing the fluid.

In a static no-gravity situation all objects in contact with an idealised fluid will experience the same pressure and the net force on a rigid object completely inside or surrounding the fluid will be zero. If we hook two cylinders of different sizes to the same hydraulic line then the larger cylinder will produce more force. The pressure of the fluid in both cylinders is the same but in the larger cylinder it is applied to a larger area. The flip side of course is that it will take a larger volume of fluid to move the large cylinder by a given distances.

However in the real world gravity exists and things are not static, so different objects and even different parts of the same object can experience different pressures.

This is fundamentally what causes properties such as boyancy and air resistance. Different parts of the object experiance different pressures and these pressures result in a net force on the object.

Regarding solid objects there is no reason you cant reason about the pressure between two solid objects. It's just that in most cases it is simpler to think in terms of the total force.

Let's say you have a piston in a cylinder. If the pressure is 2 atmospheres inside and one atmosphere outside, so the net force is roughly 14 pounds per square inch. The surface area of the piston plunger is 4 square inches. So the outward force on the plunger is 4 X 14= 56 pounds. (I generally define pressure as the force per unit area. That is equivalent to the definition you gave but is seems easier to turn pressure x area into a useful result.)

Force is a quantity which is defined on an object. An entire object. This means force is 'extensive', since it is of the scale of the object being pushed, pulled, lifted etc. One unit of force is pounds (lbf), another is newtons (N).

Pressure, however, is a quantity which can be determined at each microscopic bit (of the area) of an object. Pressure is the 'intensive' quantity corresponding to a force.
Pressure units include pounds per square inch (psi), and pascals (Pa).

So, a pressure gauge on a hydraulic cylinder's fluid may read 60 psi, when the hydraulic ram, driven by a 4 square inch piston, exerts 240 pounds of force. Knowing the pressure (intensive) quantity does not suffice to tell the force, you ALSO need the size of the piston. And knowing the force does not tell you whether the hydraulic seal is overstressed, because that depends on the pressure rating of that seal; every point on the seal has to sustain the pressure applied.

It's more complicated than numbers, of course, since both force and pressure are vectors. Static fluid pressure is always orthogonal to any surface, while other pressures may follow different rules for direction.

You are completely correct. Any non-ideal, real-world force is really a pressure. Any force in the real world must be applied over some area (even if it's very, very small)

However, in many problems, it is sometimes practical to model a pressure as a single force applied in a single direction at a single point — in many systems, pressures can be (exactly) simplified to a so-called resultant force, which greatly simplifies the problem.

Edit: I don't think I answered your question well.

If you're able to characterise a force (which it seems you can), you can simply understand pressure as a bunch of small forces acting on an object at different points in different directions.

Anything that you consider to be a pressure can be interpreted as a sum of forces.

Not the answer you're looking for? Browse other questions tagged forces pressure drag or ask your own question.

2
Small scale water power, how does water volume and hight convert into electric energy?
0
Calculate a drag force on a sphere?
0
How is fluid pressure defined?
1
Confusion between pressure and force
1
How to understand air pressure against a hand pump?
0
Relation between excess pressure of a spherical droplet and its vapour pressure