What are the ideal centers of mass and rotation for a steadicam?

1) A steadicam is a stabilizing mount for a motion picture camera, which mechanically isolates the operator's movement from the camera, allowing a very smooth shot even when the operator is moving quickly over an uneven surface.

2) How does it work (image courtesy of wsclater): 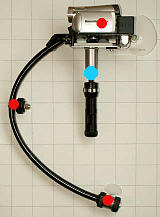 The idea behind a steadicam is that the center of the mass is taken out of the camera itself. Therefore, when moving / panning the whole system (steadicam + camera), the motion of the camera itself is more fluid. This can be seen in action in this amazing youtube example.

How do we determine the ideal distance of the center of rotation from the camera?

Disclaimer: This is neither a matter of profit, nor a matter of homework. I'm just trying to build some of those for my own personal use, especially to find out how it really works, as I'm kind of amazed from this.

You need to know two things to design the system:

Having read the wikipedia and watch some video I'm guess the answer to (1) is "a short distance directly below the gimbal" (for both high and low mode, though that means slightly different places).

How to calculate the CoM for a set of point masses.

and an identical equation for $y$ and $z$. And now we know the location of the the Center of Mass.

For continuous objects, we could turn those sums into integrals, but you probably don't want to do that. Especially as you don't know the mass distribution of the camera.

Combine several such measurements and you can find the three diminsional position of the CoM.

Now here's the trick. Once you know the CoM for an extended object, you can treat the whole thing as a point mass at that location (for the purposes of calculating the CoM of a system that includes the object).

OK. Making progress, but were, still not done.

You know where you want the CoM, and need to find where to put the masses. Which is backwards from what we did above.

You need to control three values (the $x$, $y$, and $z$ positions of the CoM), and you have three equations. Which means that you can have only three adjustable parameters in your system.

Side note: The value of $y$ is easy, if you position the camera so that it's CoM is centered. Then, because everything else is symmetric, it happens automatically. So I'm going to only worry about $x$ and $z$

What you do is fix all the position relationships in the system except for two. Maybe the height of the lower control mass and the horizontal position of the middle one. Those two you make variables. Now you write down the CoM equations above *with those two variables in there and the desired values for the location of the CoM. The resulting system is solvable. Do the algebra and you're done.

But leave some ability to fine tune things (say by putting the masses on threaded rods). This lets you only worry about getting close with the calculation. The pictured one appears to use a flexible support to provide the adjustability. That will work, but may require constant tinkering.

Hang any apex of your steadycam and a plumb-line from a point in space. Trace the path the plumb line takes from one apex to another point. Repeat this for another two apexes. Where all three traces intersect is the centre of mass of your steadycam.

Not the answer you're looking for? Browse other questions tagged rotational-dynamics stability mass or ask your own question.

2
Where are the centers of mass for a baseball bat vs. a cricket bat?
3
What happens to a rotating rod that breaks in two?
11
The most stable way of standing in a bus
6
On the stability of black holes
0
Do objects rotate around their center of mass or not?