How does the 'water jet pack' work?

So I was cruising around at YouTube and saw this sweet video, and as I was watching started to wonder: "How is this possible?".

For a little bit of background, in case you decide to not watch the video, what is happening is an individual can hook out a 'pack' that sucks up water and then shoots the water downward: 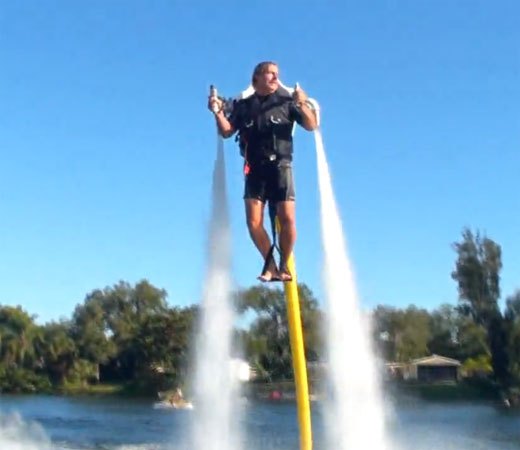 This water Jet Levitation (JetLev) causes the rider to be able to fly upward into the air and move about forward, backward, side-to-side and even underwater (you have to watch the video for that). So my question is: How exactly is this possible?

Well I ought to be studying for a physics exam, but I'll consider answering this to be my studying.

Newton's third law states that for every action, there is an equal an opposite reaction. In this case, the jetpack is ejecting water at high velocity toward the ground. This is generating a significant force downward. The resulting opposite force pushes upward, elevating the rider.

The actual pump for the unit is located on a floating watercraft attached to but not elevated with the jetpack. This is how there is enough force for the unit to fly - otherwise, the mass of the pump would be so great that it would be difficult to maintain enough pressure to keep both the pump and rider aloft.

I don't know the specifics of how it orients itself, though I imagine that by making small variations in the water pressure and orientation of each nozzle, one can cause an imbalance in the forces acting on the rider, casing them to move one way or the other. 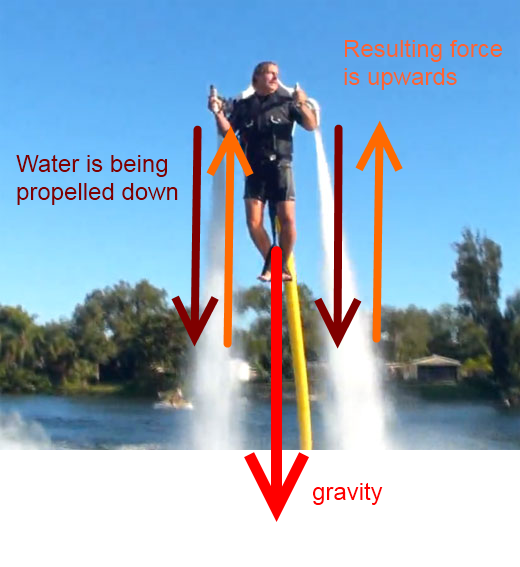 As with any other rocket, ejecting the propellant out the nozzle generates an equal and opposite thrust. The difficulty here is that the propellant is in the body of water the device flys above.

If you read the FAQ at the jetlev website you will see that power and pumping is provided by a separate floating unit.

They claim to have rolled it out as a commercial product last month (March 2011). Presumably you'll be able to rent one at club med or similar places.

An equal amount of water is goes up the yellow supply tube, and then down out the nozzles. Equal amounts of water in opposite directions -- so it seems obvious that the net force is zero and it can't work.

Once that central paradox is resolved, then little details like steering and underwater operation are easier to understand.

There are 2 things that break the "equal and opposite" symmetry, each of them providing some lift:

thrust from net change in velocity

Personal watercraft such as the WaveRunner and the Jet Ski and this JetLev take water in through the intake and then out through the jet nozzle. The water going out the nozzle is much faster than the water coming in the intake, so the drag from the intake is more than compensated for by the thrust from the jet nozzle. The net difference in speed of the water (from still lake water to relatively fast-moving exhaust water moving in one direction) leads to a net acceleration of the stuff pushing against the water (in the opposite direction). This effect would still happen if the pumping was done solely on the flying unit with a rigid pipe into the water.

While the pump on the boat is off, the water on the lake "comes up to" the painted water line on the boat -- i.e., that's the point where the downward force on the boat (gravitational force on its own weight) balances the upward buoyancy force.

The pump on the boat accelerates approximately stationary lake water upwards. The reaction force pushes the boat downwards, driving the painted water line underwater. Eventually the boat settles to a (lower in the water) position where the downward force on the boat (gravitational force on its own weight, plus the reaction force from pushing water up the tube) balances the upward buoyancy force.

Meanwhile, the piping at the top of the takes the high-speed water coming up the tube and turns it around. The change in direction of velocity leads to a net acceleration of that piping (and the backpack and pilot to whom it is firmly attached).

It's vaguely like shooting a water cannon straight up, and balancing a ball centered over that cannon.

This system also has similarities to the "Lofstrom loop".

It helps me visualize the forces involved if I picture the water as chunks of ice that move around.

A quick note on the mechanics, since the question has been asked again:

And from Newton's third law the boat/pump experiences a downwards force of:

At the jetpack the water does a U turn and is directed back down again at a different velocity $v_d$. So the momentum per second starts at $Mv_u$ and ends at $Mv_d$ and therefore momentum change is:

The velocity $v_d$ is negative (because it's downwards) so $F_{water} \le 0$ and the force on the water is downwards. Again we use Newton's third law to conclude that there is an upwards force on the jetpack of:

And that upwards force is why the jetpack flies.

Possibly this is clearer if we take $V_u$ and $V_d$ to be the magnitude of the up and down velocities. In that case we get:

Note that we can make $V_d$ as large as we want by reducing the nozzle size on the jetpack (assuming we have a powerful enough pump) so the upwards force on the jetpack can be made arbitrarily large.

Not the answer you're looking for? Browse other questions tagged forces momentum conservation-laws lift or ask your own question.

0
Given Newton's 3rd Law, how is a sea-pumped hydro jetpack possible?