What actually is meant by wave nature of electron or any other material particles? [duplicate]

Einstein has suggested that light can behave as a waves as well as like a particle i.e, it has dual character. In 1924, Louis de Broglie suggested that just as light exhibits wave and particle properties, all microscopic material particles such as electrons, protons, atoms, molecules etc. have also dual character. They behave as a particle as well as wave. This means that an electron which has been regarded as a particle also behaves like a wave. Thus, according to de Broglie,

all the material particles in motion possess wave characteristics.

Although the dual nature of matter is applicable to all material objects but it is significant for microscopic bodies only. For large bodies, the wavelengths of associated waves are very small and cannot be measured by any of the avalable methods. Therefore, practically these bodies are said to have no wavelengths. Thus, any material body in motion can have wavelength but it is measurable or significant only for microscopic bodies such as electron, proton, atom or molecule. And it is to be noted that electrons won't orbit the nucleus in the sense planet orbits around the sun, but instead exist as STANDING WAVES.

I am finding difficulty in understanding electron or other material particles to behave as wave. In order to understand electron in the form of wave, I considered the following example of high racing car. See the picture below. 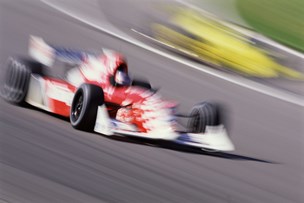 You can see that car is under very less speed compared to electron, it shows some what blur appearance, I considered this to be wave like in nature. And car has comparatively very very less wavelength, so that it can be considered as negligible, even though I considered it to understand. I assumed electron to be under similar position as the car, to understand what actually is called wave nature. Is it that as like car appears to be blur or some what wavy, electron also under immense speed show wave like appearance. But in reality car stays as material particle, even if it appears to be wavy. Is it the same thing what actually meant by wave nature of electron? i.e is it that electron seems to be wavy under high speed, but it will remain as particle during its motion?

Lets take this a step at a time:

What is a wave? In everyday language a wave is a disturbance in air, liquid or solid that has a periodic appearance in space and time, i.e. the shape repeats.

The fist "shock" to the scientific community of the nineteenth century came when trying to impose their understanding of waves to the electromagnetic theory of Maxwell which also gave wave differential equations for the electromagnetic field, i.e. light. "shock" because experiment showed that there existed no medium to wave up and down as the electromagnetic wave passed. Michelson Morley experiment disposed of the concept of a luminiferous aether

The discovery that in the microcosm it was quantum mechanics that ruled brought a greater revolution to the knowledge base of the physics community in the beginning of twentieth century. Observations showed stable atoms, the periodic table, and also interference patterns when very small dimensions were imposed in the boundary conditions of an experiment. A wave equation, the Schrodinger equation described atomic data very well, given the correct potential and boundary conditions to the solutions of the differential equations. BUT and it is a big BUT, the solutions described the data measured only if the postulate was made that it was the square of the function found, the wavefunction, that had physical meaning and, wait for it, the meaning was of a probability distribution and not of a real motion or spread of matter or energy in space and time. Electrons do not orbit the nucleus in orbits. Their location is described by orbitals. Orbitals are periodic functions that tell us what is the probability of finding the electron in a specific (x,w,z,t) when we make a measurement. The solutions are not mass or energy distributions in space, they are probability distributions.

What is a probability distribution? Take a dice: for each face there is a probability of 1/6 to show up as the face when thrown. The dice has all the faces and in that sense the electron has in potentia all the values of the orbital. It is a measurement : throwing of the dice or kicking the electron with a photon, that will define what the number seen is, or what the four vector of the electron was before being kicked out.

What does this mean for the interference patterns seen for electrons or photons or neutrons? It means that what we see is the probability distribution given by the solution of a complex quantum mechanical equation with the given boundary conditions before observation. An electron approaching the slit has a probability of going left or right and of being deflected by the boundary of the slits so that it manifests with a dot on the screen (detector) . There have been experiments with entangled photons such that one knows which slit the photon went through and still the interference pattern builds up. The particle stays whole. .The probability of detecting it at an x,y on the screen is what varies.

The wave nature of particles is a probability wave that informs us how probable it is to display a given value for position, energy... , when measured.

The image of the car is blurred because it's taken at a low shutter speed. But it nothing like a wave, if you used a high shutter speed you would see the car as if it were at rest.

The wave particle duality is not at all related to speed.

@Anna_v posted an excellent answer, but I would like to add some figures.

What is essential for understanding the wave-particle duality, is that:

For your convenience I present here two figures from the book by M. Namiki and S. Pascazio "Quantum theory of measurement".

The first figure below explains the experimental perpective of the wave-particle duality: 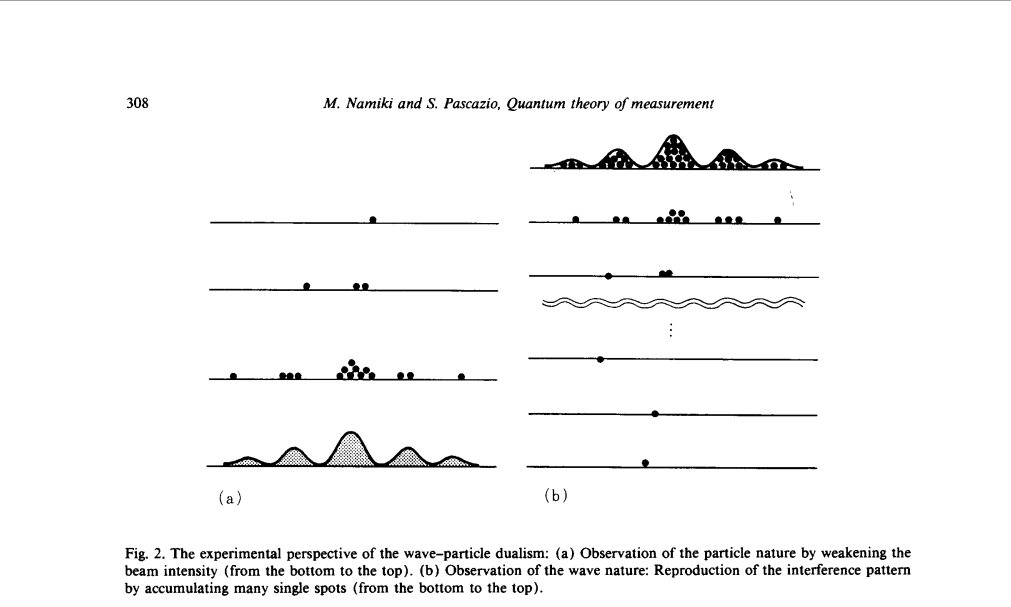 while the second figure is a photograph of the interferometry experiment performed by A. Tonomura 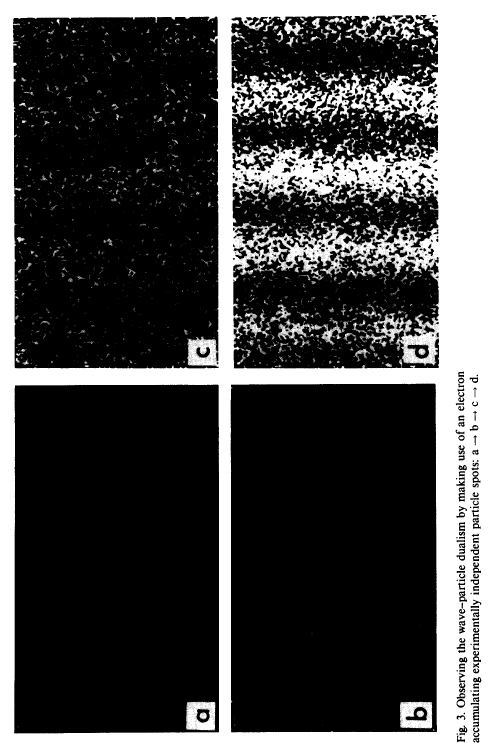 Not the answer you're looking for? Browse other questions tagged quantum-mechanics electrons wave-particle-duality or ask your own question.

19
Electrons - What is Waving?
2
Electron double slit experiment and the electric field

1
Why does Davisson-Germer experiment confirm electron's wave-particle duality?
10
How to tell theoretically whether an electron behaves as wave or particle
0
Will the wave nature of particles produce diffraction and interference effects
0
How the wave nature of electron manifests the information that it is charged?
4
De Broglie Principle
3
Is the electron actually a standing wave?