When Venus is the brightest when viewed from Earth?

Nowadays Venus is very bright. I can spot it during broad daylight without problem. It's because it's near Earth and appear as a crescent.

This made me think: as it's reaching the inferior conjunction the crescent becomes slimmer, so I expect that it will fade a bit. So there should be an optimal phase angle for optimal brightness.

So my question is at which phase angle Venus is the brightest when viewed from the Earth?

There is indeed an optimal angle where Venus is brightest. Have a look at the following figure: 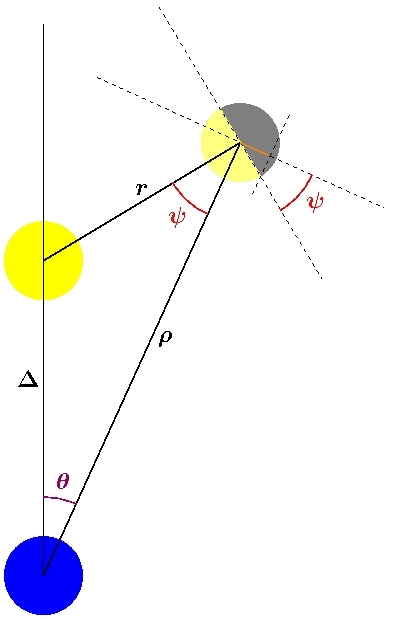 However, the surface brightness of Venus isn't the same at every point: the outer edges are somewhat dimmer than the central parts due to Lambert's law, so I overestimated the brightness. It also means that the true maximum brightness occurs when the planet has a slightly larger phase, but it would take us too far to calculate this.

Not the answer you're looking for? Browse other questions tagged astronomy planets or ask your own question.

10
Why is the surface of Venus so hot?
2
Observed gravity of Venus aside from the Magellan probe
3
Why do Uranus and Venus rotate from East to west?
19
What on Earth is this drawing of Venus?
12
Venus, Earth and Mars Magnetic fields
2
Why would the pressure on Venus crush you?
1
Is the cosmic event horizon viewed from Andromeda different from the one viewed from Earth?
2
Why Earth is viewed crescent from moon when the Earth is experiencing total solar eclipse?