Having the same number of neutrons

Sorry if this is a silly question.

Isotones are nuclides having the same number of neutrons. Magic proton or neutron numbers give the nucleus greater stability. Magic 82-isotone nuclides for instance:

Isobars are nuclides having the same mass number (i.e. sum of protons plus neutrons). The number of protons in beta-plus (beta-minus) decay decreases (increases) by a unit and the number of neutrons increases (decreases) by a unit, so that an isobar standing to the left (right) of the original nucleus is formed. It may be 1, 2 or 3 beta-decay stable isobars. Beta-decay energy of 154-isobar nuclides for instance: 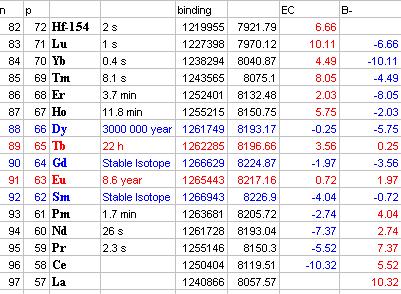 Isotones and isobars have great significance for studying of nuclide stability.

In both cases - equal $N$ or equal $A=Z+N$ - are less important than if two nuclides have the same $Z$. The number of protons $Z$ is by far the most important quantity that determines the character of the resulting material. It's because the electrons only feel the electrostatic force of the nucleus and it only depends on $Z$; it doesn't depend on $N$ or $A=Z+N$. A large chunk of matter has to neutralize the electric charge, so it has to assign the right number of electrons - namely $Z$ electrons for one nucleus.

Consequently, these $Z$ electrons get inevitably arranged into the shells of atomic physics and the properties of the material are therefore a quasi-periodic function of $Z$, the number of protons, as the periodic table makes very clear. That's why the chemical properties of e.g. iodium-127 and iodium-131 are almost identical while iodine-131 and xenon-131 are extremely different chemically, despite their having the same value of $A=N+Z$.

57
Why is technetium unstable?
4
Is there a direct relationship between an isotope's neutron count and radioactivity?