Angular momentum of particle rolling around inside of sphere

I have a hemispherical bowl in which I roll a small particle around the edge, starting from the top at point A with a velocity $v_o$. It travels halfway around the sphere and reaches point B, which is a vertical distance h below A, with a velocity $v_f$. Point A is a radial distance of $r_o$ from the vertical centerline and point B is a radial distance of $r$ from the vertical centerline. There is no friction. The goal is to solve for the angle, $\theta$, between the horizontal and the velocity $v_f$.

Here is a diagram of the problem scenario: 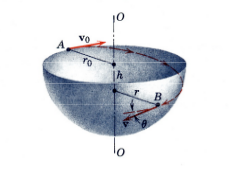 My solution relies on the assumption that angular momentum only relies on the velocities in the plane perpendicular to the vertical centerline. Is that a safe assumption? Also, when dealing with energies, is rotational KE and linear KE the same? Should I be taking RKE into account?

Your solution looks fine to me.

Yes: the angular momentum is preserved in the horizontal plane (the weight is vertical and the reaction of the sphere surface is a central force) so your first relation is fine, just remember that $\theta$ is not the vertical angle, but lies on the plane tangent to the sphere at point B.

There are two kinds of rotational energy: the one of the particle spinning on itself which would require the particle's mass distribution to be computed, which is not given so I assume it should be neglected. What may be confusing is the particle's rotational energy around the centre of the sphere: $$E=\frac{1}{2}I\omega^2$$ For a point like mass the moment of inertia is: $$I = mr^2$$ Remembering the relation between angular and tangential velocity: $$\omega= \frac{v}{r}$$ we get exactely: $$E=\frac{1}{2}mv^2$$ In fact for a point like mass it is exactly the same to consider the kinetic energy related to the tangent velocity, or the rotational kinetic energy related to the angular velocity, for this problem I approve your choice for the first one.

I do not have a solution, just some steps to get there.

I have parametrized the problem with spherical coordinates, $\varphi$ is the azimuthal angle (around the hoop), $\psi$ is the nutation angle (drop from horizontal plane) for a position vector

The derivate gives us velocity

First, you are right: in this problem angular momentum around the vertical axis is conserved. This is because all forces acting on the particle have no azimuthal component.

Second, for neglecting the rotational kinetic energy, there are ambiguities in the formulation of the problem. You wrote: "I roll a small particle". To my mind its meaning is that the particle would be rolling in a bowl, without slipping. The phrase "There is no friction" thus should mean there is no rolling friction, that is, mechanical energy is conserved. However, one may also prioritize the phrase "There is no friction" and assume that the "I roll" part to be imprecise way of saying that the particle will be sliding, without rotating. The first interpretation means that we have to make an assumption about the structure of a particle (or at least its tensor of inertia). Assuming that the particle is a solid uniform ball, and that its radius is small compared with the radius of curvature of the bowl $r_0$, the rotational energy due to the no-slipping rolling will be proportional to linear kinetic energy: $RKE = \frac 25 \frac {m v^2}{2}$. Then, your energy balance equation would be written: $$ KE_0+RKE_0 + PE_0 = KE_f+RKE_f. $$

Substituting the expression for rotational energy: $$ \frac 75 \frac{m v_0^2}{2} + m g h = \frac 75 \frac {m v_f^2} 2 $$ Note, that this equation could be made looking like your original energy conservation equation (without rolling) if we redefine parameters $m$ and $g$: $$ m' = \frac75 m, \qquad g' = \frac57 g, \qquad m g = m'g', $$ will gives us energy equation same as without rotation. Since mass can be eliminated from all equations, and energy equation is the only one containing $g$, such 'renormalization' is consistent with the rest of the equations.

Third point, is that you made a mistake. To understand that, take a limit $v_0 = 0$, $h\ne 0$, which correspond to particle sliding down the bowl without any angular momentum. Your answer will always give $\theta=\pi/2$, while the correct answer should be $\theta = \arcsin (h/r_0)$.

Not the answer you're looking for? Browse other questions tagged homework-and-exercises classical-mechanics angular-momentum or ask your own question.

2
Deriving the equation for the speed of a block down an incline using work - keep getting the wrong constant
4
Conservation of angular momentum during rolling
1
Is there some other kind of angular momentum than the rotational one, and what is it?
4
Throwing a ball from the surface of the earth so that it ends up in a circular orbit
2
Angular momentum of rolling sphere confusion
0
For a skater skating down a quarter circle, how to calculate the normal force from the ramp on the skater as a function of time?