Throwing a ball upwards in an accelerating train

If I throw a ball upwards to a certain height in an accelerating train, will it end up in my hand? At the moment I release the ball, it will have a velocity equal to that of the train at that instant. But because the train is accelerating, the train will have a greater velocity and thus the ball will travel lesser distance and should fall behind me. Is my reasoning correct?

User Sahil Chadha has already answered the question, but here's the math and a pretty picture for anyone who is unconvinced that you're right. 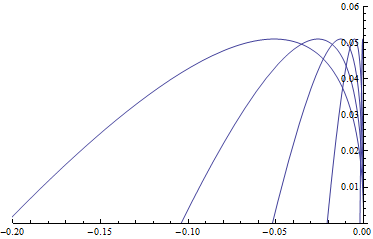 From the point of view of someone on the train, the ball flies backward in a sort of deformed parabola, but the smaller the acceleration is, the more it simply looks as it would if you were to throw a ball vertically in an un-accelerated train.

Yes your reasoning is correct,from the point of view of train the ball will travel in a tilted parabolic path as direction of apparent gravity will be different in the train and will not end up in your hand

when you launched the ball upwards,as at that instant when the ball is in air and it falling possibilities should be on the palm but practically,I think its not possible it will return to your palm because no driver can maintain an exact uniform speed without changes.Only machines or robots can do so.The person also launching the ball cannot be so accurate because there will always be reduction in useful energy.

Not the answer you're looking for? Browse other questions tagged newtonian-mechanics reference-frames projectile or ask your own question.

4
Will a ball thrown straight up in a train land in same spot (in real world)?
1
Estimating atmospheric friction by measuring the change in velocity of a ball thrown straight upwards
1
$V_{\rm ball}=V_{\rm train}+V_{\rm ball}$?
1
Motion of dropped object relative to an accelerating observer
9
Inertia on a rotating disc?
0
Throwing/Dropping an Object
0
What happens to the momentum of earth-ball system when a ball is thrown upwards?