Minimum number of interacting particles to form a plasma

After reading this question https://physics.stackexchange.com/questions/82486/what-is-the-minimum-number-of-electrons-necessary-to-propagate-a-plasmon I began to wonder what is the minimum number of particles needed to have a plasma? I figure that you need at least two to have density oscillations, but I would imagine you would need quite a bit more to have anything that resembles debye screening. I know that the solar wind plasmas have a number density on the order of unity so I dont think its an issue of $n_e$. Thanks!

It actually turns out that the number density is an important aspect of defining a plasma. The general definition is

The three conditions for exhibiting collective motions is temperature and (number) density dependent, stemming from the Saha equation, are

Pictorially, one can see it from the following image (which comes from one of Hans Goedbloed's lectures, specifically MHD1.pdf at the bottom of the linked page). A slightly different version of this image appears in his book Principles of Magnetohydrodynamics (co-authored by Stephan Poedts). 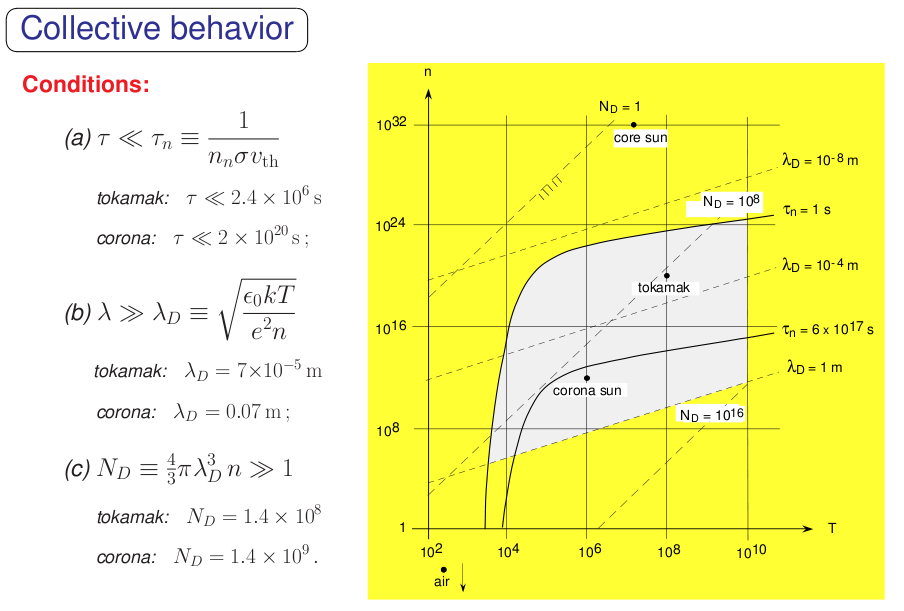 The caption in the book reads,

Conditions for collective plasma behaviour, in terms of the density $n\equiv n_e\approx Zn_i$ and temperature $T\sim T_e\sim T_i$, are satisfied in the shaded1 area for time scales $\tau<\tau_n=1\,{\rm s}$ and length scales $\lambda>\lambda_D=1\,{\rm m}$, where $N_D\gg1$ is also satisfied. The restrictions on the upper time limit of low density astrophysical plasmas quickly approach the age of the Universe, whereas the restrictions on the lower length limit for high density laboratory fusion experiments approach microscopic dimensions.