Could anyone help explain this current voltage graph for an LED in liquid nitrogen?

I've been doing my coursework investigating LEDs at various temperatures and I've come across an interesting phenomenon which nobody I've asked has been able to explain thoroughly - wheras at room temperature, the LED gives a standard exponential response, when placed in liquid nitrogen (at -196 C) the graph is pretty strange. This data was recorded using a constant current power supply, and is a combination of three different experiments - it still worked fine after each experiment at room temperature.

I've asked a couple of my teachers, and the answers they gave ranged from 'the lattice might change and contract at cooler temperatures' to 'the internal temperature of the LED might increase when it has higher currents'. I was wondering if anyone had any more domain-specific knowledge than my teachers and could help explain this :)

Here's the graph of this particular LED at room temperature (around 24 C in this case): 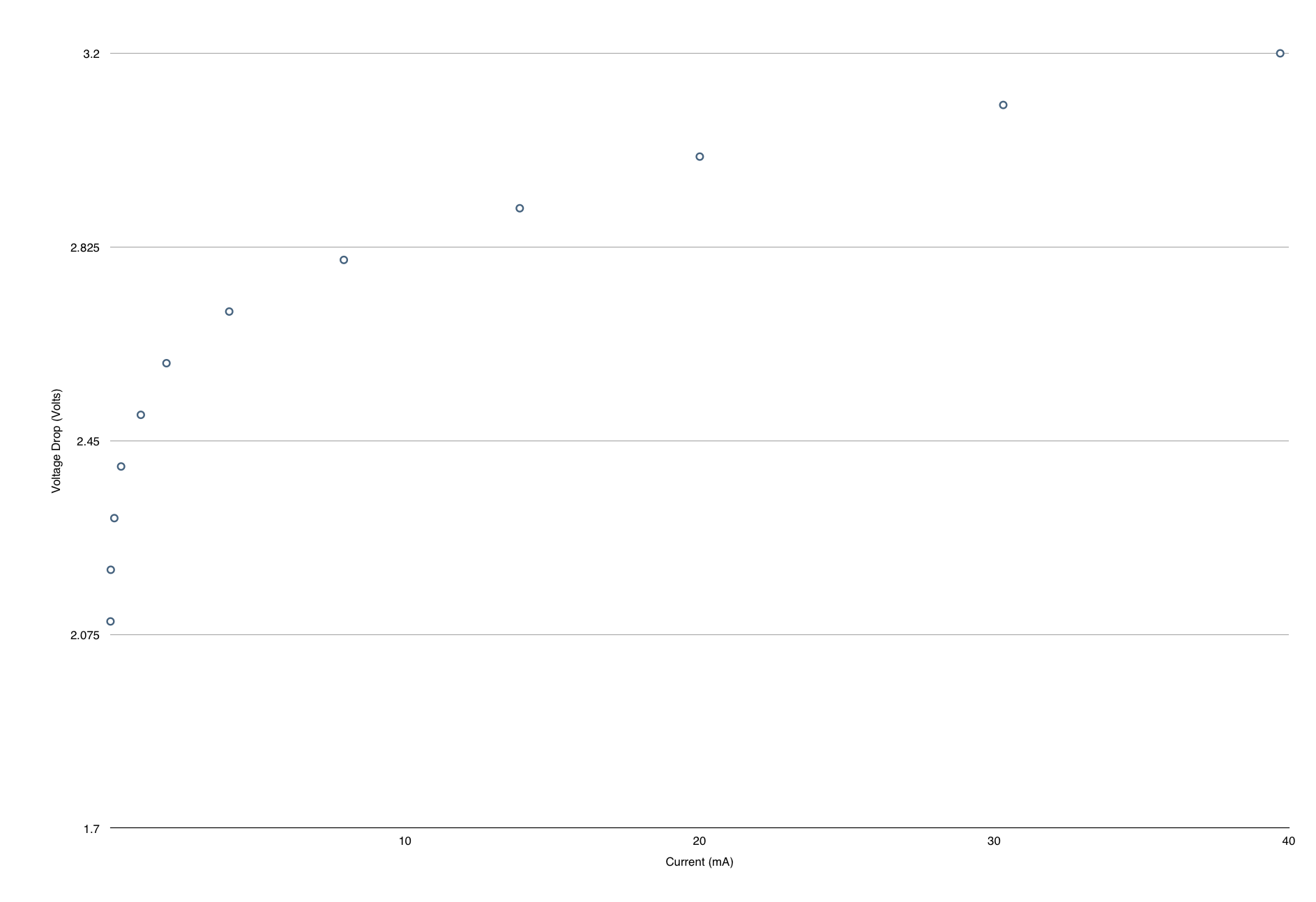 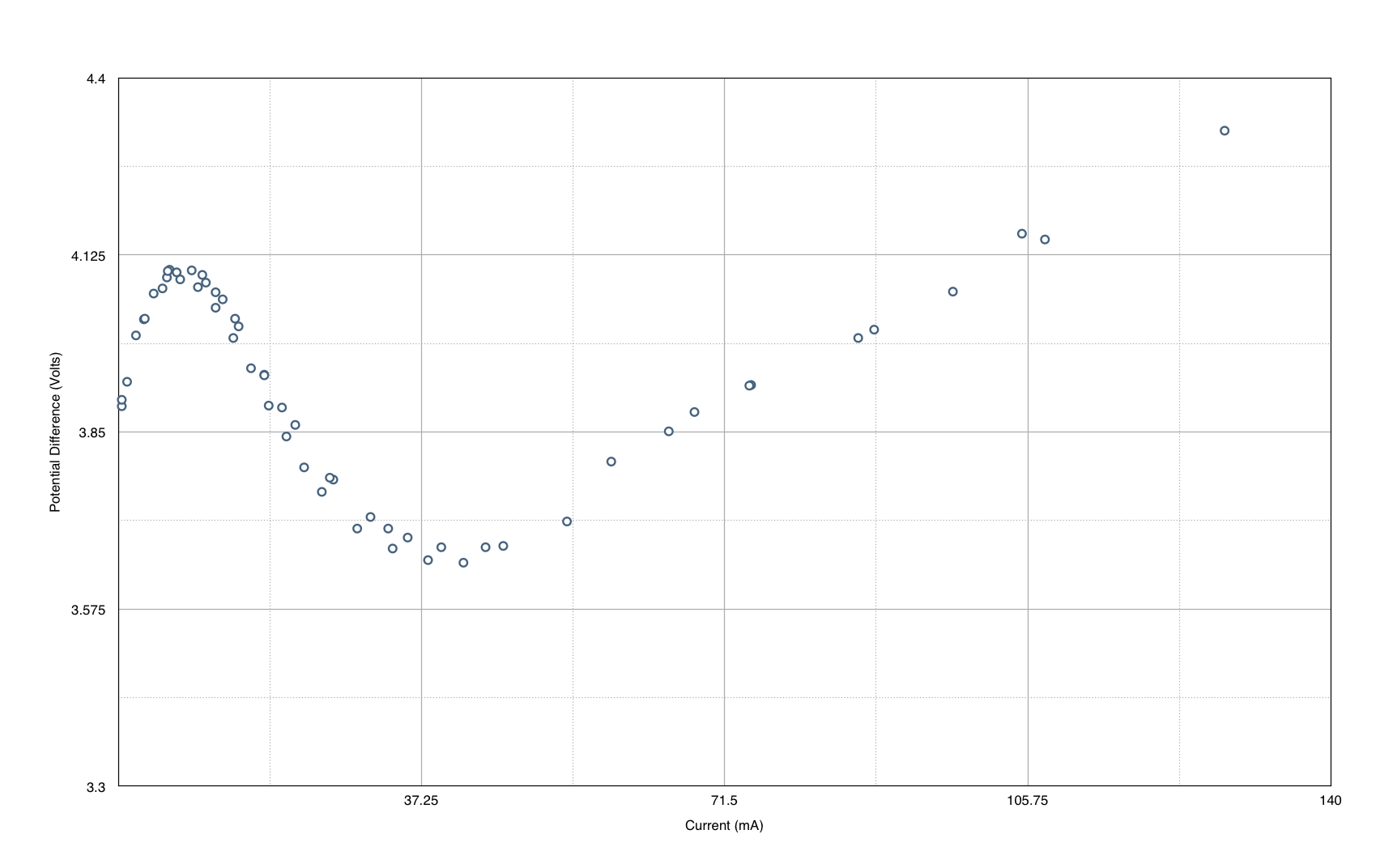 There are really two questions here (I think):

CuriousOne already hinted at the answer - this has to do with the temperature of the LED. In particular, the voltage developed at constant current is much greater at low temperatures.

In the case of the device immersed in LN, the heating will initially be quite small as the current is small. Thus the junction temperature does not change much. But once the current increases, so does the heat dissipation - and then the junction heats up and the forward voltage will drop. As CuriousOne suggested, very short pulses of current of different magnitude might remove some of that effect. In fact, LEDs are known to be more efficient (quite a bit!) when driven with a pulsed rather than constant current - this is mostly related to the saturation of absorption centers in the lattice (bleaching) but also somewhat to heating effects.

In this equation, the thermal voltage $V_T = \frac{kT}{q}$ - the Boltzmann constant times the temperature divided by the charge on the electron.

Since Boltmann constant and charge are constant, it follows that the thermal voltage scales with temperature: and the saturation current $I_S$ depends strongly on temperature (it is much lower when the temperature is lower, as there are fewer electrons which have sufficient energy to cross the bandgap).

There is a better analysis of all this at this educypedia link where they explore and graph the behavior. Specifically, it explains that the strong temperature dependence of the forward voltage relates directly to the saturation current, which itself is a strong function of the bandgap (quite large for blue LEDs) and temperature. This is the effect that I believe dominates here.

The temperature of the LED increases. Do the same experiment with short pulses of current (1ms repeated once a second) and you will see that it's a temperature effect.

Not the answer you're looking for? Browse other questions tagged electric-current voltage light-emitting-diodes or ask your own question.

1
What does the current vs voltage graph of a halogen look like?
5
What determines the forward voltage drop for a diode?
3
What is the mechanism behind the halo around LED lights?
11
Ruby fluorescence activation spectra
3
Why LED light changes color when dips into liquid nitrogen?