Is band-inversion a 'necessary and sufficient' condition for Topological Insulators?

Band inversion is a necessary but not sufficient condition for topological insulators (TIs). For band TIs you need to evaluate the topological (or $\mathbb{Z}_{2}$) invariant defined by Fu, Kane and Mele in Eq. (2) of:

This approach involves computation of the Pfaffian of a matrix whose components are the expectation values of the time-reversal operator between different Bloch bands. Personally, I don’t find this approach very intuitive. So let me pick a simpler case where the material has inversion symmetry; in this case Eq. (2) of the previous paper reduces to Eq. (1.2) of:

The above equation basically says that the overall parity of all the filled Bloch bands, evaluated at the Time-Reversal Invariant Momentum (TRIM) values ($\Lambda_{i}$), determines the topological invariant ($\nu$) of the insulator. For example, if (say) the conduction band (say $s$-like) and valence band (say $p$-like) have even ($\xi_{2n} = +1$) and odd ($\xi_{2n} = -1$) parities at a TRIM respectively, and a band inversion occurs between only those bands, then the product of the band parities of the filled bands would pick up an extra minus sign. In this case the band inversion signifies a topological phase transition. In other words, the number of band inversions occurring between bands of opposite parity has to be odd to get a TI. Once again, this is true for inversion symmetric insulators; we have no choice but to use the first (more complicated) formula for an inversion asymmetric insulator. However, the simpler (inversion symmetric) case hopefully illustrated the subtleties in band inversion.

Now, as for your second question, the answer is that time-reversal symmetry guarantees at least one pair of gapless edge states (or at least one Dirac cone) on one edge (face) of a 2D (3D) topological insulator. This has to do with the circumvention of the fermion doubling theorem on a particular edge (face) of a 2D (3D) topological insulator. For simplicity, let me only stick to the 2D case. Due to the nontrivial bulk topology in a TI, a 2D TI will have odd pairs (or Kramers pairs) of edge states. For example, see the figure below. The purple blocks are the bulk states whereas the red and blue lines are the in-gap (i.e. bulk gap) edge states. 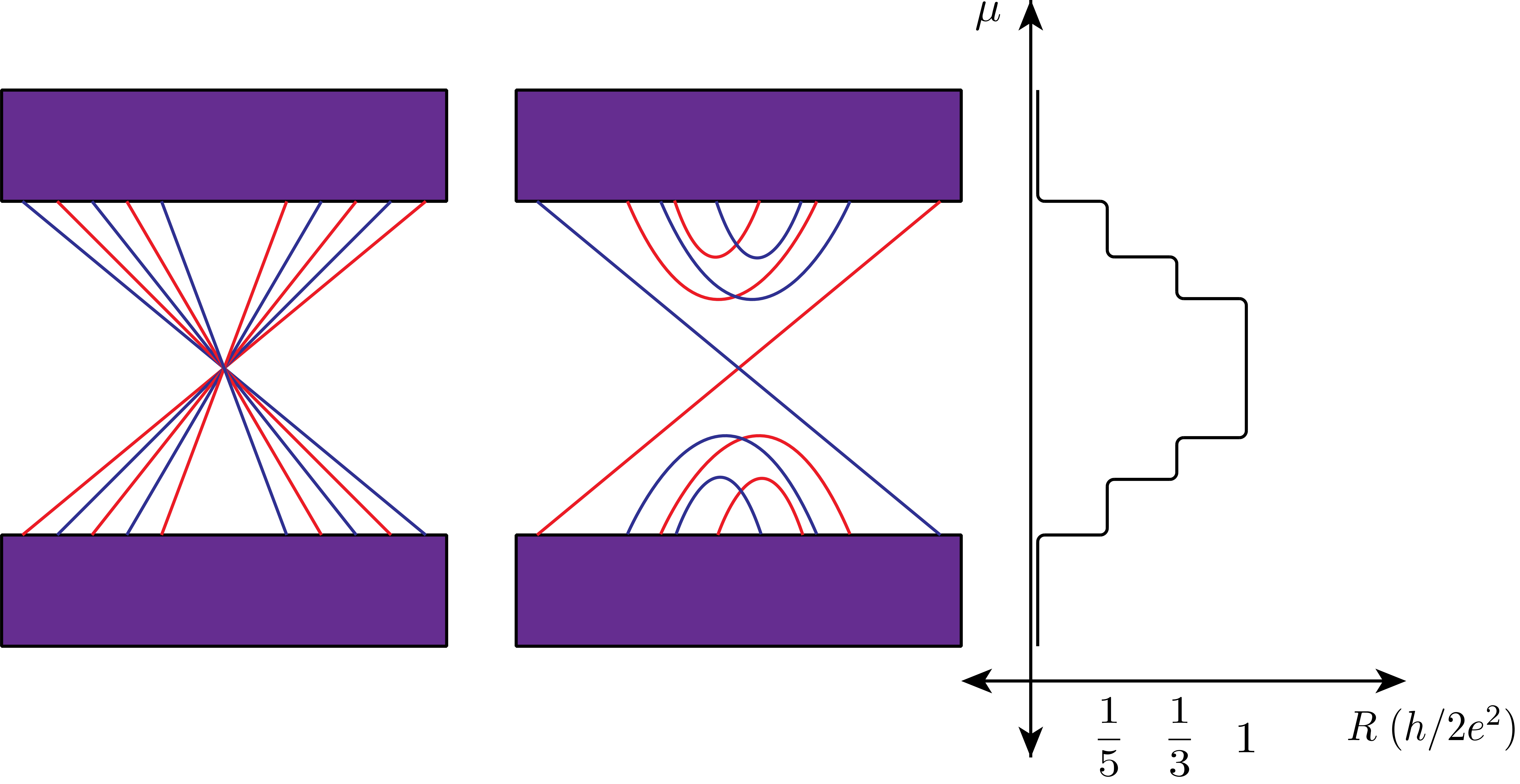 I wouldn't say so. The "topological" part of this kind of insulators come from a different Chern number. For a simple naive picture I suggest the paper of Haldane published in prl 61.2015.

Not the answer you're looking for? Browse other questions tagged topological-field-theory topological-insulators topological-phase or ask your own question.