We all know the Winter Solstice comes on December the 20th or 21st, which is (by definition) the shortest day of the year.

I would understand a technical explanation, but I am asking for a widely-understandable, simple one. 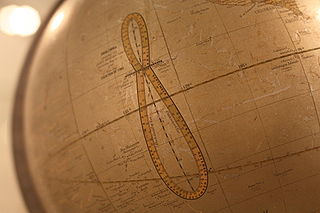 Pictured: an analema on a globe.

It is happening because of the acceleration of the Earth orbital speed around the Sun (Earth is near the perihelion). Between December 13 and December 31 the Earth is speeding up and also it is normally rotating around its axis. These 2 movements (constant rotation and increasing orbital speed) add up to create the observed apparent movement of the Sun on the Earth sky. The Sun rises later and also sets later every day.

It is a bit tricky to visualize, so try it with a globe.

There are two causes of this and other effects which are basically that noon as measured by the Sun, i.e. when it is due south, is usually not the same as noon by local clock time. The two phenomena are: the speeding and slowing of the Earth in its elliptical orbit round the sun, and the inclination of the Earth's axis to the plane of the ecliptic. If we kept clock noon the same as Solar noon, then days would vary rather awkwardly in length through the year. Here at latitude 52 degrees North, noon today, 4th December, is about 11-53, and changes quite rapidly to 12-07 p.m. in a month's time. It "drags" dawn with it, so mornings stay dark well into January, while sunset begins to advance, giving us short mornings and longer afternoons.

At any particular location, the situation is made slightly more complicated by the use of time zones.

It's the reason why we have "Greenwich mean time, which is calculated as though the sun moved at a constant speed in a circular path round the Earth, to give us days of equal length, exactly 24 hours between successive noons. (almost exact-- someone will cavil)

This effect is rather curiously known as "the equation of time" and a good account is given at: http://en.wikipedia.org/wiki/Equation_of_time. There is a detailed description of time and its measurement in the book "Greenwich Time and the Longitude" by Derek Howse, published by Greenwich Observatory.

People that live on the equator have 12 hours of day and twelve hours of night all year ! If the earth's axis was perpendicular to the plane of its orbit (ecliptic) everyone would have twelve hour days and nights all year. But that ain't the model. The axis is ~ 23.5 degrees to the perpendicular. The plane containing the Earth axis and the line from earth center to sun center is perpendicular to the ecliptic twice a year ,i.e. the solstices . These do not coincide with earth's apogee and perigee about the sun .

Currently, the Earth reaches perihelion in early January, approximately 14 days after the December Solstice. At perihelion, the Earth's center is about 0.98329 astronomical units (AU) or 147,098,070 kilometers (about 91,402,500 miles) from the Sun's center.

a good read may be found at

MAY THE FORCE BE WITH YOU !

Solar noon is the time of day when the sun reaches its highest point in the sky, as seen from any particular place on the earth's surface. A solar day is the length of time that passes between solar noon on one day, and solar noon the following day.

The earth takes 23 hours, 56 minutes and 4.09 seconds to spin on its axis. During that time, it also traverses a short distance around its orbit around the sun - approximately one degree of angle - which causes a change in the apparent position of the sun in the sky. In one solar day, the earth must complete an entire rotation on its axis, plus rotate a little more to compensate for that extra (approximately) one degree of angle that the sun appears to move. This little extra rotation takes 3 minutes and 55.91 seconds on average, meaning that the average solar day is almost exactly 24 hours.

However, there are two effects that cause the time taken for the extra rotation to vary substantially. They must both be taken into account, when calculating the length of the solar day. In particular, towards the end of December, the solar days are approximately 25 seconds longer than the annual average.

The earth's orbit is not perfectly circular, so generally, it's not travelling exactly at a right angle to the sun. This means that the sun is sometimes pulling against the earth's motion, slowing it down; and sometimes pulling with the earth's motion, speeding it up. The effect is very slight - the earth travels about 1.7% faster than its average when it's closest to the sun in early January; and about 1.7% slower than its average when it's furthest from the sun, in early July. This means that the extra angle that the earth has to make up, from one solar noon to the next, is greatest in December and January, and least in June and July. This has the effect of lengthening the solar days by about 4 seconds at the start and end of the calendar year; and shortening the solar days by about 4 seconds in the middle of the calendar year.

7
Formula for getting time of sunrise at a particular location?
4
Why isn't sunset time in sync with solstice?
1
How does the winter solstice relate to the “longest night”
4
Fall/Winter Viewing
4
What's the reason for the seasons?
2
Sunrise time across the globe?
9
Is there any dynamical reason for the winter solstice to happen close to the perihelion?
5
Celestial Time-Keeping and Navigation
5
In the calculation of sunrise, where do the magic numbers come from?