Physics of the inverted bottle dispenser 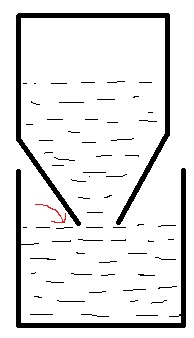 Also I'd like to let you know that, if you pierce the upper part of the bottle with a small pin, then the water level rises and overflows out of the container. I'm assuming air from outside rushes in and pushes the water out.

It took me quite some time to clearly understand the experiment you're describing.

Actually, pouring a full bottle in a container is a quite intriguing thing. 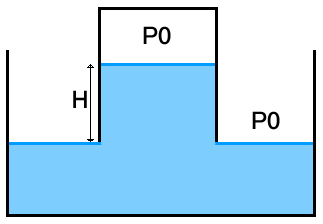 This of course is an unstable situation, as the pressure $P_0$ cannot be at the same time the pressure of the air in the bottle, and the atmospheric pressure since the height of water in the bottle is higher than the level in the container.

So we should quickly get to this configuration instead : 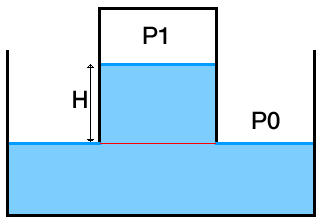 Notice that in the picture as well as in this calculation, we consider the height $H$ to not have changed, i.e. very little water has moved out of the bottle into the container. We'll see why now.

What is now the volume of air in the bottle ?

For this numerical estimation I took a water height in the bottle of $10 \, cm$. The variation in volume is so small, it will be hardly noticeable !

The reason why pouring the bottle is intriguing is that it empties itself in bursts. A bubble of air gets in, and water gets out at once. But if you do it in a controlled way, you will end up in the initial configuration I described, and from that point onwards, no air can get in. The variation of volume of the air in the bottle we just obtained obviously corresponds to a volume of water that gets out of the bottle, but again, it is small, and hardly noticeable.

What if you take a longer bottle ?

gigacyan is right, something will happen after a while. Recall that I did the calculation assuming the amount of water exiting the bottle is very small, this assumption is now false. If you have a significant height of water, the pressure will be enough to push out quite a bit of water out of the bottle, in which case the pressure of the air in the bottle will go down, and the level of water in the container go up.

Several interesting remarks can now be made.

Now, if you think about trees, at first you may imagine they rely on capillary action to carry sap to their leaves, but that can't be the case, as the pressure drops too much after 10 vertical meters against gravity. Any presence of air would make the wood crumple under its own applied pressure.

Which means there is absolutely no air whatsoever in the sap canals of a tree (a.k.a. xylem).

The trees rely principally on another mechanism to pump up sap, known as evaporation. This easily produces (highly) negative pressures in the sap, and the actual limit to the size of a tree is the point when this pressure is small enough that a cavity of water vapor spontaneously appears in its canals, through cavitation. Pull hard enough on water, and you will create two interfaces and evaporate some of the liquid ! This cavitation pressure is around $-120 \, MPa$.

This catastrophic failure is know as embolism, and is also a bad health condition for humans (a gas bubble in a blood vessel).

Your mistake is to assume that the water will stop "no matter how long a bottle you take". It will not - you just need a longer bottle than you expect. To be precise, you need a column of water 10 meters high to counteract atmospheric pressure.

Water stops draining from the jar into the dispenser once it forms an interface as draining of more water would result into the formation of a vacuum in the jar because no air can rush into the jar to displace the water as it has an interfacial-lock.

Now since $P_{bottom} > P_{surface}$! No further water drains (flow from lower to higher potential/pressure is not possible).

Other answers are right, but let me put it without math:

Water can't come out of the bottle if air can't go in.

(Except: if the water in the bottle is so tall that water can come out even if air can't go in.)

Not the answer you're looking for? Browse other questions tagged newtonian-mechanics classical-mechanics fluid-dynamics pressure water or ask your own question.